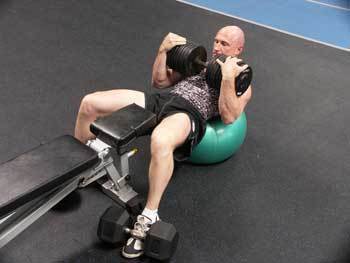 I was reading the recent article on Paul Chek; Deconstructing Paul Chek

There’s an image on there that reminded me of a problem discussed a few days ago. If your feet are trapped while performing crunches, doesn’t your body recruit your hip flexors instead of the rectus abdominis? What’s the solution to this problem?

Here’s the image, note his feet are secured by weights;

The actions of each muscle group are different, and a decent bodybuilder should understand the difference between using their hips and using their abdominals.

Focus on pulling your ribcage towards your pelvis and squeezing the abs, rather than going through the motions of sitting up and flopping down.

If it’s still a problem for you or you’re looking for a way to hit your abs without having to really think about, spread-eagle situps are a good option in my opinion.

If your feet are trapped while performing crunches, doesn’t your body recruit your hip flexors instead of the rectus abdominis? What’s the solution to this problem?

You said it yourself, the hip flexors are recruited, they’re not directly targeted, kinda the same way that forearms are recruited during pull-ups. It’s normal, and not a major problem as long as you realize that it’s just part of the exercise.

You could de-emphasize them by focusing on bent-leg or legs-in the-air crunch variations, which removes most of the static hip flexor work. But the only way to really “deactivate” the hip flexors 100% is with something like a Janda sit-up, though, I’ve found those to be more difficult (technique-wise) than they’re worth.

Here’s the image, note his feet are secured by weights;

Notice that he’s not actively pulling against the dumbbells with his feet (which would further involve the hip flexors). They’re there for stability and to keep him in place, that’s it.

Haha… well I received this in my Daily Dose email, I assumed they just posted it.

Was thinking about this yesterday before doing hanging leg raises. If your legs are locked in something (like those dbs) and you are pulling yourself up with your legs, then your hip flexors are being recruited.

The extent of their recruitment in relationship to your abdominals depends on how you are doing it. It is very possible to curl yourself up entirely with your hip flexors and only use the abdominals isometrically.

The opposite is true as well, and that is what i did for hanging leg raises. I focused on curling my pelvis forward (crotch to ribs) and relaxing my legs and most of the work was done by my abs.

Hope this helps, but sometimes you want to recruit them together, especially when doing your heaviest sets of situps.

I was just thinking about this some more and had a question someone might be able to answer.

So for movements involving the posterior chain, its optimal that the glutes and hamstrings are responsible for extension and that the lower back just contracts isometrically. Is the same possibly true for the anterior chain?

Is it best on something like hanging leg raises or situps for the abs to contract isometrically and the hip flexors do all the work?

This might warrant usage of an ab wheel as well.

I think that along with these methods mentioned previously it i for the large part a neural activation pattern. It can be effectively achieved through motor-unit activation drills similar to Janda and other.