Would this be considered as having “low” or “high” lats, or somewhere in between? Back is a weak point, and I’ve been wondering about this for a while now. Thanx in advance 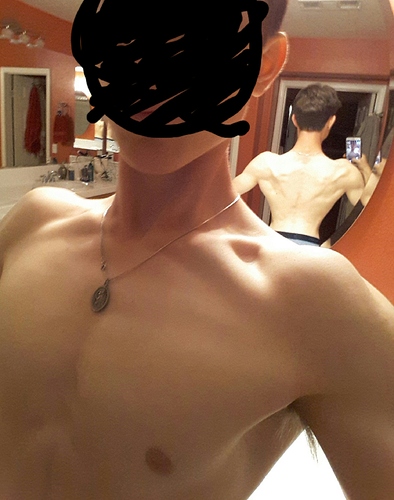 ADONIS IS ENVIOUS OF THE SHAPE AND LINES OF YOUR BACK!

Just build it up. In a few years, after you’ve gained 20-30 pounds it will be really great.

Such words are ever-gratifying, so first thank you for that. What I meant by weak point perhaps wasnt genetically speaking, but in terms of how it compares to other body parts of mine; in terms of actual development of my back and lats, it is subpar, despite shape. But back to the essential question, would it be safe to say I have “low” inserting lats? I am led to believe lower is better, but it’s hard to tell; probably because of this lack of development (hard to exactly see where my muscles attatch.) As u can probably tell the lower section (of my back) is much less developed (compared to upper,) and it just makes it hard to tell.

Would this be considered as having “low” or “high” lats, or somewhere in between?

I’d say you’re in a good spot and not at a stage where that needs to be a real concern.

For context, what’s your current weight and what weights/reps are you handling on basic back exercises (pulldowns/pullups, rows)?

But back to the essential question, would it be safe to say I have “low” inserting lats?

what makes this question ‘essential’ to you? Will it affect how you train, eat, or compete? It seems to be the opposite of essential. I would call it ‘inconsequential’.

Worry about things that matter, or at the very least, things that you can do something about. Your muscle insertions are what they are, there’s no changing it. Put a shit ton of muscle there, and the question will truly be irrelevant.

What your saying is true. And merely agreeing with you would be an understatement because I honestly understand, and believe, everything you just said. It is not important. Simply put, I have curiousities and questions as well as issues and anxieties with my physique that I can’t help but dwell on. Anyways, what you said registered. Thanks for the insight.

Well, my back training for the most part has always revolved around variations of row movements. Barbell, cable, dumbell, overhand and underhand, heavy and light work. Generally speaking, I have 80-100 pounds on the bar while still maintaining good form on row movements. I also implement pulldowns and deadlifts and some others but thats about it really (my gym situation is limited.) Basically I’ll do anything that will give me a good contraction and work the back. For context: max deadlift: 185, lat pulldowns 80 pounds of 8-10 reps for 3-4 sets. These numbers are a bit old (haven’t properly lifted in just over two months now) which I didn’t want to mention but might as well at this point so that you know my situation. I moved out of my parents in June (partly because of this bodybuilding shit I’ve gotten myself into) and have had no access to a gym whatsoever, let alone the shitty one back at the house. Just recently (two weeks now) I got a job, and have a stable financial situation along with my diet and now my first gym membership. Back to the point, this last two months or so of not training with weights, I tried calisthenics for the first time- something that once was a big fear of mine (I used to be considerably heavier, and simple things like pull ups I was inable of doing) You mentioned pullups, something I can proudly say that i have built up a general session at my city park consisting of say 7-10 reps for 4-6 sets with sensible rest imbetween sets. May not sound like much, but it is huge for me. A year ago this time I’d be lucky if I could break out 5. But that combined with my lifting prs should maybe give you an idea of where my back is at. Partly the reason why I am asking about my back is because my body is currently in a very natural state (limited training, normal diet, low bodyfat) so what is there is the real me, and I want to know my capabilities, strengths, and weaknesses upon starting this new chapter in building my physique. Alright, I’m done. Sheesh! But yeah as you can tell I am fairly weak in my lifts especially in the back and almost anyone will just tell me to just keep at it, but this is my back training and strength, as requested.
Oh and I’m currently 142.3 pounds

it’s totally understandable. I remember dwelling on the same sorts of things when I started lifting. lat insertions, bicep and tricep insertions. I spent way too much time trying to decide which bodyparts were genetically favorable for me and which weren’t. And because I was so internally focused on these things, I spent too much time in the gym trying to work on my weak points. For every set of wrist curls I did, I should have been bench pressing. Or doing dips. Or pull ups. Or any number of more effective lifts. What I learned, over time, is that until you’ve really put on a lot of muscle, you simply don’t know where your strong and weak points are. When I started doing leg work, I thought legs would always lag. Now they’re a strong point. My shoulder structure looks entirely different from when I started lifting. Everything changes once you start piling on the muscle.