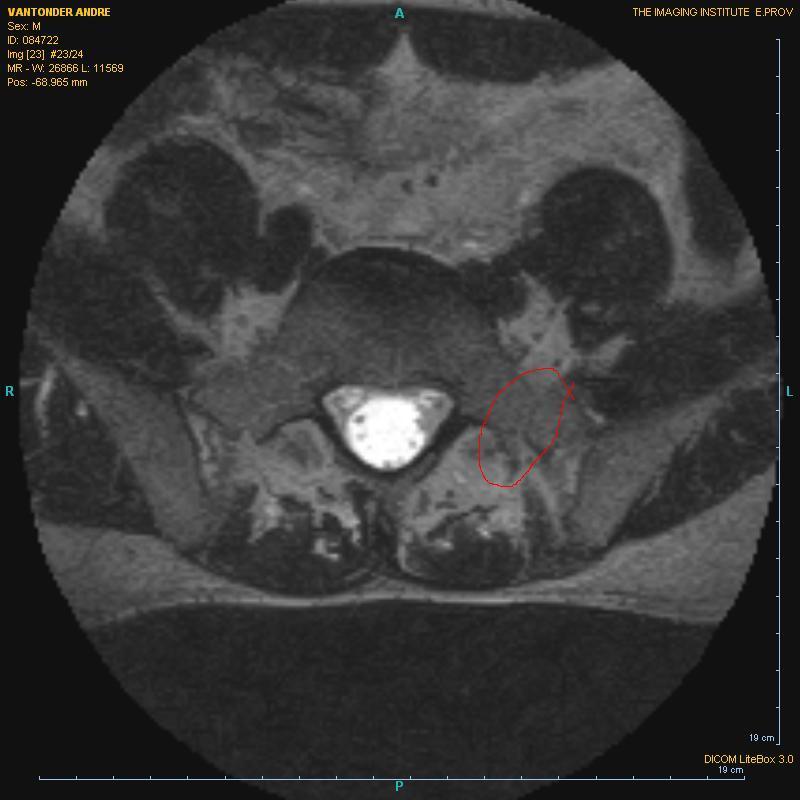 I recently got a new spine MRI for chronic LBP that just does not improve after 8 months. According to the radiologist, my discs are pretty much fine. He did not comment on the feature I indicated in this picture (at the S1 level) that looks a little suspicious to me (like a fracture), but what do I know. Before I go bother my doctor and maybe look like a fool, ids there anyone here who could comment? This is the axial T2 view of S1.

Hmm… Looks like the feature you circled is also present on the left. Now I’m not a medical doctor, but my understanding is that the sacrum and hip bones are not fused together, rather held together by ligaments.

Could be where the ligaments are attaching the sacrum to the ilium. On the other hand, the structure you circled does look like it may have some jagged lines to it. If you’re really concerned, you should ask your doctor to explain the scan to you.

Look at the image of the pelvis here: Sacrum - Wikipedia

Then go look at the more detailed figure 4-145 here:

Thank you for the response. Unfortunately that book and the image are not visible to me.

The other link I found through a google search, so it should be public domain.

No, the book you referred me to does not seem to be public domain. All that are available to me are section headings.

[quote]KSman wrote:
Have you been using an corticosteroids like prednisone?[/quote]

I did a couple of short courses of prednisone when sciatic symptoms were bothering me.

[quote]KSman wrote:
Have you been using an corticosteroids like prednisone?[/quote]

I did a couple of short courses of prednisone when sciatic symptoms were bothering me. [/quote]

I would bypass the family Dr. and go straight to Orthopedic Dr. or Neurosurgeon. Tell them straight up you are not interested in surgery. This way you get treatment options other than just surgery. What type of symptoms are you having? What type of workout do you do?