I am taking am art class and for one of the assignments we had paint eyes. For my piece I used 3 portraits of my grandfather as a child, adult, and old man. I am just about done with the last piece but, can not find a good name for it and since it will be on display it needs a description. Maybe something about passing of time, a quote??? I am at a blank…I am terrible at this… Any Help?

“Wisdom comes with winters” -Oscar Wilde. Don’t put that at the top of the list, I’m sure I can think of more exuberant quotes with time.

Posting a picture of it will be helpful. Hard to come up with a name without knowing the style imo.

Eye See Wut U Did There

You could name all three of them his first name or his first name followed by a number and let the viewer figure it out and ponder if it’s the same person, related men of different generations etc. Personally I’m not a fan of titles that spell it out too much but I’m not a fan pr pretentious titles either.

So if his name is Fred, then you could have Fred #1,Fred #2, Fred #3 or you could even include his last name but to me the first name only implies a personal relationship, of course if you share his name that’s another hint.

I did a self portrait that turned out to look more like my mom when she was young so I named it her full name and since we share a last name and there was resemblance there was a clue but it wasn’t obvious to anyone who didn’t know her she was my mom.

[quote]Big Kahuna wrote:
“Wisdom comes with winters” -Oscar Wilde. Don’t put that at the top of the list, I’m sure I can think of more exuberant quotes with time.[/quote]

I will get a picture up when they are finished. The medium is acrylic on wood panel.

You could name them using the seasons. Spring=child, Summer=adult, Winter=elder, of course it would probably be better with 4 paintings.

Riddle of the Sphinx?

You are an artist now, leave your audience room to speculate.

Just what I was thinking.

“Eyes Without A Face”

However, you’ll have to display it with this song playing from a cassette on a huge boombox to get the full artistic effect.

Or, you can play the song in-synch from reel-to-reel, vinyl LP, and mp3 to catch all the generations.

Eyes without a face. Such a human waste.

You can send the royalty checks to RAPEAXE!!! Enterprises Headquarters.

The best is already taken: That Which I Should Have Done I Did Not Do, by Ivan Albright, one of my favorite painters and best titlers of paintings who ever lived. 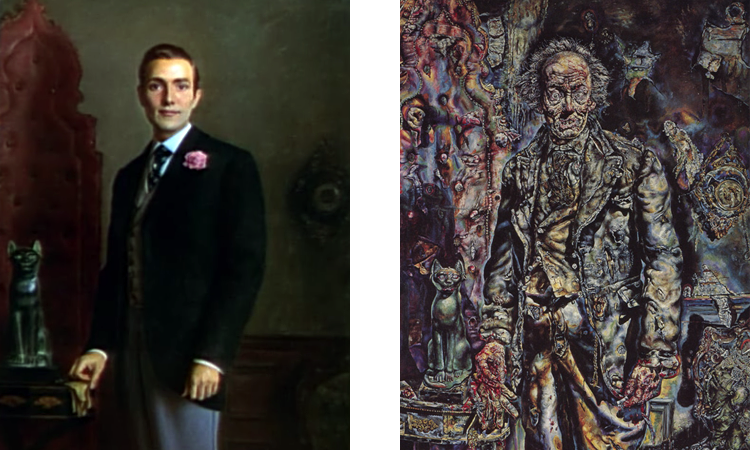 That Which I Should Have Done I Did Not Do