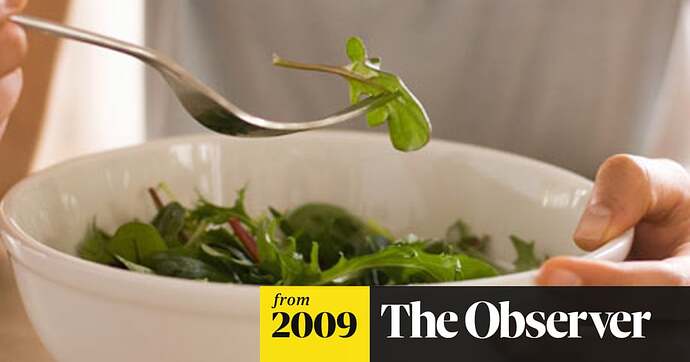 Wow the sheer stupidity of this article.

So we all have an eating problem…?

This shit is being overblown, yeah there are some people who are seriously OCD about the types of food they eat. But c,mon throwing every person with stringent eating habits into this category is laughable. Its the mainstream media trying to coax the average fat ass couch potato that they’re the healthiest person in the world because “they don’t obsess about what they eat”. Potato chips, fine, cake, fine, the entire chinese buffet, I’m not being picky, I’m being healthy!"

The government and the media at work, as usual. Pay no mind.

Omg good thing I don’t eat my M-F diet on the weekend too, or else I would be considered to have a disorder too!

Though I’m sure my co-workers think I DO have a disorder. lol

Well, my best friend’s daughter almost died from this according to her doctors. So it’s not a joke. It’s hard to understand if you don’t have the problem yourself, just like most eating disorders. You start to limit your intake of anything you think is “unhealthy” and then you end up only eating a head of organic cabbage for the day. You end up the same place anorexics do. It’s messed up and people die from it.

You guys just never interacted with the “clean” eating group that washed through here a few years ago.

There are some ridiculous motherfuckers out there. People with some off the wall ideation looking for proof that what they think is true, and when they find something that resembles what they want to believe, they are some of the most absurdly stubborn and neurotic nitwits you will ever see.

Those are the people that the article was talking about.

I think there needs to be an intervention episode with someone with this “disorder”.

Orthorexics commonly have rigid rules around eating. Refusing to touch sugar, salt, caffeine, alcohol, wheat, gluten, yeast, soya, corn and dairy foods is just the start of their diet restrictions. Any foods that have come into contact with pesticides, herbicides or contain artificial additives are also out.

Guys, they aren’t talking about normal healthy eaters. This article is about nut jobs. There is no reason to start a whole new disorder about it, those douchebags just have OCD.

Making sure you get the rights fats, eat enough protein and eating your vegetables does not make you an Orthorexic, although it might become the new ‘cool’ term to call people who don’t eat mcdonalds and pizza hut and shit on the regular.

I thought it was satirical until about halfway through the article. Unfortunately, people can take anything too far, including clean eating.

[quote]Fuzzyapple wrote:
I think there needs to be an intervention episode with someone with this “disorder”.

If eating healthy and being critical about what you eat is a disorder, is it covered by your medical insurance??? Stop and think about htis for a minute. We could be on to a gold mine. If you eat healthy, you might be entitled to a “disability” pension. This has some potential.

umm i think some people are a bit to defensive… it specifically talks about people who refuse to eat what they perceive as bad… even very healthy foods can be considered dirty and bad.

[quote]holguint123 wrote:
Fuzzyapple wrote:
I think there needs to be an intervention episode with someone with this “disorder”.

I was telling people I so would watch it if it ever became a show.

The article isn’t referring to us, it’s about people who are paranoid about organics, yeast, wheat, gluten, pesticides, etc.

Not about eating lean beef, lean chicken, brown rice, yams, and using flax seed in all your recipes.

Says the people aren’t concerned with quantity, only the “quality” of their food.