According to Harry Reid, the man leading the charge into a spending package (ie the servitude) that your great-grandchildren will be paying for, your taxes are voluntary. 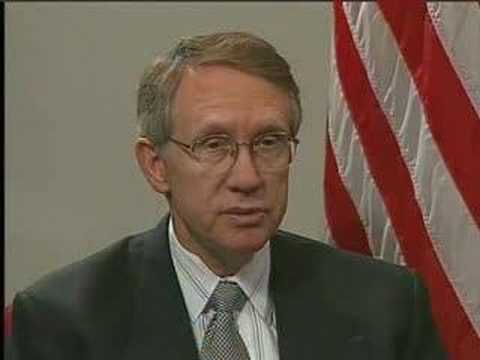 I love that guy. I think he’s the guy that interviewed Nancy on minimum wage.

Another good one is the interview with waxman in bigger stronger faster.

[quote]SteelyD wrote:
According to Harry Reid, the man leading the charge into a spending package (ie the servitude) that your great-grandchildren will be paying for, your taxes are voluntary.

He may be a moron, but I don’t believe that he actually believes it’s “voluntary”. I think he’s lying.

Q3: If the IRS determines that an employee does not have enough federal income tax withheld, what will an employer be asked to do?

Nothing about that seems voluntary.

I disagree: it’s not lying or being stupid, but Newspeak. A necessary component of leftism.

Maybe he was speaking about Obama’s cabinet?

I showed my wife the video and when she saw Geithner on TV this morning she piped up that it’s interesting that our Treasury Secretary had to be forced to ‘volunteer’ his taxes before he could head up the department that forcibly takes our ‘voluntary’ taxes.

I gave her a high five.[/quote]

C’mon. Just a hand-slapping, high five? Since when do you stop there?

vol·un·tary
[i]Function: adjective
Etymology: Middle English, from Anglo-French voluntarie, from Latin voluntarius, from voluntas will, from velle to will, wish ? more at will

1 : proceeding from the will or from one’s own choice or consent
2 : unconstrained by interference : self-determining
3 : done by design or intention : intentional
4 : of, relating to, subject to, or regulated by the will
5 : having power of free choice
6 : provided or supported by voluntary action
7 : acting or done of one’s own free will without valuable consideration or legal obligation[/i]

I think that the word “voluntary” as used by Harry Reid does not mean what I think it means.

Given that there is a political class who twist words to such an extent that by “income tax cuts” they mean sending checks to people who don’t pay any income taxes at all while continuing to demand just as much from those paying the great bulk of the taxes and sending them no such check, by “spending cuts” mean “a large increase but less so than previously planned,” by “Social Security Trust Fund” mean “money that we already spent for the general budget,” and by “economic stimulus” mean “largest increase in funding of government programs in history,” etc, why would anyone be surprised that one of these persons would twist the word “voluntary” as Reid did?

[quote]Bill Roberts wrote:
… why would anyone be surprised that one of these persons would twist the word “voluntary” as Reid did?[/quote]

I wish to test this theory.

I am not paying my taxes anymore. I am still going to file but instead I am filing a picture of my middle finger.

If we could get even 10% of the US population to do this Uncle Sam wouldn’t be able to do anything about it.

Besides, dear leaders have already shown us they do not need our tax dollars. They will just print the difference of their shortfall, anyway.