I know a lot of people liked the video since I posted it, but no comments yet so I’ll throw something out there.

I love Haney. Respect him a hell of a lot. Met him once and he was a gentleman in every sense and never has to apologize for anything he did as a bodybuilder or in his life.

In this video though, and I know it’s discussing Ronnie’s training approach, Lee seems to chalk up Ronnie’s use of heavy weights as the simple rationale for Ronnie’s immense size. Now Dorian was a beast in the gym, and any powerlifter of that era will tell you that he was damn strong, and used insane weights during his training. With nothing but respect for both Ronnie and Dorian, I can’t help but feel that the real change in going from Dorian to Ronnie’s reigns had more to do with the medicine cabinet than the weight room.

For sure but Ronnie was big way before he started competing. Definite genetic component. Dorian talks a lot about the drugs he used when he was competing and I bet they didn’t change a whole lot when Ronnie was competing. I bet it was just the amounts used. Also, not sure if Dorian ever said much about how he got his but Ronnie said he had a doctor prescribe them for him. So he had someone perfectly dialing in his chems.

Anyway still doesn’t take away from the work it takes to get there and the fact everyone else competing against him had the same.

I enjoyed the video, but I was a little surprised by Haney’s opinion, being that he came from the “stimulate, not annihilate” school of training. Ronnie was definitely from the annihilate school of training. I think Ronnie did everything he could, I don’t believe he could have trained harder without rupturing tendons. Dorian probably trained harder than Ronnie, as he ruptured his bicep, and badly tore a tricep.

Also, not sure if Dorian ever said much about how he got his but Ronnie said he had a doctor prescribe them for him. So he had someone perfectly dialing in his chems.

Maybe it was more the fact that he had someone keeping an eye on his blood work to make sure he didn’t kill himself with all of it? On top of telling him what he needs more or less of.

IMO, the difference comes mostly from genetics. Google Ronnie’s mom. Lady had crazy muscle in her 50s. I generally don’t believe much in regards to self reported steroid use by the pros.

I’m sure Ronnie had Drs prescribing him test and deca, but that’s probably it, and only in small amounts.

I don’t know why you would believe this. He was a cop, and they had a doctor arranged for all of the cops that were doing this. They had to be able to produce a script for whatever was in their locker if other Law Enforcement came throuh and looked - according to Ronnie. The only repercussion was forfeiture of the product if you didn’t have the script. Absolutely none of that story seems even remotely correct but ut us the standing claim.
First, who still has the script after getting it filled? Did he mean that they had to leave the box with the pharmacy sticker in their locker too? I don’t see what that proves, having a box doesn’t prove anything about how many bottles have been through that locker while that box sat there. If you really only risk forfeiture, and not charges for possession of a Category 3, how do I get in on that deal? I think he doesn’t even really know what he took or how much, and that combined with a genetic predisposition to being massive is pretty powerful. He’s on TRT now, and is nowhere near what he was, so he was on an awful lot more than TRT dose by the look of things.

He must have had a script…from about 10 different Dr’s , at the same time.

First, who still has the script after getting it filled?

I don’t know anything about the rest, but if you’re in a job that’s regularly drug tested, you know to keep the script.

but if you’re in a job that’s regularly drug tested, you know to keep the script.

I know to hand it to the pharmacist and never see it again in the old days. Now they don’t even give it to you to begin with, it just goes electronically to the pharmacy of your choice.

I can’t help but feel that the real change in going from Dorian to Ronnie’s reigns had more to do with the medicine cabinet than the weight room.

Ronnie could walk past a gym and add 5lbs of muscle but it definitely seems that he was gifted in his ability to tolerate PEDs as well.

No question Ronnie was gifted in the genetics dept, but yes, you’ll hear people with actual understanding of PED usage talk about hyper-responders, and how well some individuals can tolerate certain compounds. I’ve always held that the top pros in the sport would be at the top if no one was using gear. The end all be all, assuming everyone is training hard and focused on proper nutrition and recovery, is always going to be your genetics.

Look at Levrone, the guy won his first show that he wasn’t training for (he was competing in a powerlifting contest the same day and his friends talked him into jumping onstage). Ronnie looked like a bodybuilder when he was just playing college ball. Dorian hit the weights as a young teenager who did a stint in juvie-hall and had surprising results… I’m sure the list goes on. 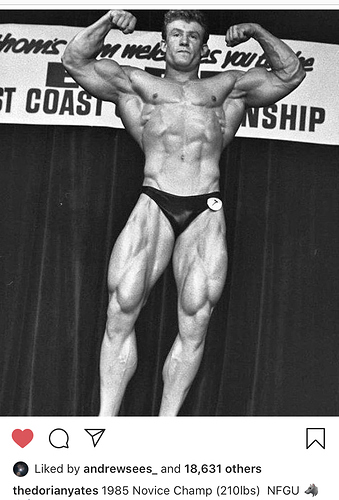 Look at how young Yates was in this pic (came up on my IG feed today)… who looks that solid and complete in their first amateur contest?

Ronnie looked bigger and more solid at his first amateur powerlifting contest. Not even a BBing contest.

What is even more impressive is the lifter after Ronnie. He hits 220 kg deadlift and looks to be in his 80s, and about 130 lbs. 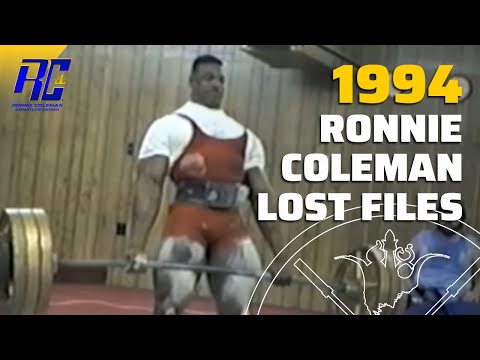 What is even more impressive is the lifter after Ronnie.

Look at Levrone, the guy won his first show that he wasn’t training for (he was competing in a powerlifting contest the same day and his friends talked him into jumping onstage)

This is so amazing, it’s difficult to comprehend. Forget winning–it’s astonishing enough to contemplate an unprepped individual just being able to look like they belong onstage. But actually winning? Talk about unicorn genetics…

So many of those guys from the 90s really were just amazingly genetic monsters. I’m not discounting what was going on in terms of chemical enhancement, but there’s a reason why people still compare what we’ve seen the last two decades in a less favorable light to what we saw during the 90s. 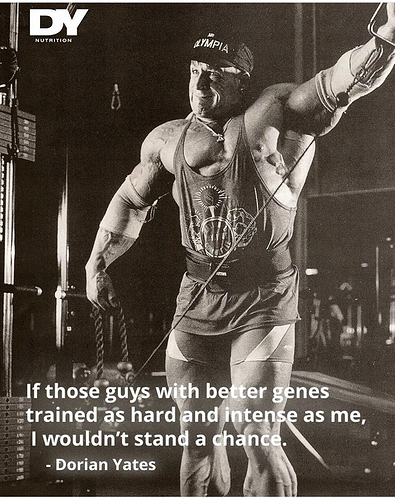 The 90’s was the Platinum Era.

2000’s until now everything went a bit mutant, so it would have to be the Uranium Era.

It really was A crazy era for bodybuilding. Shawn Ray was amazing but look at them next to Dorian. pretty sure this wasn’t even dorians best Olympia showing. 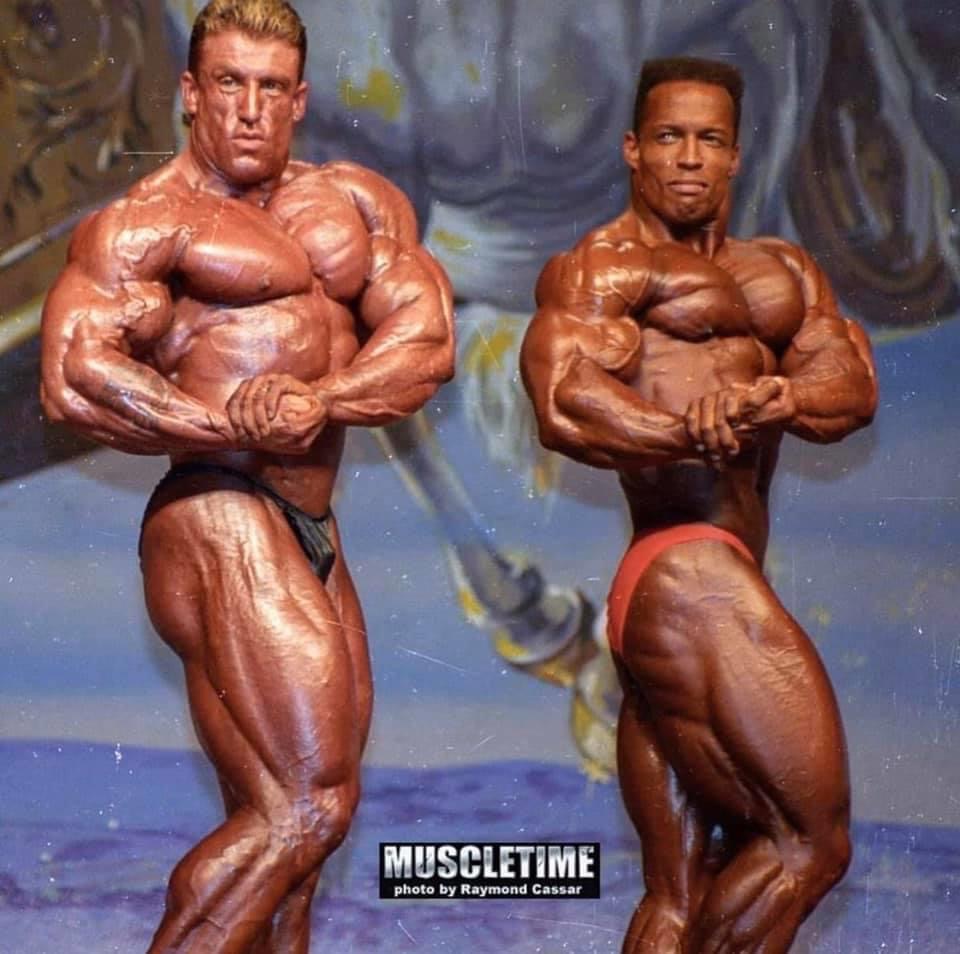 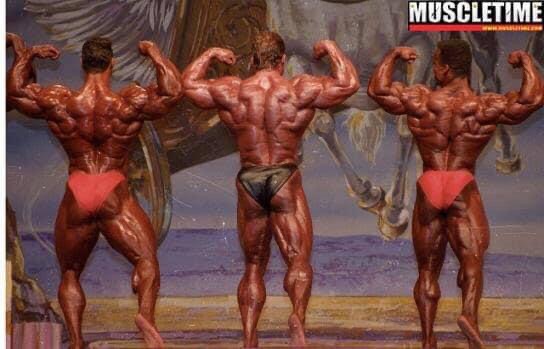