I was doing rack pulls last week, and proceeded to tear off a couple calluses on either hand. I almost had to cut the session short, but I tried to apply numerous band aids when doing the rest of my back exercises. I put neosporin on it since then, and yesterday, while deadlifting, they tore open again. I had even put a strand of duct tape over a band-aid to prevent this, but it didn’t work.

Does anyone have any remedies other then neosporin or anti-biotic creams for callused hands? Should I take the rest of this week off to let them heal? Or should I use gauze or tape and wrap up my hands? 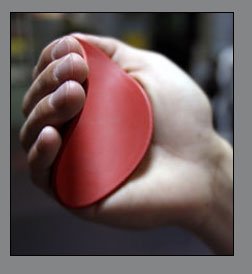 [quote]rsg wrote:
Let them heal, then consider something like this.[/quote]

Thanks for the reply. That was in an article several weeks ago, right? By Shugart?

I got them on a recommendation from Cressey over a year ago - Lynx grips are the shit since I can’t stand gloves.

Alrite, Thanks man! I really don’t want to use gloves at all, seems like a real waste of money for the ones that are available in my area.

Get your grip stronger. The stronger your grip is the less likely the bar will slip, which follows that it is less likely that you will tear a callous. Also, take care of them. If they stick an inch out of your hand then they are going to be more likely to rip. Buy some fine grain sand paper and touch them up from time to time.

I haven’t found anything better than using chalk for improving deadlifting grip. Moisture won’t be able to aggrevate the problem.

Seriously though, I have some insane callouses, but unless I’m consciously picking th 'em, they don’t tear off and bleed. I’ve bled doing deads before, but that’s about it. I hate to advise using gloves, because I’ve never felt comfortable with 'em myself.

Thanks for all the replies guys. I was using chalk when doing rack pulls and deadlifting, but I suppose I’ll lighten the load a bit and stop working with 90% or above for a couple weeks.

Pemdas, I do have some sand paper lying around, and I may give that filing idea a try.

Soaking in salt water will sure do the trick to toughen up your hide. Wash your hands with soap and water, then soak in salt water for a a couple minutes.

Then, after the shower, or maybe before you go to bed put on some lotion. The only manly hand lotion is Corn Husker’s Lotion.

best thing is to keep them as flat as you can. do not let them build up. this is best done while in the hot tub. keep picking/filing/cutting/sanding/ whatever-ing them down and they will eventually stop building into bumps and just be very flat and very tough…i think it was about 6 months till i stopped building bumps and stopped having to maintain them so much. chalk up. lots of chalk.

Those Lynx grips help me even more than gloves because they dont fold and pinch like gloves can do if they dont fit just perfect. The only problem I have is that my hands are pretty small so the increase in bar radius lowers my max strength when using them. Also if they collect a lot of dust/dirt then they lose their grippy-ness

A hot shower along with some fingernail scratching works for me

I found this website very helpful. I now remove my calluses once or twice a month.

[quote]mchron wrote:
Those Lynx grips help me even more than gloves because they dont fold and pinch like gloves can do if they dont fit just perfect. The only problem I have is that my hands are pretty small so the increase in bar radius lowers my max strength when using them. Also if they collect a lot of dust/dirt then they lose their grippy-ness[/quote]

Just wet them if they lose their grip.

As for increasing the bar radius, that’s a good thing. Thicker bar means more effort to hold it and that works your forearms more too.