Gross Injuries You've Had or Seen

I just wanted to know, what are some of the most aweful injuries you guys have seen in the gym or anywhere? On TV, heard about, or experianced.

My worst injury was a torn ACL playing hockey.

At the gym im seen a dude rip his quad off the tendon and it rolled up his leg.

The worst injury i saw on TV was the sid vicious leg break in WCW, and the Joe Namith leg break.

The worst one i saw on the internet was a pic of a dude doing a squat, and he ripped his pants and his bowels came out through his ass. true story. If u guys can find the pic, post it. its gross.

I’ve been looking for that pic of the dude who squatting his intestines out his ass. Never did find it though.

I saw a dumbass overload a leg press machine, and it crushed his dumb ass. His hips popped out of joint. It wasn’t exactly the sight, but the sound that was awful.

I saw a guy take off all the weight on one side of a preacher curl station, and the unweighted side swung up and hit him in the mouth. He spat out two teeth. (The prongs holding the weight were very narrow.)

I drank drano once(some dumb ass put it in a wiskey bottle), and barfed my esophagus into the toilet. Also did some serious upper respiratory damage. One week in the I.C.U., another in regular care. Couldn’t eat for 2 weeks in hospital, got back on solid food in about 3, but it took 6 months for my taste buds to return.

Gross enough for ya?

One guy that witnessed it still turns white as a ghost when he sees me- 13 years later.

that pic is on one of those sites that have gross pics. like disfuctionjuction.com or something like that.

I was playing a football (soccer) match for my local team. I wasnt wearing any shinpads and got slid out, i broke my leg, (Shin bone)It wasnt a major break but was my worst ever injury. Ive broken all my fingers and one thumb aswell.

[quote]dankgreene wrote:
I saw a guy take off all the weight on one side of a preacher curl station, and the unweighted side swung up and hit him in the mouth. He spat out two teeth. (The prongs holding the weight were very narrow.)
[/quote]

I’ve a variation of this. An EZ bar was across a bench when the guy unloaded one side. The other end caught him in the face and split his forehead right open.

The worst injury I’ve seen on TV was the Willis Mcgahee leg break in the national championship a few years ago.

Torn patellar tendon. I went to emergency and the doctor reduced it, thinking it was only dislocated patella. I walked around for a week in a Zimmer splint. I figured something was wrong when I went to physio and couldn’t lift my heel of the table. Surgery 2 days later. Once in, the surgeon found that I had also torn my joint capsule. A year later, and I’ve got full rom, pain free and about 90% of my strength back. I’m still struggling with getting the mass back though.

I had a severe softball injury. I took a line drive in the mouth, lost my fron teeth and half a dozen surgeries.

Eventually they had to carve bone off my hip and screwed it onto my upper jaw. After that healed and fused I had some bone for titanium implants. The process was over 2 years. My upper mouth had shattered bone and would not hold any screws, hence the bone graft.

The worst one i saw on the internet was a pic of a dude doing a squat, and he ripped his pants and his bowels came out through his ass. true story. If u guys can find the pic, post it. its gross.[/quote]

Do you mean this? 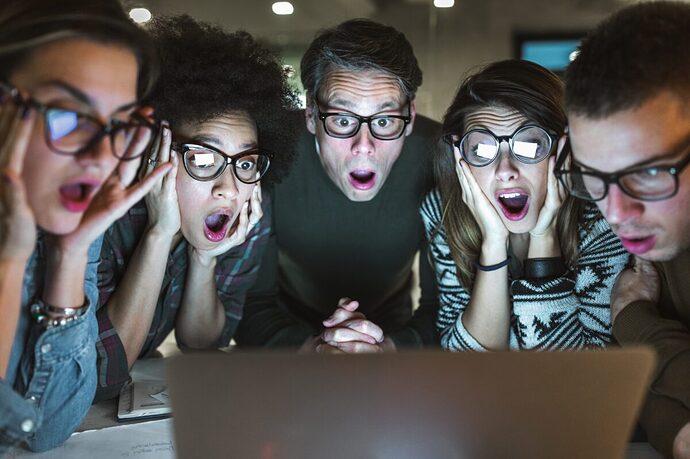 Is this Weightlifter with a Prolapsed Rectum Real?

This fact check is not safe for anywhere.

I saw a junior high school kid on the monkey bars lose his grip and come down on the ground bracing with his hands. Compound fractures of both lower arms. Didn’t know what bone, ulna or radius, was sticking out. Hardly bled at all. His lower arms were flapping all over the place.

While a college student in Boston, I saw a guy who had been murdered in his car. His entire head was blown all over the windshield. Shotgun blast from the backseat what the cops told me. Looked a lot like Marvin in Pulp Fiction but in the front seat and a lot more blood and brain all over the place. I was standing there only about a minute before the cops draped the entire car in a tarp.

[quote]Z2nd_Comng wrote:
The worst injury I’ve seen on TV was the Willis Mcgahee leg break in the national championship a few years ago.

reminds me of this:

Now THAT is a leg check. Someone get the white dude some milk.

Most disturbing thing I saw was a hockey clip on ESPN from an NHL game where a goalie got his neck sliced by a players skate. There was a puddle of blood on the ice that made me gag when I saw it. I thought I was watching a man die on TV

In a span of 3 1/2 years, Acl rebuild, miniscus scoped twice, then a shattered right ankle, then shattered both legs and almost lost my left leg, but I received a nice external fixator and scars that Frankenstien would be jealous about, then I rehabed and 8 months down the road shattered the right again and bent all the hardware inside my left and right, breaking 8 screws out of the right leg inside plate, bending the outside plate, and bending screws in the left leg. The 2 shattered legs put me in a bed for 2months in my living room, then in a wheel chair for 3 months and on to crutches for another few months.

Of course the legs/ankles will never be the same, but I am still in great shape, running 3 times a week and doing full resistance training that include Olympic movements. It has taken alot of personal motivation to get back, but I still plan on making progess through the years and being in the best shape of my life day after day…

I saw this when I was in high school at a wrestling tourney. Some dude broke his ankle; I didn’t see the break but I saw his waiting for the ambulance. He was on his back, his leg was straight and his knee was pointed to the ceiling, but the outside of his foot was flat on the ground. Nasty to see.

I had the McGahee injury in '93 - tore my knee to shreds in a football game on an illegal block. Unfortunately, my local small town doctors told me it was a sprain, and although I had to sit out the rest of the football season, told me I’d be OK for basketball.

About 35 minutes into our first practice of the year, while diagraming a fastbreak drill with the entire Varsity watching, I did a jumpstop - my knee bent about 90 degrees sideways, then I fell forward on it, hyperextending it.

Two of my teammates puked on the endline.

Torn ACL and MCL - 90% of my meniscus was shredded from the bones.

Doing squats is still a bitch, and I’ve got to go and get my knee scoped again this spring.

I freaked out when I saw McGahee’s knee get destroyed.

I also saw a kid on the JV get his forearm broke after getting hit right on our sideline - you could hear it crunch, and when he got up, his arm from the middle of the forearm down was just hanging crooked - that was pretty sick.

Bone injuries are sometimes the most shocking, because you can get good pictures, but joint injuries really make my stomach turn.

[quote]SkyzykS wrote:
I drank drano once(some dumb ass put it in a wiskey bottle), and barfed my esophagus into the toilet. Also did some serious upper respiratory damage. One week in the I.C.U., another in regular care. Couldn’t eat for 2 weeks in hospital, got back on solid food in about 3, but it took 6 months for my taste buds to return.

Gross enough for ya?

One guy that witnessed it still turns white as a ghost when he sees me- 13 years later.
[/quote]

Did you beat the fuck out of him for almost killing you?

My worst was when I was 8 years old, and my dad was rebuilding the kitchen. I stood up on a chair to reach something in the cabinet, and when I stepped back down, I stepped on a 2x4 with a nail sticking up. Went completely thru my foot. It was nice. 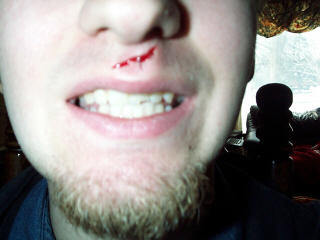 Lets see…
Franco’s leg injury in the world strongman contest still makes me queezy.
I managed to turn my foot around completely backwards while running an obstacle course and slipping on wet grass. lots of shredded ligaments and bone(s).

Saw a guy who had comitted suicide by sitting on the edge of his bed and taking a 12 ga. shotgun, placing it in his mouth and pulling the trigger,

He fell towards the doorway and the open skull and brains were everywhere. His ball cap with its split bill, had flipped up and was on a celing fan blade, that was slowly turnung.
Watched a guy (2 feet away) with a .38 revolver at his temple, squeeze the trigger, shooting himself through his head. He spun, fell face first to the flooe and bled out.
Lots more stories…

I got highsticked by my little brother when I was maybe 7 and we were playing street hockey without helmets…the end of his stick cut my eyelid in half (fortunately it missed my eyeball) and hit the side of my nose, which shook my head enough to detach my retina. After a bunch of stitches and some sort of light or laser thing being shone into my eye I was fine.