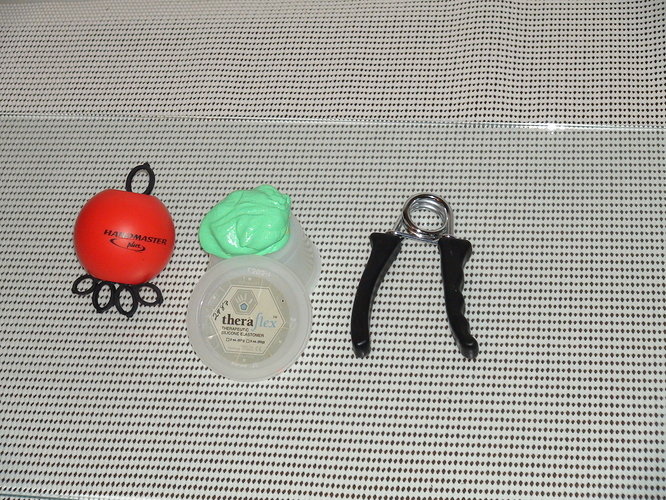 1600×1200 744 KB
My grip strength is starting to fail on my deadlift so I’m back to grip strength training. Here are my opinions on products I use/have used:

None of that is going to do diddly squat for your deadlift grip.

Double-overhand rack lockouts with a timed hold work. Go as heavy as you can for a ten second hold.

One-handed DL’s work. Especially with varied handle diameters. Again, as heavy as you can, but no pause necessary.

Get some real grippers. But then, past a certain level, they don’t carry over to supportive strength much.

[quote]JayPierce wrote:
None of that is going to do diddly squat for your deadlift grip.

Double-overhand rack lockouts with a timed hold work. Go as heavy as you can for a ten second hold.

One-handed DL’s work. Especially with varied handle diameters. Again, as heavy as you can, but no pause necessary.

Get some real grippers. But then, past a certain level, they don’t carry over to supportive strength much.[/quote]

Thanks for the advice. Is this because supportive strength involves slow twitch muscle training and crush grip involves fast twitch?

BTW - I have been training grip strength for a number of reasons including injury rahab. I’ve just started to find my grip failing in my left hand due to former injury. I just went back to the grip strength training I’d been doing previously. Looks like I’m not doing the right type for keeping hold of a barbell.

Get some chalk. You won’t have to worry about this ever again.

I’ve never had any trouble with grip strength, nor am I putting up much weight at all, so take my advice with a major grain of salt. I like to go double overhand as long as I can in my deadlift ramp up. I do shrugs double overhand, too.

I found that doing regular gripping the day before deadlifts with a run of the mill grip strength thingy helps my grip in deadlifts. Like it primes my hands to be ready for the effort the next day. I’m not sure how effective others would find this, my muscles seem to get lazy pretty quickly, so warming this up like this helps me quite a bit.

[quote]HaveIronWillLift wrote:
Thanks for the advice. Is this because supportive strength involves slow twitch muscle training and crush grip involves fast twitch?[/quote]
It may have something to do with that, I’m not sure. A lot of grip guys will tell you (me included) that after a certain point (right around a CoC #3), improving other aspects of your grip will improve your gripper strength, but not the other way around. May have something to do with your body’s built-in injury prevention mechanisms.

[quote]BTW - I have been training grip strength for a number of reasons including injury rahab. I’ve just started to find my grip failing in my left hand due to former injury. I just went back to the grip strength training I’d been doing previously. Looks like I’m not doing the right type for keeping hold of a barbell.

Also, I’ve read that I should have the barbell hanging in my fingers as opposed to my fingers wrapped around the barbell and the barbell in my palm: ‘claw not paw’. Is this right? Holding the barbell like that causes my grip to fail in my left hand.[/quote]
Some people grip better with a closed fist. If you have the strength to hold it with a claw grip, definitely use it for DL’s. Decreases your range of motion by about an inch.

From Thibs’ random thought of the day thread:

GRIP PROBLEM? HELP FROM THE STRONGEST ‘GRIP-MAN’ OF ALL TIME!

I have smallish hands, it has always hurt my lifting performance in the past, mostly because I did not try to correct the situation by working on my grip strength.

For example, when I was competing in olympic lifting I could snatch 142.5kg in training (actually have that on video) yet my best in competition was only 125kg (around a 40lbs difference). The main reason was that I often relied on straps during training. The ‘more secure’ grip allowed me to transfer more force the the bar which led to ‘better’ performances in training, but bad ones when it counted.

I didn’t help myself in that I never worked on my grip strength and used straps for all pulls and deadlifts.

I started training on the olympic lifts again, and still train the deadlift hard (my nemesis; which I want to conquer). This time around I decided to throw away my straps completely and work on my grip strength to solve that problem once and for all.

I did the typical grip stuff: Captain of Crush grippers, pinch gripping, bar holds, forearm work, etc. My hands got stronger, on those lifts, but it didn’t seem to transfer 100% to the actual performance of snatches, cleans and deadlifts.

So I looked elsewhere, to one of the strongest grip-man (if not THE strongest) of all tine: Hermann Goerner. That man has too many grip-strength feats to number them, but suffice to say that he has deadlifted over 750lbs with ONE HAND. This requires a grip of steal!

How did he train his grip strength? He would ramp up the weight on his deadlifts (and one-hand deadlifts)… with the lighter loads he would use a tougher grip and as the weight were getting heavier and heavier he would switch to a stronger and stronger grip type.

For example, he might start his deadlifts by using a supinated (palms forward) grip, using only two fingers per hand. He would ramp up the weight…

When three fingers were not enough he would use a full, supinated grip (using the 4 fingers and the thumb wrapped around the bar) then a full pronated grip…

When the full pronated grip was starting to be tough he finally switched to an alternating grip.

This progression is a bit long for myself, as I’m not a grip-master yet, so I adapted it. It looks like that:

I ramp up the weight on all sets. I use this method for deadlifts and shrugs (which I now use as my main grip exercise).

I find that this…

Goerner is not the only one to recommend such technique. At least two other respected authorities recommended a somewhat similar approach.

Years ago Tommy Kono (former world champion olympic lifter) recommended that those who have a weak grip do their olympic lifts with a regular full grip instead of the typical hook grip (which is more securem but doesn’t improve grip strength) on snatches and clean until the weight on those lifts absolutely require the use of a hook grip. Over time this makes the grip much stronger.

Charles Poliquin also recommends the same when he works with female olympic lifters. In OL the women lifts on a smaller bar, less thick (25mm instead of 28mm). Charles recommends that the female lifters use the men’s bar for as long as they can, and switch to the women’s bar when the weight gets heavy. He noticed an actual increase in pulling strength as soon as you switch bar (better neural activation).

He recommended something similar on rowing movements… guys can use a thick bar for the lighter work sets and switch to a regular sized bar as the weight gets heavier.[/quote]

There are some guys on this site who can deadlift in the 500s easily but can’t close the CoC2 gripper. Crushing grip and supportive grip are different things.

Kroc rows without straps are good for grip too. Hands turn into strong claws. 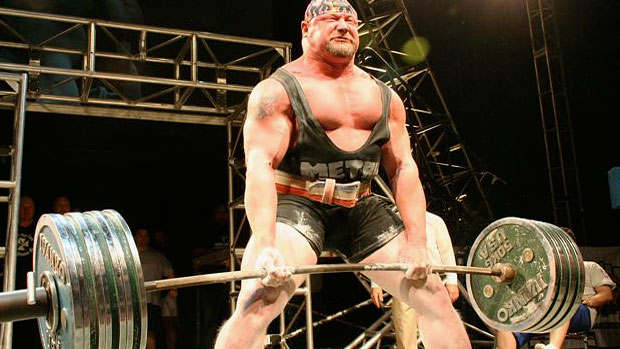 Grip Training for the Deadlift

Andy Bolton, he of the 1008-pound deadlift, reveals how he built up his grip for the deadlifting task at hand.

This was a great article.

Looks like another ‘I’ve done your research for you thread’. Thanks guys.

i found the best wsay to improve my grip is just doing movements that require you to grip heavy weights. I built mine with deadlift, RDL’s (these are really challenging when you are doing higher reps), pull-up variations, One Arm Dumbbell rows, and some farmer’s walks.

I haven’t done any specific grip training and still it is strong enough where i never have to wrry about it being a limiting factor in any lifts. You want to teach your body to learn how to hold onto heavy weights while completing challenging movements. Just flexing the muscles involved with grip I don’t think has the same strength carryover to compound lifts. You might get bigger flexors and extensors but not a bigger deadlift etc. IMO