A GREAT take on how the joker was created, I actually prefer this to the “failed comedian, accidental criminal” arc.

This truly makes him formidable adversary for the dark knight imo.

check out the story line: 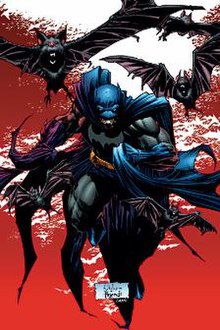 Batman Confidential is an American monthly comic book series from DC Comics which debuted on December 6, 2006 and concluded on March 2, 2011. Like a previous Batman series, Batman: Legends of the Dark Knight, Batman Confidential featured stories by rotating creative teams set in the early years of modern Batman’s career, post-Batman: Year One, and illustrated formative moments in the character’s past, such as first encounters with allies and foes. The first story arc by Andy Diggle and Whilce P...

I like the failed comedian guy down on his luck origin, having just one bad day. The great thing about what was done with Killing Joke was all of the Joker’s origins where incorporated into it

Killing Joke/Every Other Joker Origin Ever: “I had the worst day ever. I was threatened by some gangsters, my pregnant wife was killed, I dressed up in a tux and a red hood, got knocked into some acid, went absolutely insane. Hello, Commissioner. How’s the kid? Tee-hee.”

L & MM sucked. Where’s the Red Hood aspect of the origin? Where’s the precursor to the torture of Gordon (the idea that One Bad Day can drive anyone over)? Where’s the tragedy?

I accept it as canon as I do everything from Warhammer 40,000 - it’s all true, even when it conflicts with itself. The Joker’s origin is uncertain because he remembers it differently from time to time. I feel, this time, he forgot about the hood.

[quote]Xen Nova wrote:
A GREAT take on how the joker was created, I actually prefer this to the “failed comedian, accidental criminal” arc.

This truly makes him formidable adversary for the dark knight imo.

check out the story line:

I have mixed feelings about those origins series. The geek side of me loves them, but the literary side knows that characters like batman are far more interesting when they have their secrets.

I didn’t like batman begins as much as most people did because it revealed too much of his background. A few flash backs would have been cool, start the backstory with him in Chinese prison, but don’t show how he got in there. Show some of his training with the brotherhood, but don’t lay out their story so neatly.

I don’t know, I’m sure I’m in the minority here. Most people don’t want to have to imagine anything, but just want it all laid out neat for them.

imo, the L&MM makes more sense for how the joker is his archnemesis. Being a failed comedian, a shitty criminal, accidentally falling into acid doesnt make you a badass super criminal capable of rivaling the greatest non meta human super hero on the planet.

the L&MM story explains jokers developing insanity, batmans role in it, how he was pushed over the edge, his obsession with batman, their duality, why (even after crippling commish’s daughter, killing his wife, killing jason todd, etc) he can’t approach that edge and just finish the fucker off. The guy was going to off himself. Batman’s very existence unleashed a monster. Hell the story line shows a maturation process of batman. It even shows how the two characters are related in that batman is also (really) ‘insane’ in his quest, just as the joker is in his.

it really makes the joker EVIL not just a gag villian. It makes the situation hopeless, not funny.

i agree from a literary sense origin series makes too much cut and dry which leaves less wiggle room in the future for authors because they have to abide by principles set by the origin series if they’re accepted as canon.