Got My Free Metabolic Drive Bars

I got the chocolate chunk ones. First time I ever had them. Pretty fuckin good too! Thanks

Chocolate Chunk rules! Problem is, I’ve turned too many of my friends onto them and they keep taking mine.

I’m more protective of them now. They just going to have to get their own any more. Besides, I’m eating the shit out of them too and they just don’t last at that pace.

Love the get a free box. I ordered my usual 4 and get 5. Me likey too much!

Just placed my order, and it was the first time to have my credit card info saved.

I think this special should be run again when Anaconda comes out.

Not as long as credit cards and internet stores still exist. It is way too damn easy. I’ve been a member of this site only a month or so and I’ve already spent over $500 on stuff here. In my defense I did do the V-diet, which takes a lot of Metabolic Drive and HOT-ROX.

[quote]jsbrook wrote:
I think this special should be run again when Anaconda comes out.[/quote]

[quote]machine514 wrote:
jsbrook wrote:
I think this special should be run again when Anaconda comes out.

A new supplement T-Nation is coming out with that is supposedly going to rival the banned prohormones.

Got mine as well.
AMAZING!

Even though I already ordered and got a free box, im tempted to do it again to get the other flavor. I just ran out of my other 2 boxes so this would be a free refill of sorts.

I’ll let others in on the action though.

Got mine Friday. The chocolate chunk is frickin’ amazing.

Damn, I’m still pissed that I ordered a day before this offer. I might have to put in an order. Anyone know when this offer expires?

I have to admit, the chocolate chunk is much better than the pb version. I’m pissed that I’m dieting right now, I can’t even eat em! Good job T-Nation and Biotest.

Got mine too! My filedrawer at work now has 2 tubs of metabolic drive and 3 boxes of the bars. It makes me happy just thinking about it.

Fortunately for me, the one person who would steal them from me is SEVERELY allergic to nuts and the trace of almond butter in the chocolate chunk is enough to deter him, buahaha!

What’s the difference between the Metabolic Drive bars and the Grow! bars? I seem to recall some posts months ago saying there were texture and macronutrient differences.

[quote]nephorm wrote:
What’s the difference between the Metabolic Drive bars and the Grow! bars? I seem to recall some posts months ago saying there were texture and macronutrient differences.[/quote]

The peanut butter bars are the same. Any texture and macronutrient differences were imagined. The chocolate chunk is a new formula; unfortunately I do not remember the difference between the Grow! and Metabolic Drive versions.

I got me hands on a couple of bars last week. I must say, I’m impressed. Could this be the best tasting protein bar ever?

All the hype and advertising doesn’t do much for me until I’ve tried it, and so far Biotest has been good to me.

Ok, just got mine today.

agreed. Very clever marketing idea for Biotest actually, as I’ve never been a protein bar fan and would never have bought a box on my own… But a free one was too good to pass up, and now that I’ve tried em I think I’m hooked. I will purchase more in the future. Damn it.

I’d eaten many Grow! bars, but then let the habit lapse. I just got the free Metabolic Drive bars 2 nights ago; placed an extra order just for the deal with 2 tubs Low-Carb Metabolic Drive powder, 1 Surge, 1 Power Drive, 2 ZMA. When I picked up the box from my porch, I couldn’t believe how heavy it was. That little “brick” of bars packs a lot of weight into a small package!

And now I have to say yes, the Chocolate Chunk is amazing, and I’m sold on always having some around! 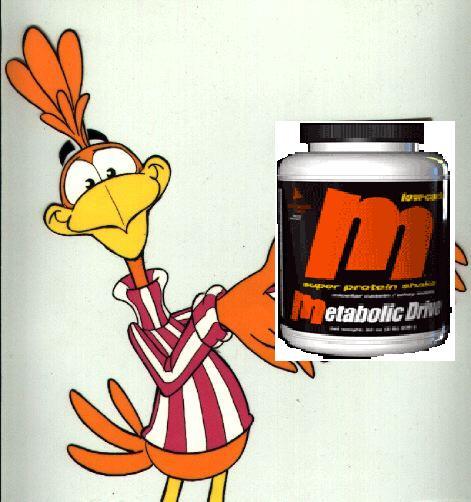 I got my first shipment of Biotest supps as a member, getting Metabolic Drive, Surge, Power Drive, and two Grow!. The free bars were awesome, had my first one this morning after playing hockey… and the chocolate Metabolic Drive is like liquid cocoa puffs!