Anyone care to shed some light on this? in the video of ronnie coleman front squatting 585 his hands are crossed at the chest and same for jay cutler in this video 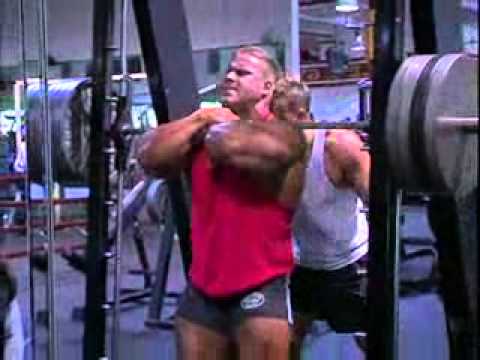 is this any better or worse then the wrist snappy way other do it? my wrist are the farthest thing from flexible so its a little hard for me to do it that way

Some lifters swear by California grip (better known as cross grip). Personally, I can’t balance the weight at all like that and feel much stronger with a clean grip.

[quote]amayakyrol wrote:
Some lifters swear by California grip (better known as cross grip). Personally, I can’t balance the weight at all like that and feel much stronger with a clean grip. [/quote]

I feel the exact same way. I’m way weaker cross armed. At least a 10% drop in weight. But hey, it seems to work for this dude

As mentioned, you don’t need the flexibility of clean grip but you sacrifice weight. Use straps.

The last time this topic was brought up I am pretty sure it ended with a valuable member never returning.

I wonder if some of these really big cats like Cutler and Coleman go cross handed because because they are so big that they can’t get into a proper position to use a clean grip. In all of the pics I have seen of Arnold front squatting he uses a cross hand grip as well. Wonder if sheer size is the reason.

Might wanna try to try the Straps on the Bar method. I have used it for over a year now and even talked Sam Byrd into trying it and we both like it alot.

The clean grip by far the best way to get the most weight and works your upper back a lot harder. What I did to get to a point that I could do them was use straps on the bar and stretch my forearm by pressing my palm against a wall (at arms length) with my fingers toward the floor and gradually as you can get your palm flat work further up the wall. This will get you able to do the clean grip. Then just suck it up cause its uncomfortable anyway.

[quote]OldOgre wrote:
I wonder if some of these really big cats like Cutler and Coleman go cross handed because because they are so big that they can’t get into a proper position to use a clean grip. In all of the pics I have seen of Arnold front squatting he uses a cross hand grip as well. Wonder if sheer size is the reason.[/quote]

lol like biceps stopping the forearms to bend anymore? must be the same in the sense of them not being able to wipe from the back. lol

I used the clean-grip for awhile because the cross-grip always felt unbalanced. But then a while later I switched to cross-grip and my front squat went up a lot because I didn’t fall forward as much. For me what made a world of difference was doing my best to keep my shoulders as wide as possible instead of protracting them really far forward (which just means less width for the bar to rest on and therefore less balanced). 300+ front squat at ~180, by the way, so I’m not a complete FS noob.

I used to do the cross arm but switched to this:

Its works pretty damn good. Try it the next time you train.

Jay there is in a smith machine, that’s a very different lift.

I’d suspect that with Mr Olympia sized shoulders it’s probably easier to create a pocket for the bar to rest in. I used to cross, but now that I’ve worked up to clean grip, I’ll never go back.

As others have stated, I also find a cross grip to be less balanced.

If you have bad wrist flexibility then try a clean grip where you have your hands out further, but still with a good stretch on your wrist. Then work your way in over time to a standard clean grip.

Just to add to the already positive feedback above, when using the clean grip if you don’t initially have the flexibility, you can also just keep 1 finger, 2 fingers, or 3 fingers on the bar.

I hit a 1RM with just 2 fingers on the bar. You don’t need to “grip” the bar, just a light touch to keep it balanced through the squatting. Do the stretches and you’ll eventually get it, I had to do them at least a couple times a day at first.

Also, the crossed arms grip puts you in a predisposition for kyphosis while squatting, since your shoulders are already rolled forward, which can cause you to dump the bar or just simply use less weight. The clean grip puts you at a much more advantageous position. Personally my front delts are “bigger” (I guess because they get rolled up, instead of into my chest) using the clean grip and the bar is more comfortable at heavier weights (off my collar bone and not cutting off my air). I guess if my shoulders were like Jay Cutlers I wouldn’t have that problem though lol