Hmm…I read that you’re not supposed to foam roll your lower back. I’m not sure, though. Perhaps you could do some research on the subject?

Well I’ll honestly say I didn’t know what I should and shouldn’t roll, I just went with what felt OK. I’ve googled it and there seems to be a lot of conflicting advice - some say not to because there is very little protective musculature, others say go ahead. Do you have an opinion on the subject? I’ll be the first to admit I don’t fully know what I’m doing with the roller.

I found this quote which makes a lot of sense:

“The literature that I’ve seen states that foam rolling in the low back (aka lumbar spine area) is contraindicative. This is due to the natural curvature of the lumbar spine which is described as a lordosis. Your cervical spine, or neck region also has a lordotic curve. You can feel how in both these areas, the bones naturally go into the body, as opposed to the thoracic region or mid-back (which has a kyphotic curve). As you’ve stated, the foam roller is great at hitting large muscles groups, like the quads, hamstrings, adductors, etc. But that type of force that is introduced into the spine is not specific enough to target the erector spinae and transversospinalis muslce groups without putting excessive force into the lumbar spine and all the surrounding ligamentous and nervous tissue. Basically you’re pushing something that’s already going forward even further. You can even do damage if you have a pre-existing condition like a disc protrusion or an anterior spondylolithesis (anterior vertebral body slippage) in the lumbar spine. Instead of foam rolling, you could get something smaller like a baseball or tennis ball and perform the procedure standing up against a wall. This would be more specific to the smaller muscle groups and friendlier to the spine. Foam rolling in the mid-back or thoracic spine is not contraindicative due to it’s natural curve as mentioned above. I’m not a licensed doctor so as always, consult yours before performing any soft tissue regimen.”

Think I’ll be using a tennis ball! Cheers for the heads up.

No problem. I personally don’t foam roll, so no, I don’t have much of a say in it.

Press up challenge - 54 press ups in 60 secs (Couldn’t avoid this, it got pounced on me when I came in lol)

Lots of stretching until I could sit in A2G squat

Shoulder is feeling better now so I decided to try weighted dips and see if they ache tomorrow. If they do then I may have to find an alternative

Especially as I really like them and it’s totally badass to go heavy on them. I plan to start my program again this Sunday.

1 min bike to warm up

Used chalk today to help my grip but it was completely finished by the end of this.

The injury is exactly opposite the muscle I strained at tug of war - I think that it’s much weaker and so the muscle I pulled today was overcompensating. I also didn’t warm up anywhere near as much as I usually do - I just rushed through and consequently, I fucked up. So pissed off with myself.

Back isn’t as bad as I had feared - just a slight pull I think, so I was able to lift for 40 mins or so.

1 min on bike to warm up

My back flared up again during my leg press warm ups and my first work set didn’t budge. Back got really painful so I called it quits. It seemed good enough to lift on this morning but the pain I’m in now suggests otherwise. FUCK why don’t I learn and just give my injuries time to heal?

Hopefully getting a power rack, barbell, weights and a bench for Christmas - I’m probably paying for half of it. I can’t wait to be able to squat literally whenever I feel like it. Psyched for a home gym!! My own music, all the fucking chalk I want - I’m so excited already lol.

Rack will be one of these two: 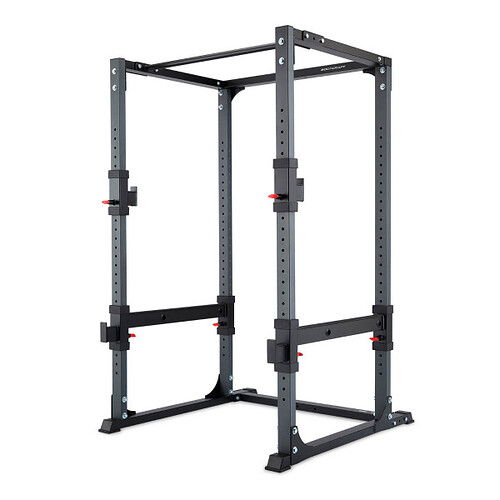 The BodyCraft Power Rack is built for the person who knows how to push their body to the limit. EASILY ADJUSTABLE With a rugged construction and easy 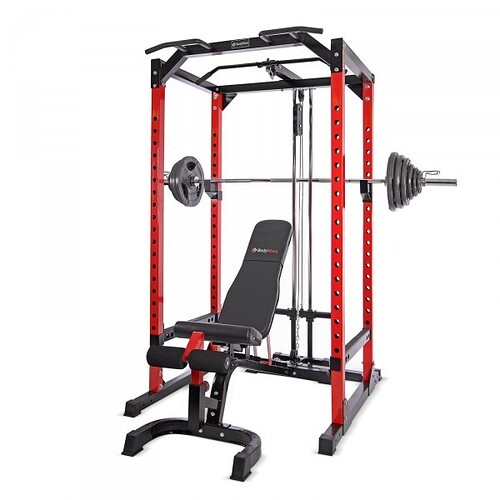 Which? I’m leaning towards the F430 - reviews seem very positive around the net.

Never realised how pricey plates were though. I’ll try to pick up some beaten up old 20kgs - it doesn’t matter what condition they’re in, the chrome doesn’t get you strong!! But seriously, it looks like just trying to get ahold of approx 200kgs in various plates will cost me around Â£200 :(.

Bar-wise, I’m looking at this:
http://www.powerhouse-fitness.co.uk/powerhouse-7-foot-chrome-olympic-barbell-1500lb.php
Now I know that the ‘1500lb’ test is completely misleading and an arbitrary and meaningless figure, but for the price does it seem a decent bar? I’m really not keen on buying twice, but at the same time I’m still in school and don’t have Â£500 to throw at a bar.

Bench - Going to get one to stick in the power rack. Not sure whether it should be flat or adjustible (again bear in mind that I have a very limited budget - about Â£400 of my own money in it’s entirely lol, and the Christmas present which is likely to be just the rack). Any suggestions?

Bear in mind that I’m in the UK - otherwise I would go straight to EliteFTS lol.

Geez. Even if I had the money, I wouldn’t have anywhere to train at my house. FML.

That looks like some quality equipment right there, though. All you really need is a rack, bar, bench and weights. Good luck!

Back is still being a little bitch, pressing is the only thing I can do without pain ATM so instead of completely stopping training I’ll keep going with my pressing.

Had a massage today to try and sort out my back. Feels better but as always, got to give these things time.
I will try to bench and weighted chin tomorrow, and then test squatting on the 23rd.

I have started 5/3/1 and I have some goals for the new year.

I’ve made a spreadsheet on Numbers to track my progress.

1 arm DB press
20kg 1x10
18kg 4x6 - Shoulders get pretty tired quickly from high-rep stuff. Also, my left shoulder seems to be significantly weaker than my right, which was noticeable in this exercise.

Lots of DOMS in my chest, lats (oddly) and a bit in my hams from the sprints.

BACK IS STILL ANNOYING

I’m considering trying deadlifts with a sumo stance (or at least trying to learn them) so there’s less strain on my back. I’ll hopefully give light ones a try in the next couple of weeks.

SEVERE DOMS from the squats. Haven’t had it this bad for a long time.