By Andrea Cohen and Mike Baldwin
The Oklahoman
STILLWATER - Oklahoma State sophomore receiver Artrell Woods sustained what is believed to be a serious back injury during a voluntary weightlifting session Friday morning.

The injury, which several sources said is not life-threatening but could be career-ending, is believed to be a fractured vertebrae. Sources said Woods underwent extensive surgery that lasted several hours, but they did not know the outcome of the surgery.

Woods was doing a standard step-up lift with about 100 pounds of weight on his shoulders.

Sources said it was a “freak accident” during a drill designed to build leg strength. According to sources, Woods lost his footing, went forward and hit his knees on the step, then fell backward. It is a lift that is not done with a spotter.

Woods was taken out of the weight room on a stretcher and treated at Stillwater Medical Center before being flown to Mercy Hospital in Oklahoma City.

Strength and conditioning coach Rob Glass was present at the workout but declined comment. The majority of the football staff, including coach Mike Gundy, are on vacation this week and will return to work Monday.

OSU assistant athletic director for media relations Kevin Klintworth confirmed Woods was undergoing treatment and evaluation in Oklahoma City, but would not address rumors that Woods has already undergone surgery.

Klintworth said more will be known about Woods’ condition over the weekend.

Unrelated to the Woods brothers from Millwood, Artrell Woods is a 6-foot-1, 200-pound sophomore from Bryan, Texas, who arguably was the offensive MVP of this spring’s Orange-White game.

After hauling in four catches for 111 yards and two touchdowns in the spring game, Woods was considered the leading contender for the No. 2 receiver spot opposite All-Big 12 receiver Adarius Bowman.

Really, really bad luck. Anyone familiar with back injuries? I just want to know that this guy can lead a normal life again. That said, it really sucks that he was hurt like this. He was a up-and-coming superstar. Very, very highly recruited out of high school, he was a Ted Ginn-clone in build and speed, although his open-field moves weren’t as good as Ginn’s. He was a 10.1 100-meters guy- no one could cover him one-on-one when he went deep.

Really, really bad luck. Anyone familiar with back injuries? I just want to know that this guy can lead a normal life again. That said, it really sucks that he was hurt like this. He was a up-and-coming superstar. Very, very highly recruited out of high school, he was a Ted Ginn-clone in build and speed, although his open-field moves weren’t as good as Ginn’s. He was a 10.1 100-meters guy- no one could cover him one-on-one when he went deep. [/quote]

There is not enough information to begin to guess. “Broken” does not give any clues to the severity of an injury. A cracked vertebra is minor. A crushed vertebra can include spinal cord injury and is serious business. Also, It’s hard to say what stabilization techniques are being used for the spine. Even with no spinal cord damage, steel holding the spine together is not exactly what anyone wants.

In regards to spinal cord damage itself, IIRC, prednisolone administration was begun in 1987 for spinal cord injuries. If given shortly after an injury, it can prevent the swelling that causes the spinal cord to self destruct at the site of injury. However, each injury is unique.

4est hit it on the head, that stuff’s pretty situation specific.

Woods injured his back Friday morning in a voluntary off-season workout.

According to OSU head athletic trainer Rob Hunt, Woods is expected to be
moved out of the intensive care unit this weekend and could be discharged
from Mercy Hospital in the next several days.

The family of Artrell Woods wishes to convey their gratitude for the show of
support they have received since the injury. They also request that any
future inquiries regarding Artrell’s recovery be directed to OSU media
relations. 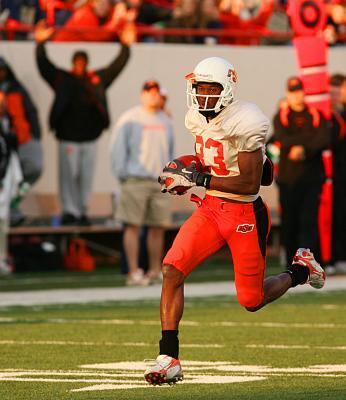 Multiple sources said it’s too early to draw any conclusions, but Woods was moving his toes and flexed some muscles after undergoing surgery for 3 1/2 hours Friday at Mercy Hospital in Oklahoma City.

"I was told surgery went well,ï¿½?? offensive coordinator Larry Fedora said via cell phone, driving back from a vacation in Florida. "We’re concerned about his health, but are encouraged that our medical staff and doctors are providing the best care possible.ï¿½??

Sources said a disc was put back in place during surgery after Woods suffered a vertebrae injury from a "freak accidentï¿½?? during a step-up drill that is designed to build leg strength.

"I’m driving back from vacation, so I don’t have any details,ï¿½?? wide receivers coach Gunter Brewer said in a brief cell phone conversation, "but when I talked to him on the phone at the hospital, he was in good spirits.ï¿½??

The injury occurred Friday morning during a common drill for high school, college and pro athletes. In the drill, the athletes place between 75 and 100 pounds of weight behind their shoulders and step up and down off a box. The routine doesn’t require a spotter.

According to sources, Woods twisted an ankle and suffered the injury after he lost his balance.

It’s too early to speculate whether Woods will play football again. It could be several days, possibly weeks, before doctors can address Woods’ long-term prognosis.

In a press release, OSU head athletic trainer Rob Hunt said Woods is expected to be moved out of intensive care this weekend and could be discharged from the hospital "in the next several days.ï¿½??

Coach Mike Gundy and his staff have been on vacation the past week before meeting on Monday to begin preparation for the upcoming season. Gundy was unavailable for comment but was expected to arrive in Oklahoma on Saturday.

Woods primarily played on special teams and had two receptions last year as a true freshman. Following a strong spring performance, Woods was one of the leading candidates to start opposite all-Big 12 wide receiver Adarius Bowman.

Unrelated to the Woods’ brothers from Millwood, Artrell Woods arguably was the offensive MVP in the spring game after hauling in four catches for 111 yards and two touchdowns.

"Artrell is one of our starters, a big part of what we do offensively,ï¿½?? Fedora said. "You hope for the best.ï¿½??

A three-time All-American at Georgia, Pollack fractured his C-6 vertebra while making a tackle in a Sept. 17 game against the Cleveland Browns. Pollack was in a restrictive halo for three months and underwent surgery on Jan. 3.

Pollack suffered no paralysis and has been able to resume daily activities. His agent, R.J. Gosner, said Pollack’s goal is to resume his NFL career, but Pollack said in a statement last week, thatthe nature of the injury forces him to take it a step at a time.

"I’m grateful for my recovery to this point and I’m working out every day to get my full strength back,ï¿½?? Pollack said. "Any final decision on football is still down the road for me.ï¿½??

In OSU’s press statement, Woods’ family conveyed their gratitude for the show of support they have received since the injury. His family also requested future inquiries regarding Woods’ recovery be directed to OSU officials.

Back luck though and I hope he recovers!