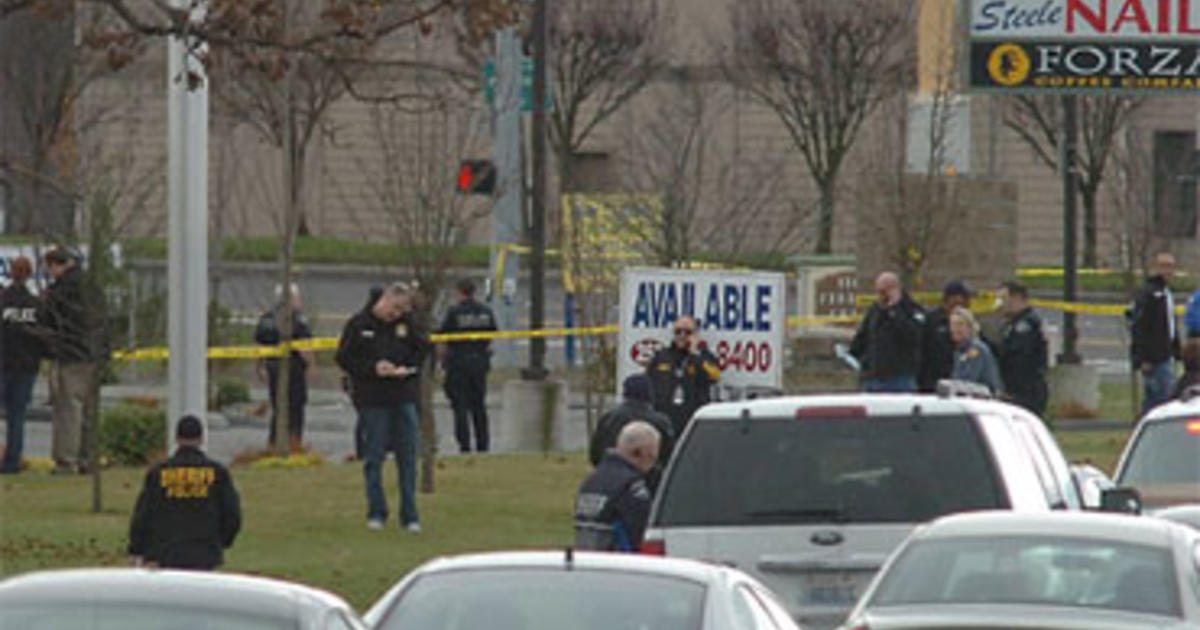 Four police officers were shot and killed Sunday morning in what authorities called a targeted ambush at a coffee house in Washington State, a sheriff’s official said.

Officials at the scene told The News Tribune in Tacoma that two gunmen burst into the Forza Coffee Co. and shot the four uniformed officers as they were working on their laptop computers, then fled the scene.

Pierce County Sheriff’s spokesman Ed Troyer said investigators believe the officers were targeted, and it was not a robbery.

Troyer told the newspaper “it was just a flat-out ambush.”

CBS Affiliate KIRO reports that the four law enforcement officers - three men and a woman - were with the Lakewood Police Department.

KIRO reports that the main suspect is a black male, 5’8" - 5’9", in his 20s or 30s, with scruffy facial hair, wearing a black coat and blue jeans. He was supposedly carrying a handgun, and may or may not have had someone with him.

Police say the suspect is considered armed and very dangerous.

KIRO reports that eyewitnesses were so traumatized by the event that they have had difficulty answering investigators’ questions.

The coffee shop is near McChord Air Force Base in Tacoma, south of Seattle.

“We hopefully will have answers, but there is nothing more we can tell you,” Troyer told KING-TV. “That’s as cold-hearted as it is.”

Roads were blocked around the attack. A witness driving past told the newspaper he saw an officer on the ground just after the shootings.

Last month, Seattle police officer Timothy Brenton was shot and killed Halloween night as he was sitting in a cruiser with trainee Britt Sweeney. Sweeney was grazed in the neck.

Christopher Monfort, 41, of suburban Tukwila, was charged in the shooting. Days after the shooting, Seattle detectives attempted to question Monfort at his residence. Police say that Monfort then ran from the detectives and tried to use a gun. The detective shot him.

Pretty fucked up, Thats 5 seattle area cops gunned down in cold blood within the past month.

They say the killer might have gotten shot so hopefully he is laying in a ditch somehwere right now bleeding out.

Yeah I just saw that on CNN. Four cops starting their 8am shift with some coffee and boom, all four dead because of some scumbag that like horsepuss said, is hopefully suffering somewhere right now.

The sad thing is this guy has a pretty long history of crimes…including rape of a child.

Times like this make me wish that every citizen had a ccw and was proactive in their lives. Scum like this would be stopped and NOT allowed to perpetuate. Hope the officers rest in peace and the scum gets his or theirs.

The perp was in an Arkansas prison serving 60 years for aggravated assault and Mike Huckabee commuted his sentence and set him free.

[quote]Tiribulus wrote:
The perp was in an Arkansas prison serving 60 years for aggravated assault and Mike Huckabee commuted his sentence and set him free. [/quote]

I wonder if that will become Huckabee’s “Willie Horton.”

Of course, you and I are RACIST for even bringing this up.

[quote]Tiribulus wrote:
The perp was in an Arkansas prison serving 60 years for aggravated assault and Mike Huckabee commuted his sentence and set him free. [/quote]

Is this true? Could you post a link to your source of info? Interesting if this is true.

[quote]Gregus wrote:
Times like this make me wish that every citizen had a ccw and was proactive in their lives. Scum like this would be stopped and NOT allowed to perpetuate. Hope the officers rest in peace and the scum gets his or theirs. [/quote]

You are absolutely correct.

Recently, it has been reported in law enforcement journals that the general opinion of police tacticians(firearms instructors, trainers and tactical officers) was that active shooter incidents like Fort Hood, Virginia Tech etc. can only be effectively countered by widespread ccw. Politically corrected chiefs who answer to liberal mayors collectively shit a brick, but they are all worthless and barely qualify as cops. On most police matters, this one in particular, you want to listen to the in-the-trenches tacticians.

This worked in Israel and it would work here.

However, just having a gun is not enough. Just this weekend, I went to an accident where a guy got hit by a car. There was a large crowd there when I arrived and guess what everybody was doing? Standing there with their hands over their mouth. In my experience, very few people will step up and do something in critical situations. Most of the times that I can remember, the people that did step up were off-duty cops, firefighters, medics or ex-military. Not saying that those groups are perfect either. Hell, I can’t get a lot of the officers I train to carry a gun off-duty. I have no patience for that mentality.

Training and a sense of responsibility are everything.

[quote]cremaster wrote:
Tiribulus wrote:
The perp was in an Arkansas prison serving 60 years for aggravated assault and Mike Huckabee commuted his sentence and set him free.

I wonder if that will become Huckabee’s “Willie Horton.”

Of course, you and I are RACIST for even bringing this up.

Very first thought I had, although in this case Huckabee’s actions didn’t lead as directly to the crimes as they did in the case with Dukakis in 88 if I remember right.

Suspect in Cop Killings Was Out on Street Despite Lengthy Rap Sheet, Sentences

Questions continue to swirl as to how and why Maurice Clemmons, an ex-con who at one time faced more than 100 years behind bars, was allowed to live free.

I guess this one from FOX will count with the libs because they are fully exposing one of their own. They have had Huckabee’s face, literally, on the screen all morning in association with this. If this we’re Jennifer Granholm I wonder how quickly the oh so objective MSM would have jumped on it.

I don’t understand the setting of bail for violent crimes. I mean yea, A guy gets a DWI you aren’t going to hold him in jail for a month till he gets his day in court. But for someone with a past record of violent crime, you set bail for a guy? Why? Why not just say, no bail? Is it within the courts rights to do so? Is it just about making some more money off the guy?

Can ya believe this? From what I read the SWATS cornered this guy in a house last night and have been staking it out ever since trying to get him to surrender and they finally go in the slippery bastard isn’t there.

Sad story. I hope they catch him soon and with lethality.

[quote]Vegita wrote:
Tiribulus wrote:
The perp was in an Arkansas prison serving 60 years for aggravated assault and Mike Huckabee commuted his sentence and set him free.

Is this true? Could you post a link to your source of info? Interesting if this is true.

Im gonna speak my mind for a minute and say I wouldnt be surprised if the guy they are after wasnt even the guy that did it.The only reason the cops are after this guy is because he is a scum bag and he was thought to have been in the area at the time of the shootings.

I live in the seattle area and I can tell you there is alot of crime around seattle and tacoma, especially tacoma.The reports I have read said that the shooter must have been handy with a weapon because there werent bullets sprayed all over the place like if it was just some guy firing rounds.

My guess is the shooting stemmed from a previous arrest of a gang member or something along those lines.I hope it was the current suspect for the sake of the cops being on his trail but I think it could have been someone else.

I think I am unqualified to utter a single syllable beyond what is in the news and that may be wrong too so you may be right for all I know.

I swear people think I am crazy when I tell them the shit I saw and dealt with. When you spend so much time in an environment as he did, you no longer have fear of law enforcement. Hope they put 1 in the head and 2 in the chest when they find him, I don’t want to see this clown sit on death row for ages.

Mike Huckabee talks about this.

Ding-dong, the perp is dead…

I just saw that. Thank God.