JonnyTMT, you are lucky you get to have a opportunity to watch this my friend. Hope you enjoy it. :). You’ll have to update us on who wins.

TMT makes history as two former MT world Champs fight MMA
Body: For the first time in the history of Thailand, 2 World Champion Muay Thai fighters will square off in an MMA fight inside the cage as Berneung WMC World Champion for TMT fights against Singyok (Legacy) and former Lumpinee Champion.

Both fighters have 200+ Muay Thai fights and extensive BJJ ground game and MMA training and are the main event @ BBQ Beatdown VI being held after Phuket’s first ever Submission Grappling NO Gi / BJJ tournament being held at TMT on jan 17, 2009 @ 10:00 - 6:00 p.m. BBQ, awards ceremony for tournament hosted by UFC veteran Mike “Quick” Swick", and MMA and Muay Thai fight starts at 7:30 p.m.
at the camp

Yeah I’m looking forward to it. Berneung is a beast, he could do some serious damage with those little 4 oz gloves. He’s been training hard in BJJ as well so it will be interesting to see how he does if it goes to the ground. I’ll post the video and pics for you guys.

Berneung won by decision, was a good fight with both guys showing ground skills. Here is a highlight vid of the event, full fights vids will be up soon

that sounds fucking scary LOL malapeit is also fighting MMA and muay thai now. once again scary shit. He’s smaller than me but stupidly strong… we were bullshitting after a fight and he picked up me up like a little kid and threw me on his shoulder. 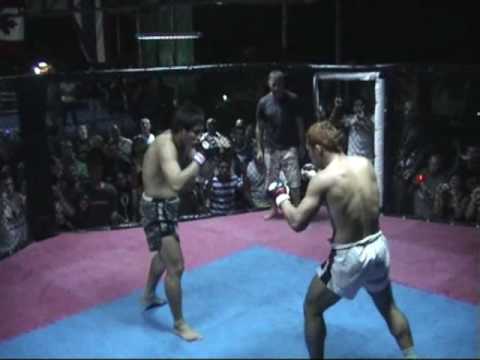