i feel pain in the forearm near the wrist when i throw things, do curls and generally do everyday stuff that engages the forearms much. How do i fix this?

i think i should add some more info

How about a picture with the location of pain specifically marked? 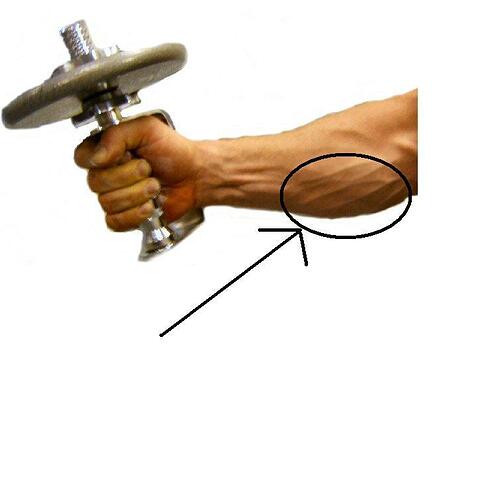 here it is. it hurts on both sides, and as i mentioned it hurts if i hit the bone the rigth side of the forearm when i hold it with the palm facing down to to the ground

thats a really bad picture, but basically it hurts on the right side of my forearm( with palm facing down) when doing curls,throwing or some basic everyday activity. it also hurt when even gently hitting the bone in the same area.

Which forearm are you talking about, left or right? Any recent increases or changes in activity? What is your normal activity (sports, lifting, etc)?

[quote]LevelHeaded wrote:
Which forearm are you talking about, left or right? Any recent increases or changes in activity? What is your normal activity (sports, lifting, etc)?[/quote]

the only thing i do is i lift, 3 times a week. i tough the problem was that my forearm was weak so i started doing wrist curls last week, other than that i have always done dumbbell curls because barbell curls has hurt my forearm since summer.

i did work at an electronic and home appliance store for on week as a school project. basically what i did was that i and this employee delivered stuff like washing machine, refrigerator. some of the washing machines was ridiculously heavy at 100 kg but i doubt thats what did it. i mean i have been doing deadlift for over a year now and that has never hurt my forearm

as i said it hurts when i curl with a barbell, throw stuff, help someones barbell off the rack when spotting bench press. i naturally tough that weak wrist extensor was the problem but i am not sure.

anyways to help you understand where, when curling the barbell with the palms under the bar it hurts on the

The issue is most likely the flexor carpi ulnaris muscle. It is on the “top” side of the ulna and runs all the way up to the elbow. most people think the problem is a “flexor” muscle because the pain created when curling. However, if you did supinated chins you probably won’t get the pain. Take a hard ball or rolling pin and specifically roll that muscle near the olecranon process (elbow bump). you should notice an improvement very quickly.