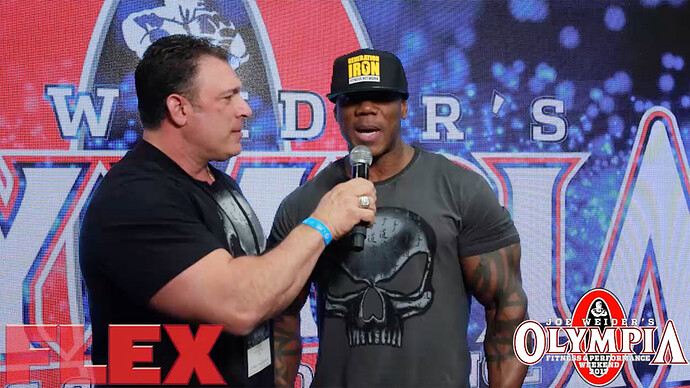 Call it unfinished business. Kenneth “Flex” Wheeler, perhaps the greatest bodybuilder to never win the Mr. Olympia, will return to the contest stage at Joe Weider’s Olympia Weekend in Las Vegas, September 14-17. The 51-year old icon, who was born...

Though I admire him and Levrone, I’m not surprised if some wonder, “Why?” Keep in mind I am not knocking on them, but I am curious on their motivations.

Did he have a whole host of health issues? Now, at what I’m assuming is close to levrone’s age, he thinks he can cash in on his name? I don’t get it either. Obviously he’s been on what he probably refers to as a TRT dose, but certainly appears to have kept him larger than the average full kidney failure replacement recipient male.

Athletes will always be wired differently. They just want to compete. Was there a lot of talent in classic at olympia though? He might have a better showing than Levrone because the judges didnt seem to clear on what they wanted. Arash was the only one with the classic physique that I saw. Even the winner of it had features that should have been marked down for. As long as he does not embarrass himself, it might make it seem like a more impressive comeback than Levrone.

I know Cal Von Moger wants to compete in it too. Hopefully the big names bring more attention to it.

Classic physique is a good choice for Flex. He has those crazy muscle bellies and small joints, which suits better than going down the size for size sake route.Less of an extreme cocktail and amount of drugs needed than regular bodybuilding, so less strain on his transplant kidneys.
Probably my all time favorite physique for modern bodybuilding, he should have won several Olympias.
Kev Lev did not look a patch on his former physique. Severely missing his former size in the hamstrings. Impressive effort no doubt, he still looked better than most of us regular guys on juice ever will.
I would imagine Flex thought his Pro career was cut prematurely short, due to severe health problems. Hard to be a regular guy after being a god of the bodybuilding world, fame, money, attention. very interested in seeing how he goes.

I’m not hating at all here, I loved Flex and Kevin back in the day, but obvious health implications aside, this is a great way to ruin your legacy.

Mike Quin once mentioned that comebacks never work and simply backfire and there seems to be some truth in that. Don’t get me wrong, I’d love to see any of the 90’s guys comeback and be 95% of what they were, but it’s extremely unlikely it will ever happen

I’d be curious to see Vince Taylor after 12 months in Kuwait though ; )

haha!maybe he’s going to market his new book on how to do half reps and get away with it

Mike Quin once mentioned that comebacks never work and simply backfire and there seems to be some truth in that. Don’t get me wrong, I’d love to see any of the 90’s guys comeback and be 95% of what they were, but it’s extremely unlikely it will ever happen

I think some people want to defy the fact that due to age, the body simply is not what it once was and never will be.

this is a great way to ruin your legacy.

I disagree. Any athletes legacy is created while he/she is in their prime. For example, no one really talks shit about Michael Jordan for his attempt to play baseball and then his not-so-awesome comeback into basketball. People talk about how awesome he was in his prime.
Same with Muhammad Ali. People don’t really talk about how he was still boxing (and not well) YEARS after he should have retired. Rather, Ali is still remembered for what he did in his prime.

Levrone and Flex will always have their primes as a legacy. Kevin’s “failed” comeback this past year didn’t tarnish his image at all, in my opinion.

Classic physique is a good choice for Flex.

As long as he does not embarrass himself, it might make it seem like a more impressive comeback than Levrone.

I think this presents a very interesting context for Flex’s comeback. He could really shine with the weight limit that CP has.

That’s actually a very good point and given me something to think about. I don’t hold any of those guys in lesser regard for coming back and not being at their pinnacle best…

It’s strange but I know that if someone mentioned Kevin Levrone to me two years ago, I would have immediately thought about a God like creature with thin skin and ballooned out muscle bellies only a couple of people on earth could ever achieve. I held him in high regard, and many still do. Today when I hear his name I think of how we last saw him.

I followed Kevin’s youtube channel and progress in his lead up… maybe he was too confident, bordering on cocky at times - who knows. Arnold’s 1980 comeback somehow hasn’t done anything to tarnish his previous efforts for me…

I hope Flex does well

Flex always seemed to have a reputation for not working very hard. All the stuff I have seen of him training in the good ol days, he seemed to have impeccable form(not half reps, but I mightn’t have seen the right clips). He might not have been as strong as Levrone, or Yates but whatever he did worked pretty damn well for him.

yeah my comment was tongue in cheek reply to a comment about ninjas, so I was kind of playing around. I was talking about the way Charles had Flex doing chins in a number of videos ; )

The level of intensity in the videos I’ve seen has always been low with light weight and the face pulling high - how much of this was for the camera is anybody’s guess. His form was impeccable on some things and sloppy on others. There’s nothing wrong with that if it worked for him, which it obviously did. He had insane genetics and access to legitimate drugs.

During the late 90’s I saw first hand what real IGF can do with a couple of people I knew and it was absolutely retarded, with changes seemingly taking place every day, so it’s hard for me to assume that all the 90’s pros were rocket scientists who did everything optimally.

I can’t help but wonder how he might have looked if he trained balls out though. His drug use and diet were clearly on point for his body, yet Dorian smoked him for years despite having vastly inferior genetics = )

It appears flex didn’t place in the top 32 contestants. His upper arms still looked pretty top notch,
but he appeared to lack back width from the front. His calves looked undersized, he was accused of having implants back in his heydays, so maybe he doesn’t have implants any more?
Still he looked better than most guys will at 52 yo. I think he should give himself more time to regain some more of his former size in other bodyparts. One year of serious training was not enough.
I hope his good health will continue, and that he will continue training…Still one of the greats of bodybuilding despite his latest results.

Lol.Thanks for the heads up. I was looking at an official Mr Olympia page, list of competitors on one side, and olympia point standings. It was not actually the results. Well 15th is quite a bit better than not placing in the top 32(that was actually out of 21). 3 quick uppercuts swiftly administered to self:slight_smile:

Those “calves” certainly make you think back to all of the implant accusations that surrounded him during his heyday. It actually looked like they were two different sizes.

Congrats to him for doing it. He must have known at a certain point he wasn’t top 3 and still chose to do it, which I think takes some integrity

I wonder if he did it natty, He was always known for having amazing genetics for BBing, and his arms and delts still look phenomenal, but the back, legs, and overall mass obviously are not there now. Still would be the best built guy in 99% of gyms

I wonder if he did it natty,

Well, He did claim one Olympia competing “Natty” back in the day, but it was still a pretty hefty TRT dose. I’m, fairly sure there’s a difference between the dosing for an average male who needs to be kept healthy and functioning, and what most doctors who deal with bodybuilders who have a history of PED usage prescribe to keep them close to what they’ve gotten used to over the years of non-stop reliance.

For example, no one really talks shit about Michael Jordan for his attempt to play baseball and then his not-so-awesome comeback into basketball.

Didn’t he comeback and win another 3-peat championships? I was still in diapers when Jordan came back, but even if his numbers went down, I don’t know if I can consider winning three more rings a not-so-awesome comeback lol

Didn’t he comeback and win another 3-peat championships?

He did. Michael Jordon has stepped away from basketball 3 times. His first comeback was spectacular where he added an outstanding outside game to his pre-retirement bag of tricks. Like the the first time around, he retire after his second three-peat.

He then returned to the Wizards where he was okay in a shizen side before retiring for good. I think he had some ownership in that side, so just stepping onto the court probably netted him plenty.