Fixing Butt Wink in the Squat

I am still in the process of fixing my butt wink so I can return to squatting heavy weights and I wanted to share what has worked so far and what has not worked just in case someone has the same problem and is doing an internet search.

I’ll start with what has either not worked or had only a minimal effect. Stretching my hamstrings has not seemed to help. I did this three times a day for several weeks and was able to tolerate a bigger stretch in the hamstring stretching position, but it did not transfer to a deeper squat.

Foam rolling has not seemed to work, at least not directly. I’ve foam rolled my hamstrings, my glutes, my TFL, and my hip flexors. The muscles started out painful during the initial rolling but after multiple sessions, there were few, if any spots that produced pain. I know rolling supposedly increases “tissue quality”, but I didn’t see any ROM gains in the squat. It may have helped me recover from training faster so I could train more frequently, but I can’t say for sure.

I also have done a lot of dynamic stretching drills for the hips. These have had a moderate impact and I feel they are more useful than passive stretching exercises. I can’t point to one that really improved my squat depth but they all seemed to make my hips a little more mobile.

I have also found strengthening the abdominals to be helpful. I started out with front and side planks but they became easy and I began doing ab rollouts. The ab rollouts really increased the “stiffness” of my abs.

One video clip I found suggested that lack of motor control was the problem and the solution was to concentrate on bracing your abs and actively pulling your hips into flexion on the descent. I found the bracing to be a good tip.

Actively pulling my hips into flexion would theoretically tilt the pelvis anteriorly and preserve the low back arch, but I didn’t notice much change in the depth I was actually able to achieve before my back rounded when I did this. Maybe it would work better if my hip flexors were stronger?

Since the hamstrings stayed loose, the pelvis was not pulled posteriorly resulting in butt wink. I tried this and surprisingly, it helped. It wasn’t a miracle cure but I was able to go a little deeper in a front squat or with a weight held out in front of me. I learned how to contract my abs in the same way so I could do a bodyweight squat without any extra weight and hit the same depth.

I found overhead squatting to help the most with buttwink. I’ve done overhead squatting every day with only the bar for less than a couple weeks now and I’ve seen the greatest gains in mobility. I believe the thoracic extension of the overhead squat is what helped me preserve my low back arch the most. I used to pay greater attention to keeping my chest up, but during the Squats and Milk program (a.k.a. 20 Rep Squats), I was more focused on getting enough air, so I developed the bad habit of not bracing my thoracic spine into extension.

In summary, to eliminate butt wink, focus on bracing the anterior abdominals and also bracing your thoracic spine into extension. Practice this with overhead squats and progress to activating the same muscles with bodyweight squats. Do this daily–frequency is important to increasing mobility and learning a new motor pattern.

If anyone has their own experiences with fixing butt wink, please share.

Good thread man. Thats the second time ive seen overhead squats recommended so ill be sure to try them. And youare most definitely right about frequency being key

x3 on frequency for anything mobility related. I’m trying out the oly squats for every warmup I go to gym including upper body. I’ve also done light goblet squats at home every day to help with it when I used to do this. Just be careful you don’t end up going on other end of the spectrum and end up with anterior pelvic tilt or also called sway backed.

Great summary of your trial-and-error experiments! I’m currently trying to work out a minor version of the same issue and am going to try incorporating more front squats into my program again. Interesting point about the ab rollouts; I’ve also found Paloff presses to be very useful for working in ab “stiffness”.

I’ve got really poor thoracic mobility and can’t properly execute an overhead squat; otherwise, I’d be programming these in right away. For whatever reason, though, I feel as though the mobilization exercises that I’ve been doing for my thoracic spine have somehow transferred over to my lumbar spine/pelvis as well and that I’m now able to maintain my lumbar arch a bit better at depth. No idea if there’s any cause-and-effect here, but it’s still been interesting for me to observe.

Always look at your SETUP, especially bar placement, first. You would be surprised how little changes can have a huge impact on depth and lb rounding.

Thanks for this. I was actually literally about to post a thread about it when I saw this. Life saver. haha

OMG I FOUND A VERY HELPFUL Video today so Ima try to post it…! 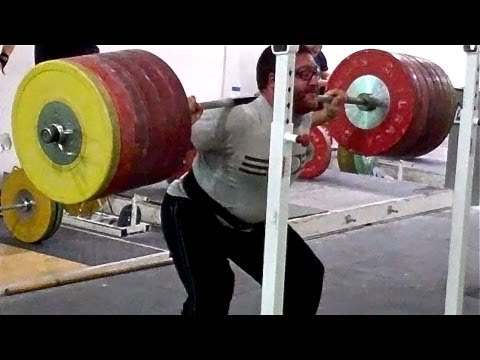 If i posted it right…

I really tried to fix mine when I first started, and nothing seemed to help much. after I quit messing with it and got stronger it got better. I would not worry too much about it unless it is excessive and limiting your squatting. Take a look at some of the bigger squatters and note that the majority of them still have some sacral nutation(pelvic tuck) that is necessary to fully stretch and activate the glutes.

[quote]Spock81 wrote:
OMG I FOUND A VERY HELPFUL Video today so Ima try to post it…!

Really nice find there. I wish I watched it before my squat workout. I’m going to have to try that stretch towards the end of the vid and consciously relaxing my hip flexors the last bit of ROM of my squat.