I’ve been on TRT pinning subq for some time with no issue. I just started my first cycle. I’m planning on running 400mg Test C and 300mg NPP per week. I decided to dose EOD. With both compounds that puts me pushing 1.24ml per injection. I opted to pin my quads IM which I’ve never done. First time I used my typical 27 gauge 1/2” and only injected .86ml of the NPP in the quad. The injection itself was painless but afterwards it gradually got worse until it was so painful I was limping on it. The site had no swelling or redness. I did get a small bruise in the shape of a line about an 1” or 2” below the site after a day or two. I’m not sure if that was related or not. I’m familiar with the injection process, I’m confident the site was correct and I was slow, steady and sterile. The gear is from a known good source. I’m not allergic to the carriers bc I use test from the same UGL which has the same carriers and it’s fine. I tried everything from foam rolling, stretching to working it but it hurt bad for two days. Then by the 3rd day it was pain free like it never happened. By then, it’s time for the next dose so I hit the other quad, this time NPP followed by the test, pushing 1.2ml total. I used a 25 gauge 5/8” this time. Same result. I’m about 5 hours post injection and it is killing me. No redness, warmness or swelling just very, very painful.

Pinning quads is for people who hate themselves. Glutes (ventro or dorsal) are way better. Also, there is zero need to pin eod with either of those drugs. I know broscience demands NPP be used that way, but actual science says otherwise. Peak saturation from one shot hits about ~84hrs after injection. No need for eod unless you just want to reduce the volume of oil per shot.

I think for a quad injections 5/8 is a bit shallow, just an opinion. As far as it hurting, well you put over a ml into virgin tissue, so a ml worth of volume had to tear open (sort of). It’s part of the game but you can guard against it. First I would urge glute injections, any glute injection I lay down on my side like I am that chic in the Titanic and leo is drawing my. This way my glute is completely relaxed, no weight on it. Also do it after the shower so I am clean and relaxed. Now when you are on your side you can kind of poke around with the needle and there is actually a spot where there just seems to be less nerves because if I go slow enough there I don’t even feel it. Now when you inject, go slow and smooth obviously, I even sometimes take a half minute break at the half way point. This just let’s some of the oil disperse rather than opening a full ml size gap inside the tissue. I don’t really know if it actually helps but I do it and I very seldom have issues with PIP.

Those 5/8 needles in my opinion are good for shoulder injections and lat injections, provided you have lowered the subcutaneous level of fat.

For glute I like 1.5 inches but a 1 inch can work. For quads and I do occasionally have to use them, I like 1 inch. Just like on the glute if you poke around with the tip of the needle you can find a spot where there is less sensation on the quad but I would save quads for when you run a cycle with multiple compounds and have a lot of injections.

With the NPP there is a chance the UGL used EO or just higher levels of BB. Both of those are organic solvents and EO would probably be used by the real pharmaceutical companies if less guys reacted to it. Some just get PIP from it. The UGLs use it to have real nice thin finished products, so we can inject them faster and smoother but it ends up bitting us in the butt (literally). Really with any short(er) ester like phenylpropionate typically have a higher melting temp which translates into harder to brew and harder to hold in the carrier oil. They way around this is the organic solvents like BB or EO. Chances are your test enanthate if it was 250mg then it had a very low amount of BB in it. So that NPP probably has higher BB and possibly EO in it which will definitely contribute to the PIP.

To Iron, you typed “84” did you mean “48?” Reaching peak concentrations 3.5 days after injection seems counter intuitive for the phenylpropionate ester. If course for a 'short" ester it actually weights more than the enanthate ester.

Peak saturation from one shot hits about ~84hrs after injection.

What’s the half-life on that then?

Still the same, which is like two(ish) days? The half-life decay is not necessarily linked to the absorption and blood concentration of the hormone itself. Which is…not usually how it works.

But I need to amend my previous statement. I’m now seeing two different charts based on the same study. So somebody fucked up their plotting (one is older and one is newer) but I cannot see the study. Here are both. You decide which one I guess. 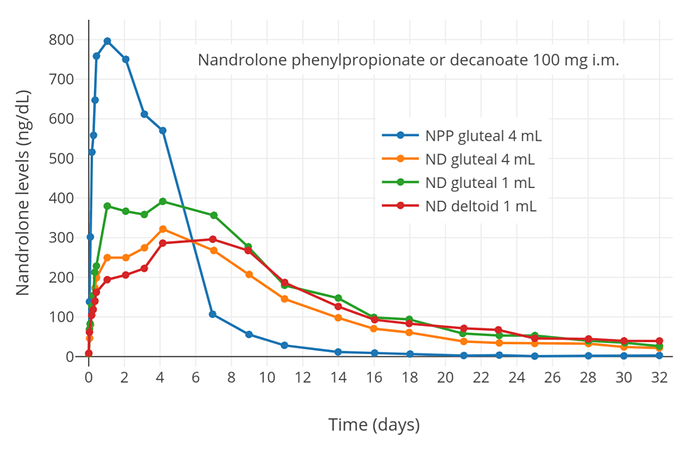 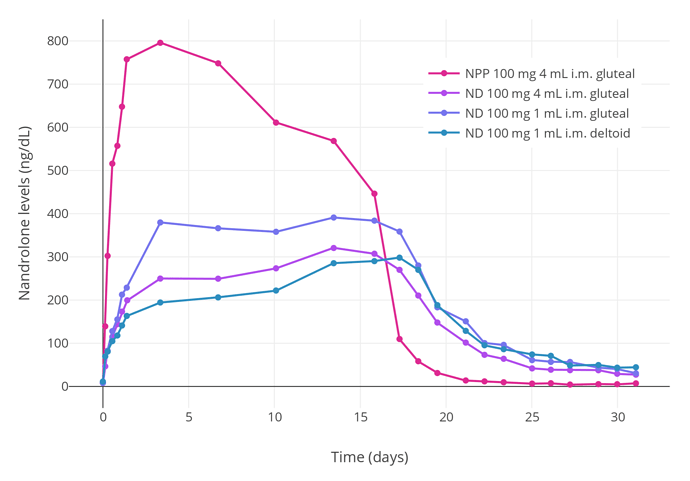 That second one looks mucked up on the x-axis, Iron. I don’t really feel like doing the conversion from ng/dl to mg, but that area under the curve on the second one has to amount to more than 100mg. The first one shows peek concentration near the known half-life, which makes more sense.

Indeed. Assuming the first one is more accurate—and again, I’m not sold but open to the posibility—is still say you could get away with twice weekly injections and not notice any disruption. Guys pin NPP daily and it’s simply unnecessary.