Fedor - Barnett Fight Is Off

Barnett failed a pre-fight test. Looks like Vitor Belfort is gonna step in. Dangerous fight for Fedor if you ask me.

"Affliction Entertainment and M-1 Global are looking for a new opponent to face Fedor Emelianenko at Affliction â??Trilogyâ?? on Aug. 1 at the Honda Center in Anaheim, Calif.

Multiple sources have told Sherdog.com that the California State Athletic Commission will not license Josh Barnett after a positive test result. Calls to Affliction Entertainment were not immediately returned. The CSAC said a comprehensive statement would be issued Wednesday.

Barnett said he had not been notified of any issues with his eligibility as of Tuesday evening.

â??I took my test three weeks ago. I would have thought I would have heard something by now,â?? Barnett told Sherdog.com.

However, the former UFC heavyweight champion said he had not checked his phone messages recently and later added, â??No matter what happens with this, I can assure you I will clear my name. This will not be something that I am defined by.â??

Vitor Belfort has agreed in principle to face the worldâ??s No. 1 heavyweight on 11 daysâ?? notice, according to two separate sources close to the negotiations. One source told Sherdog.com that Emelianenko will have the opportunity to choose between Belfort and Bobby Lashley. Lashley has denied knowing anything about replacing Barnett, though.

“I don’t know if I would want it right now. Since the last fight, I haven’t really been into training again,” he said. "That fight is next week. That would be something I would really have to take a look at. To just jump in there probably wouldn’t be the smartest thing for me right now. A lot of people would say that might be a money fight. They figure, ‘If we give him enough money, will he do it?’ That’s what people tend to look at. I don’t want to get into fighting for the money so much right now.â?? 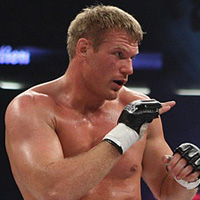 Affliction Entertainment and M-1 Global are looking for a new opponent to face Fedor Emelianenko at Affliction “Trilogy” on Aug. 1 at the Honda Center in Anaheim, Calif.

Now this sucks if true.

This is bad news. I haven’t been this amped for a fight in a while. Fingers crossed everything works out, who knows, Kimo turned out to be alive…

I just read this on mmajunkie. I can’t imagine anyone fucking up this bad.

If it ends up being Vitor that fights him, I might still buy it. The other fights are good and I would probably watch Vitor fight anyone. His comeback has me intrigued. This is a smart move on Vitor’s part. He has nothing to lose and an insane amount to gain.

He loses and he he is just a MW who lost to the best HW on the planet on 11 days notice. He wins and it’s the biggest payday in his career, for the fight itself and for his next contract. Shit, he even puts up a good fight and he’ll be set in his next contract.

Vitor is the only option for Affliction as I see it. I think that fight brings in more buys than getting Werdum, Rogers, Lashley, Monson, or scrapping the Buentello vs. Ivel fight.

Maybe we will now see Barnett vs. Overeem since neither seem capable of making it over here for a fight?

welp, if true affliction is done with. Makes UFC’s chances of getting a fedor contract slightly better.

what a joke. there isn’t a heavyweight out there that they could give a one-fight deal? I’m not a big Dana fan, but he would never make his prize HW fight a MW.

Sources are saying Atencio confirmed this news. It is a bad time to happen because no other true heavyweights out there are established. Saying this, would anyone else like to see Brett Rogers fight Fedor? I know this sounds crazy, but I know he would be psyched to take the fight.

It seems like the people being considered don’t even want to fight. I was looking forward to this PPV and I would still buy it if it was Fedor vs. Rogers.

[quote]Kreal7 wrote:
Sources are saying Atencio confirmed this news. It is a bad time to happen because no other true heavyweights out there are established. Saying this, would anyone else like to see Brett Rogers fight Fedor? I know this sounds crazy, but I know he would be psyched to take the fight.

It seems like the people being considered don’t even want to fight. I was looking forward to this PPV and I would still buy it if it was Fedor vs. Rogers.
[/quote]

There are probably a lot of guys they could sign that would have a better chance at beating Fedor, but they need a name. sending a MW in to fight Fedor is a freakshow at best, but part of me wants to see this fight and might actually pay to see it.

Another fighter fails a drug test in the CSAC

Sucks. Was looking forward to that, that said, I would tune in to watch Vitor fight anyone. Met him when he was in London training for his cagerage fights. I even have photos with him in the cage after he won. Really cool guy!

That was really bad.

I can’t understand, why would Barnett do something like that? He knew he was going to be tested and he must have realized that if he got caught, given his previous infarctions, it would be very bad for his career. Maybe the test was positive because of traces in the supplements, but that’s not likely.

Edit: The substitute fighter is cool - Vitor is always in exciting matches.

Word on the street is he tested positive for the Ganja

[quote]Xen Nova wrote:
Word on the street is he tested positive for the Ganja[/quote]

If that’s true he could be the dumbest fighter ever.

Nevermind I was wrong…

The California State Athletic Commission has denied Josh Barnett a license because he tested positive for an anabolic steroid, the CSAC said in a statement Wednesday

The California State Athletic Commission has denied Josh Barnett a license because he tested positive for an anabolic steroid, the CSAC said in a statement Wednesday.

Barnettâ??s June 25 drug test was positive for 2a-methyl-5a-androstan-3a-ol-17-one, said the CSAC, which learned of the results Tuesday and informed promoters Affliction Entertainment and M-1 Global that Barnettâ??s Aug. 1 fight against Fedor Emelianenko would not be approved.

The CSAC said Barnettâ??s test was â??observed in the presence of a CSAC representative and the sample was sent to the World Anti-doping Agency test facilityâ?? at UCLA.

A former UFC heavyweight champion, Barnett was suspended for six months by the Nevada State Athletic Commission in 2002 due to a post-fight urinalysis that revealed the presence of three anabolic agents (Boldenone metabolite, Fluoxymesterone metabolite and Nandrolone metabolite) in his body when he defeated Randy Couture to win the title. Barnett denied using the anabolic steroids and challenged the NSACâ??s testing protocol.

He has not responded to Sherdog.comâ??s requests for comment following his recent test in California.

Evidently Atencio is talking with three different possible replacements, none of which are Werdum or Rogers.

I am guessing that they would need a big name to recover enough PPV buys and tickets to pay Fedor’s salary. If not, they may be better off financially, scapping the fight all together. All depends if they are looking for revenue or profit I guess.

Outside of Lashley or Tito, I don’t see anyone that is going to save enough revenue to pay for themselves and Fedor. I guess they could try Monson, Karitonov(can he get a visa in time?), Rothwell, or even AA if he is not still suspended. Probably not much of a draw with any of these guys though. No idea how many of these guys are actually trainging right now either.

“We are working on it now,” a source inside “The Snowmanâ??s” camp told Fighters.com Wednesday afternoon. Monson is excited about the possibility.

“We want the fight, but also to be paid comparably to others who have fought Fedor,” Belfort’s trainer, Shawn Tompkins, said via text message.

Fighting Fedor in 10 days… you better pay me something SERIOUS.

these guys have a ton to gain by fighting Fedor, they shouldn’t let not getting serious money stop them. this is an opportunity of epic proportions for a lot of guys.

When Atencio was asked wheter he was considering scrapping the whole care, he said “not at this point”. I would have preferred a resounding no chance in hell.

Shawn Tompkins, head trainer at Xtreme Couture, has confirmed to The Fight Network that Vitor Belfort has signed on to fight Fedor Emelianenko August 1st at the Affliction ‘Trilogy’ event in Anaheim, California