She doesn’t have the nomination yet…

Hillary Clinton is proposing a raft of policy ideas for Congress to consider if she is elected president, and already promising to go around lawmakers if they won’t work with her…

she vowed executive action, all but anticipating that Congress, which is likely to remain at least partly controlled by Republicans, wouldn’t back her proposals. In each case, she would go beyond what the Obama administration has done.

She has promised to expand President Barack Obama’s executive action on immigration, shielding more people in the U.S. from deportation, even as the existing policy is being challenged in the courts.

Mrs. Clinton also has said she would try to rewrite firearms regulations so more sellers are required to conduct background checks on potential gun buyers. There is scant support for new gun restrictions among Republicans.

Mr. Obama has used executive authority to advance his agenda, with his moves on immigration and energy policy infuriating Republicans. The prospect of more of the same under a Clinton presidency is troubling to them. “It has really made it hard for compromise and for coordinated work to happen together,” Sen. Mike Crapo (R., Idaho) said in an interview Wednesday. "Because if the president says, “Look, it’s either my way if you’ll pass a law to do it or it’s my way through an executive order, that doesn’t result in negotiations.”

I think most American’s have no idea. I know I didn’t. The link was only open to subscribers, so I cut and paste it here in it’s entirety. Sorry about the huge block of text, but everyone should know about this.

"Republicans talk often about using the “power of the purse” to rein in a lawless Obama administration. If they mean it, they ought to use their year-end spending bill to stop a textbook case of outrageous executive overreach.

This scandal comes courtesy of the Justice Department, which for 16 months has engaged in a scheme to undermine Congress’s spending authority by independently transferring dollars to President Obama’s political allies. The department is in the process of funneling more than half-a-billion dollars to liberal activist groups, at least some of which will actively support Democrats in the coming election.

It works likes this: The Justice Department prosecutes cases against supposed corporate bad actors. Those companies agree to settlements that include financial penalties. Then Justice mandates that at least some of that penalty money be paid in the form of “donations” to nonprofits that supposedly aid consumers and bolster neighborhoods.

The Justice Department maintains a list of government-approved nonprofit beneficiaries. And surprise, surprise: Many of them are liberal activist groups. The National Council of La Raza. The National Urban League. The National Community Reinvestment Coalition. NeighborWorks America (which awards grants to left-leaning community organization groups, and has been compared with Acorn).

This strategy kicked off with the $13 billion J.P. Morgan settlement in late 2013, though in that case the bank was simply offered credit for donations to nonprofits. That changed with the Citigroup and Bank of America settlements, which outright required $150 million in donations. The BofA agreement contains a provision that potentially tees up nonprofit groups for another $490 million. Several smaller settlements follow the same mold.

To further induce companies to go the donation route, Justice considers these handouts to be worth “double credit” against penalty obligations. So while direct forms of victim relief are still counted dollar-for-dollar, a $500,000 donation by BofA to La Raza takes at least $1 million off the company’s bill.

The purpose of financial penalties is to punish, and to provide restitution to real victims. The Justice Department would make the case that this money is flowing to groups that aid the targets of supposed banking abuse, such as homeowners. But that assumes the work these groups do is targeted at actual victims, which it isn’t. It assumes that the work these groups do in housing is nonpartisan, which it isn’t. And it ignores that money is fungible. Every dollar banks donate to the housing arms of the Urban League or La Raza is a dollar those groups can free up to wage an assault on voter ID laws, or to help out Democrats.

This is the Obama administration riding roughshod over the most basic of congressional powers?those of spending and oversight. Adding to the insult, Justice is routing money back to programs that congressional Republicans deliberately stripped of funds. In 2011 Republicans eliminated the Housing Department’s $88 million for “housing counseling” programs, which spread around money to groups like La Raza. Congress subsequently restored only $45 million, and has maintained that level. These bank settlements pour some $30 million into housing counseling groups, thereby essentially restoring all the funding.

It’s also a classic Obama end run around the law. House Judiciary Chairman Bob Goodlatte, who has spent a year investigating and pushing back against Justice’s slush fund, has noted that the Miscellaneous Receipts Act requires money received by the government from any source to be deposited in the Treasury. Directing banks to give money to third parties is a slippery way of evading that statute.

He?'s also noted that Justice’s own internal guidelines discourage donations to third parties, precisely because of the risk it “can create actual or perceived conflicts of interest and/or other ethical issues.” No kidding. Mr. Goodlatte has discovered that some of the activist groups that stood to benefit from these transfers were involved in getting the requirements put into the settlements. He?s called on Justice to end the practice, and the department?'s response has been to double down.

Which is why Mr. Goodlatte crafted a one-sentence amendment to the annual appropriations bill for Justice, one that strips the department of money if it continues with its slush-fund ruse. His amendment passed easily on a voice vote this summer.

Yet Justice has aggressive Democratic defenders in the Senate, who strongly oppose including the provision in the final, year-end omnibus. And some Senate Republicans seem willing to oblige them. Which is nuts.

The GOP is currently wrangling with Democrats over which policy riders to include in that final bill, and that?s well and good. But the Goodlatte amendment is so germane as to be obvious. It goes to the heart of the question at hand “spending” and to Congress’s right to control the national purse. If Republicans are interested in containing a president who routinely ignores the rules, here’s a place to stand.

The RINOs of the GOP establishment are not interested in changing a thing. They surrendered the power of the purse the FIRST DAY we gave them the Senate! That is why we must focus on two things: Article 5 convention of states and electing CONSERVATIVE representatives.

Personally, I am donating money to many Conservatives who are not in my district. There are many RINOs who are up for re-election - we have to get rid of them.

The article you posted is COMPLETELY outrageous. Yet the MSLM won’t give it a second thought. Nothing will be done about it. And the average American - regardless of dem or republican - “should” be outraged by this abuse of executive power… But they aren’t. Cuz they’re stupid, lazy and cannot critically think their way out of a wet paper bag.

Barack Obama is a butt fucking commie, muslim sympathizer, but he’s not stupid. He’s done EXACTLY what he said he was going to do: fundamentally transform America.

Nothing is going to be done about it.

Let’s see where this goes.

I think you are someone who often/ usually votes Democrat? I’m curious what your reaction is. Is it outrageous to you?

I think you are someone who often/ usually votes Democrat? I’m curious what your reaction is. Is it outrageous to you? [/quote]

I think you are someone who often/ usually votes Democrat? I’m curious what your reaction is. Is it outrageous to you? [/quote]

Sorry, I don’t post in this forum often and I might have misunderstood that from the San Bernardino thread. It sounded like you were taking some heat from the conservatives here, so I assumed. How would you describe yourself politically?

The article you posted is COMPLETELY outrageous. Yet the MSLM won’t give it a second thought. Nothing will be done about it. And the average American - regardless of dem or republican - “should” be outraged by this abuse of executive power… But they aren’t. Cuz they’re stupid, lazy and cannot critically think their way out of a wet paper bag…

…Nothing is going to be done about it. [/quote]

I had no idea that this Justice Dept. shakedown with “donations” going to specific left-leaning groups was happening - And on such a HUGE scale. That’s a lot of money.

I think you’re right about the average American either not knowing anything about it, or being apathetic.

As for the expansion of executive power, we’ve all seen that happening. Apparently Hillary plans to take it even further if she’s elected. I was kind of stunned at how she seemed to be bragging about her ability to just go over and around the other branches of government. Members of Congress are also elected by the people, last time I checked.

Discouraging right? I’d like to think that this kind of government duplicity/ corruption couldn’t happen here. 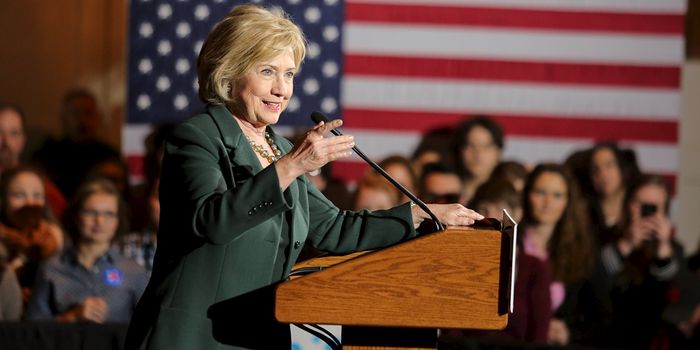 Clinton Is Already Vowing to Overreach

In The Wall Street Journal, Karl Rove writes that Hillary Clinton is already vowing to overreach if she becomes president.

“Remember Hillary’s pledge in 2007 to 'rein in the presidency?” Neither Does She."

“A Clinton presidency would ratify the new post-Constitutional order. Mrs. Clinton explicitly says that she will disregard the separation of powers and assume the legislative branch’s prerogative.”

"…this election will decide whether America will remain, in the words of John Adams, “a government of laws, and not of men.”

“Obama has taken unconstitutional actions and sabotaged the separation of powers…tearing at the very fabric of the Constitution.”

James Madison, “The accumulation of all powers, legislative, executive, and judiciary in the same hands may justly be pronounced the very definition of tyranny.” “There can be no liberty where the legislative and executive powers are united in the same person.”