Evicting Someone During Covid

About a year ago, I got a new tenant. She paid the rent on time for a few months then she started to pay late. From past experience I knew that was going to be the trend. She asked if she could pay the rent in two payments and I agreed. Then her boyfriend moved in so I thought that there wouldn’t be any rent issues because there would be two incomes. No. The first half of the rent started to get paid late to the point that instead of being paid on the first of the month, it was paid halfway through (when the second payment would have been due). So the second payment ended up paid at the end of the month.

I let things go because they were paying and it’s a pain to go through the process of finding new tenants. Then Covid hit so I was also more forgiving because I wasn’t sure about their work situation. The problem now is that they have fallen over a month behind. I cashed their second payment for November’s rent a few days before Christmas. We are not into January and they haven’t paid anything for December. I believe her boyfriend is now unemployed so they are down to one income but, she originally rented the apartment by herself.

My wife is telling me to kick them out. We don’t rely on the rental income for survival so it won’t hurt us financially. The thing is, there is Covid, her boyfriend isn’t working, they have pets. It’s the middle of winter. Where can they go? It would be very hard for them to find a place because most won’t allow pets (especially a pit bull) and they probably won’t be able to come up with a security deposit and first month’s rent. I guess if they have family who will take them in that would be an option but I don’t know what that situation is like for them.

Obviously, if they continue to fall further behind, they will have to leave but if I do tell them to leave, I want to also give them some time to figure out where they will go. If it weren’t for Covid I would have moved sooner to let them know that they need to pay on time or find a new place. I also love animals so I don’t want her dog to end up in a shelter if that becomes her only choice if she does find a new place.

My wife thinks I’ve been patient and compassionate enough but I don’t like the idea of putting someone out on the street under these current conditions. Am I just being a bleeding heart pussy? I have evicted people before so it’s not like I’m afraid of taking that step it’s just the way things are right now with Covid and some people’s ability to work. I know there must be some posters who are also landlords, so I was wondering what you thought. Even if you aren’t a landlord what do you think?

That’s a tough situation. I understand your desire not to put them out, but it sounds like they might be the type that if you give them an inch they try to take a mile.The pandemic does not excuse them from financial responsibility and you have more than worked with them.

Maybe give them a deadline to catch up, so that they will know in advance eviction is coming.

My wife, the soon to be attorney, would say make sure that whatever they agree too you get them to sign it in writing.That way they can’t come back and sue.

Not a land lord, but I can understand the situation. I don’t think you are being a pussy. In some cold weather states you can’t evict tenants from like November until May (something like that in my state).

Is there anything you can do to ensure some sort of payment? Require an automatic withdrawal? Perhaps this can’t be done. I think in this case communicating with them exactly where they are with you is fair. Tell them if they keep getting behind you will evict them. Lay out what they need to do to stay, and if they don’t meet it then evict.

That way they can’t come back and sue.

They don’t have a lease. It expired and I didn’t want to give them a new one because I had a feeling that there would be a rent issue at some point. So it’s just month to month. Also, in my state, it’s not easy to evict someone unless it’s for non payment of rent. It used to be that tenants had to not pay rent for a few months before you could evict them. So you had people who knew the laws that would stop paying rent for that time period and then move out just before they would get legally evicted. Then they would move on to the next landlord to take advantage of.

But they changed the laws so that if they don’t pay the rent you can immediately move to evict them.

Your tenants may be getting some government covid checks any day now. It’s almost tax return season too. Maybe, maybe they’ll use that government cheese to square up with you.

Is there anything you can do to ensure some sort of payment? Require an automatic withdrawal? Perhaps this can’t be done.

I think it’s a financial issue with them. Automatic withdrawal is convenient and you don’t have to worry about paying late but I don’t think they have enough money in the bank. They are basically pay check to pay check which doesn’t make sense to me. But I don’t know what their spending habits are or if they have debt.

That’s true. And if her boyfriend is not working he should also be getting unemployment.

Maybe, maybe they’ll use that government cheese to square up with you.

Agreements in writing always hold up in court, verbal contracts can be binding too, but its much harder to prove.

I still say give them a deadline to catch up by. You may not rely on the rental income, but I am sure the extra is useful income.

They are basically pay check to pay check

I used to have my mortgage payments come out every other week and timed to my pay checks. I really liked that, but then refinanced, and haven’t figured out how to set that up with the new loan holder. Perhaps you could work something like that out? It seems people are better at saving when it automatically comes out, perhaps they would be better at paying?

I still say give them a deadline to catch up by.

I think that’s what I’ll do. I’ll wait until Friday and if they haven’t paid, I’ll give them a deadline before they will have to leave, either by choice or I go to the courthouse and file the paperwork which will only buy them a couple of more days.

It seems people are better at saving when it automatically comes out, perhaps they would be better at paying?

That makes sense but I think they have a lack of money problem and not necessarily a spending problem. The boyfriend has a newish vehicle that isn’t running so I assume he can’t afford to fix it. I don’t know if he is still making payments on it though. I know he borrowed a vehicle to get to work but now he isn’t working. I think she, the original tenant, might not be working now either. I don’t see them 24 hours a day but they are close by and I’ve noticed that she has been home during the times she was normally at work.

It used to be that if I needed to get into her place, or needed someone to get in there to repair something, I would have to make sure they were either going to be home or knew in advance so they could remove their dog. The last few times I had to send someone over to fix something she told me the person could come whenever because her boyfriend was always there. Now it seems like she is always home as well.

That also makes it hard to evict them from a human perspective. I sometimes think I should pay someone to manage things and let them be the bad guy.

What state are you in? City?

There are a number of locations where they won’t let you evict anyone, for basically any reason (e.g., NYC).

I believe there may even be a federal moratorium at the moment.

I’ve been lucky, so far. But I lease up scale properties (which I would never be able to live in, personally) that come with a letter of credit as guarantee – so they are paying.

And then very down scale, but in a deeply Jewish neighborhood and the tenants would be shunned in the neighborhood if they cheated me (or I screwed them over when down). Fortunately, they’re trucking along.

Edit: See info re: eviction moratorium. This expired but was re-started: 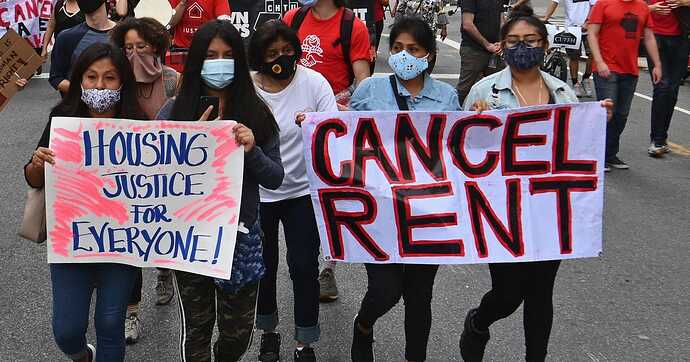 The CDC will use its authority to keep certain renters in their homes until the end of the year, but they will still owe missed rent.

What state are you in? City?

I’m in CT and for non payment it’s easy to evict someone. Last time I did it, I went to the courthouse for the paperwork, then went to a marshal to serve the paperwork, and the tenant was gone two days later.

I just checked, thanks for mentioning it, and in CT the moratorium has been extended until Feb 9 of this year, so it expires soon. It means I can’t file an eviction case yet but it does give me a deadline to offer the tenant. Of course I won’t be surprised if the moratorium is extended again.

Hire a property manager and let them handle it. That way, you don’t have to worry about if you’re being an asshole or a patsy. Your manager handles collecting rent and evictions if necessary.