I know he has been discussed some on here, but not sure if this has been posted. If so, sorry, a search didn’t yield anything new. 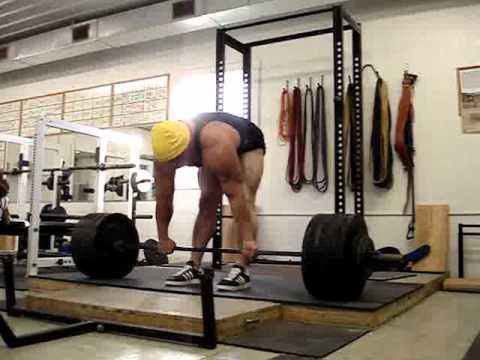 This kid is unreal.

Well dang I see he has posted on here before. Anyhow, this is a recent deadlift and threadworthy IMO.

Note how low he gets when he starts pulling the slack off the bar. His hips go up about a third before the bar leaves the floor but they are already loaded and stay in place without shooting up further and thus placing his shoulders in front of the bar. This is how I’ve been practicing my deadlift for the last year, mainly cause my arms are also longer–ish compared to my torso.

I find it cool because it is the opposite of what you read a lot online about keeping the hips relatively high when you start the lift (“you can quarter squat more than you can full squat”) - that never did anything for me. I find it easier to pull the slack and PULL rather than SQUAT the weight up if I do it the way he does it.

Eric is a perfect example of that technique. I’ve also noticed that the bar comes off somewhat slower but then starts accelerating more and more as it goes up. So the biggest challenge I see is having strong enough back to not round and put your shoulders in front of the bar in that beginning slower phase.

The whole Littlebridge family are retarded big and strong - didn’t all three of them do a meet couple of months ago where they wrecked shit?

What do they feed IT!?