OK OMG i´m gonna have to reevaluate my entire protocol

I’ve watched many doctors talk about ai and get over the past few weeks. From crissler to the anabolic doc and the tot revolution round tables . Essentially what they say is the following:

For example I have nipple sensitivity last week (5th week) and I had a sensitive e2 test done last week as well. I was 100% sure I had e2 welll above normal… I was sure… anyways the results showed my e2 was 27.5… that’s 4 above where I started before trt. Interesting that my e2 symptoms correlate with high e2 , but I don’t have high e2. What’s that mean? I guess body’s adapting to new T and I need to be patient?

If I was on an ai with such a low amount of e2 I would of crashed quick… that would suck. I’m glad I found these folks and this information. 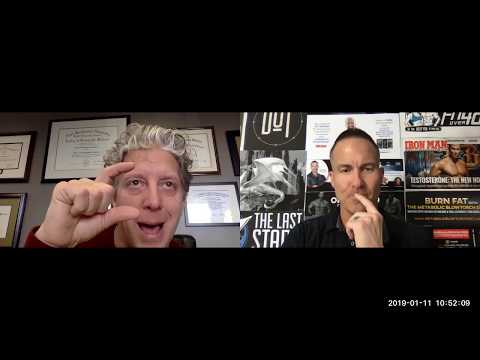 why is it that all of the sudden everyone seems to be so against AIs ??? is that theory from KSman proven wrong ??

That is a good question. TRT is a rapidly evolving aspect in men’s health care, BHRT too for women. As more demand it more doctors will be looking into it. I also think doctors like Neal Rouzier are on the forefront and gaining more and more influence. I believe he is at least part of the reason John Crisler had rethought his AI approach with patients, and himself.

So reducing the dose and increase frequency of injection, i´ll do that.

i also read KSman who is an administrator

Yeah, uh, no. He was not a Mod or Admin. He was a forum member with a high post count, entirely self-taught with no formal training in TRT beyond what he did for himself.

I suggest taking the more in-depth discussion about AIs to another thread, such as this one, rather than continuing it in this thread about Dr. Crisler.

@Chris_Colucci also gang I am not an administrator either. Just so everyone knows.

Honestly, he just didn’t strike me as A suicidal personality. I hope that they’ve exhausted all investigations because how do they know this wasn’t a homicide? I would be interested to see some of the further investigated results. It sounds like his ex was a real piece of work

Honestly, he just didn’t strike me as A suicidal personality.

Depression is a cruel mistress, many times it’s an invisible illness. With severe depression many people seem fine to the public eye when they’re deteriorating rapidly. It’s very sad to hear about John Crisler passing, especially from a preventable cause such as this

Based on what im watching, reading, etc, i think this gad zero corrilation with ai’s. Stopping an Ai would never cause suicidal tendencies. However, i do wonder if he took DHEA and pregnenolone. I “assume” yes. I mean, he was a brillant guy. Dude did CPR on himself during a heart attack. Fucking hell. Aint NEVVVVEEERR Heard of such a thing before.

He was NOT a closed minded non progressive guy. Dude was on the front lines.

We don’t know what was going on behind closed doors, it’s impossible to know the intimate details of one’s life, sometimes you don’t even know the people you think you’re closest too. It’s possible he had a very high stress lifestyle, perhaps some kind of blackmail/extortion was being pulled, maybe he was simply very, very depressed, it’s a shame but these things do happen.

Thats a good point. JC did sever ties with him 7 months ago. He claimed it was because of the Ai but that seemed shakey.

Stopping an Ai would never cause suicidal tendencies

You just never know, hormonal shifts can cause massive disturbances in previously well-balanced individuals. I know multiple therapists/doctors who’ve told me that their female patients experience horrific symptoms around menstruation, granted most have pre-existing mental illness.

Withdrawing from TRT was the worse (BY FAR) experience of my life and took me down a mental path I never thought was possible for me, still haven’t fully recovered. Not comparing going cold-turkey off a hormone to coming off an AI, but we’re all bio-chemically unique and react differently to things. Just saying, anything is possible, especially if he was already stressed.

Are you all saying he came off ai? I guess after a couple decades your body would have issues. I read somewhere in the boards that the body has issues converting e2 if ai is used for too long. .

Regardless, he was a top medical professional in trt and saw things as a challenge. At his age he could easily get back on ai and not have to deal with getting off. It’s not like he’s 40 and expects to live 20-40 years longer. He was 62.

I just can’t see him letting something like removing ai from his protocol get the better of him. He has numerous colleagues who would of consukted him. I heard him say he spoke to other docs often.

Curious about your comment… Who is jc? Why did he cut the relationship. Sorry all new to me… is jc that jay guy from tot revolution?

Lastly, I never understood how one could commit suicide. I just didn’t understand. Then one day I started having the thoughts. Hated waking up. Found no joy in anything but sitting at a video game and playing for hours. I didn’t really contemplate, but I did realize I was going down the path. I was done with life and done staying strong.

Right now I feel much better than about 5 weeks ago when I started trt. Actually early this week I started feeling closer to my normal self and it’s so relieving. It is as though I can breathe easier and little things like music lift my mood. Where as days previous nothing worked. Caffeine didn’t wake me . Working out no longer gave me the buzz. Nothing.

I hope TRT doesn’t cause my preg and dhea to go off balance. I think I’ll start adding that to my quarterly lab test … how does one supplement these two hormones? Are they by pill or shot?

Why did you withdraw from trt dude. Did you get back on it. I do not ever expect to get off.

It was during my first run on TRT. I was having constant panic attacks after 7 months of being fine on it. I wasn’t educated on TRT like I am currently, I just let my urologist lead the charge. It was he who made the decision to take me off because he’d never heard of someone getting anxiety from TRT. Turns out my E2 was sky high and he didn’t think that was an issue. I was on a bad protocol (200mg every two weeks) and just didn’t have the knowledge of SHBG, E2, etc. I’m back on TRT now with a reputable company.

Lastly, I never understood how one could commit suicide. I just didn’t understand. Then one day I started having the thoughts. Hated waking up. Found no joy in anything but sitting at a video game and playing for hours. I didn’t really contemplate, but I did realize I was going down the path. I was done with life and done staying strong.

This happens all the time, I wish people understood that it can happen to anyone at any time, sometimes for absolutely no reason at all.

how does one supplement these two hormones? Are they by pill or shot?

I believe you can get them both in pill/capsule form. My doctor suggested some pregnenolone for sleep a few weeks ago. I declined because I’m trying to dial in my testosterone and I don’t want another factor throwing anything off.

Melatonin works for me if I need help sleeping

Yeah, it used to be a godsend for me a few years ago. Tried it again a couple months ago and it would mess me up good the day after I took it, felt like a zombie. I think it has something to do with the SSRI I got on earlier this year.

I just wanted to add here that while I never knew Dr. Crisler personally, I had actually almost called him last week to consider changing to him. So this is very sad news on many levels.

I want to address the comment about “not understanding why someone would kill themselves”. I have all my life been a positive person and everyone around me feeds off my positive energy etc. I have NEVER considered doing it and let me tell you, when the Dr. crashed my E2 with Anastrozole. Oh… My… God…

All I will say is, yes, the thoughts even crossed my mind several times while I was writing my posts last week. Thank God that feeling has worn off but trust me now from experience. A Happy, very successful Executive and beautiful family, these thoughts actually tried to push against me hard just last week. Do NOT underestimate the power of what we are doing here and the effects of going on the wrong doses, coming off them to fast etc.

It’s real. Be afraid of not understanding and using AI’s properly (or to early). I am now.

I’m really sad to hear this news. I got a lot out of Dr. Crisler’s videos and forum posts. I liked his humility and willingness to course-correct his recommendations based on new research and patient outcomes.

This is yet another example of somebody who, on the surface, appeared to have all his shit together - a successful doctor and famous SME with vibrant health and vitality - but in reality was battling demons very few people knew about. Just another reminder to be slow to anger, quick to forgive, and nicer to everyone than you think you have to be - even nicer than you think they might deserve, because you never know how close someone is to the edge.