The question I have is do RBC and Hematocrit really matter if blood pressure is good, and pulse is good?

My thought is that if RBC is high, pulse and BP should go up. Same thought with Hematocrit. With a mechanical system, we would expect pressure drop to go up with a thicker fluid, and we would expect to have to run the pump motor faster to get the same flow (higher pressure and higher flow or pulse).

Maybe I am missing something here (why I started the thread).

On TRT at least I have a good bit of margin before I am considered too high for RBC and Hematocrit. I just wanted to know if this is reasonable line of thought or if I am missing something. For future cycles monitoring BP and Pulse is easier.

Great questions. I put most of my thoughts and analysis on the matter in this thread that was closed. If you search my name in the thread all the posts will show up. Never got a thoughtful rebuttal. I don’t share the same opinion as Rouzier, Nichols and the “what U-shape trend between Hct and mortality rate?”

Blood viscosity is a complex function of multiple blood parameters so you better be sure of your individual health status before running Hct above 50. In the post below I show why Hct of XX can mean a very different serum viscosity for two different people.

If you can keep blood pressure low and RHR decent on high levels of AAS then be thankful and that’s still not the end of it. Autonomic dysfunction is a real thing, and what happens in a few years down the road when one wakes up one night with atrial fibrillation? Do you have preexisting arrythmia or thyroid issue? Think cumulative effects. It happens.

I read a number of sites. In this particle case, I was providing information to that forum, not getting it. Hey if you find anything factually inaccurate in that work, please let me know. Given the importance of the information and the issue with linking to another site here, I may have to reproduce the entire thread over here. I haven’t seen any posts where someone goes to the trouble of discussing plasma viscosity and its importance when discussing Hct and serum viscosity. But like I said…

Respectfully, you aren’t getting it. I am differentiating the two. With your logic, you call erythrocytosis harmless, therefore it must be harmless. What’s scary is you don’t seem to understand that. Go read my posts. I outline all of this. Here’s one verbatim from ExcelMale: THE DETERMINATION OF BLOOD VISCOSITY IN MAN BY A METHOD BASED ON POISEUILLE’S LAW [image] THE APPARENT VISCOSITY OF BLOOD FLOWING IN THE ISOLATED HINDLIMB OF THE DOG, AND ITS VARIATION WITH CORPUSCULAR CONCENTRATI…

Thanks for sharing his response. Very smooth, I give you guys credit for trying to steer the debate towards terms that may be favorable to your position, regardless of what the other person has said. I can give uneducated folks a pass since they don’t know any better but for an educated person who claims to understand the literature, this is inexcusable. This is what you call an academic con job of “look up here, not down there”. Nowhere in my above posts did I say my main concern was hyperc…

Do you have preexisting arrythmia or thyroid issue? 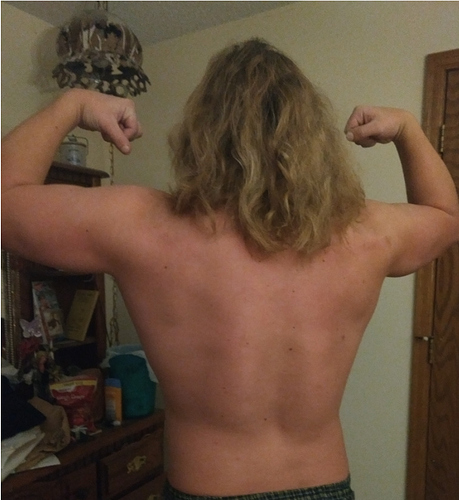 I guess with high AAS, the heart can get hypertrophy without extra effort in pumping blood as the heart is a muscle with androgen receptors. I don’t plan on blasting anything in crazy doses though.

I basically, want to have the mental benefits of TRT, but with a body that is a bit past natural. I am not interested in running grams of gear, and probably won’t do much past a beginner cycles.

Just thinking I would like to monitor BP more in the future (has been good in the past at the doctor). I do measure pulse pretty regularly, and have pretty low pulse for a fat guy (about 55-65 depending on the day at rest).

Not completely hijacking thread just offering something to think about…constant balance between performance, “gainz”, and longevity. Good luck with the body recomposition and keep it up. I like your thinking regarding long term use of thyroid preparations in the absence of thyroid disease and would make sure you are testing TSH, free T4, and free T3 under the supervision of a qualified medical professional.

I have measured RT3 methodically over years and spoke with many MDs about its utility outside the context of acute illness. All honest folks will admit they don’t know.

I’d keep up the calorie deficit and find a long term sustainable strategy for you at the bodyfat level you desire.

If I could go back and speak with younger version of myself, I’d emphasize caution with simultaneously manipulating testosterone and thyroid levels without fully evaluating cardiac status. Even then you never know. It’s not fun when you run into problems and you are being admired by the paramedics asking “where you work out man? Damn Bro!” while they prep to do electroversion on the way to the ER. You think to yourself, “was all this worth it?” Not trying to scare, just true story.

The Compression of Morbidity

Decline in the function of multiple organs may be considered in the context of preservation of homeostasis. Reserve function is required when the organism is stressed in order to restore the normal homeostatic equilibrium. As the reserve of individual organs declines in a linear fashion, the ability to maintain homeostasis in the face of a threat of a given magnitude declines exponentially (Strehler 1960); hence, the observations of physiology and the actuarial observations of Gompertz are reconciled (Figure 2). Natural death must ensue, without disease, when the reserve function has declined below that point, probably about 20 percent above basal levels, at which routine daily perturbations cannot be weathered. A transition from premature death to natural death occurs as the characteristics of the host resistance (homeostatic reserve) become more important than the specific nature of the insult to the equilibrium. The concepts of premature death (due to disease or accident) and natural death (due to senescent frailty) are complementary rather than antagonistic, and any dividing line must be an arbitrary one.

Linear Decline in Multiple Organs Exponentially Decreases the Area within Which Perturbations May Be Restored as Shown Here for Two Organs. Reprinted with permission from J.F. Fries and L.M. Crapo, Vitality and Aging (San Francisco: W.H. Freeman, 1981).

It needs to be balanced for sure. Thinking I could be 240-250 lean, without consequences would be foolish. I do know individuals shorter than me that fit that description. I think later in life they may regret their decisions, and I don’t want to be regretting decisions in regards to longevity.

I like your thinking regarding long term use of thyroid preparations

The more I read about it the less appealing it seems. I worry about heart attack, stroke, and other conditions, and it seems too much T3 can contribute to it. I don’t have an actual reason for concern (no health scares, and I want to keep it that way).

I have measured RT3 methodically over years and spoke with many MDs about its utility outside the context of acute illness. All honest folks will admit they don’t know.

It does seem that a correlation between lowering RT3 and weight loss is present. However, lowering RT3 most commonly involves T3 supplementation, so that confuses things a bit.

If I could go back and speak with younger version of myself, I’d emphasize caution with simultaneously manipulating testosterone and thyroid levels without fully evaluating cardiac status. Even then you never know. It’s not fun when you run into problems and you are being admired by the paramedics asking “where you work out man? Damn Bro!” while they prep to do electroversion on the way to the ER. You think to yourself, “was all this worth it?” Not trying to scare, just true story.

Totally understand your thought process. I was on 25 mcg (now 20 mcg), I think I’ll try 15 mcg and see how I feel. Lower it from there, until I don’t feel good. Maybe I’ll feel good on 0.

It does seem that a correlation between lowering RT3 and weight loss is present. However, lowering RT3 most commonly involves T3 supplementation, so that confuses things a bit.

Good point. My highest measured RT3 (22 ng/dL) was pre-TRT /pre-thyroid meds after having done hard dieting down to 7% BF. Very difficult to keep on muscle mass at this BF level with borderline serum T levels around 400 ng/dL and high SHBG.

First started with T4 monotherapy and couldn’t keep my TSH dialed in given Hashimoto’s. Combination therapy (T4 + T3) resulted in some improvement but then adding in TRT (physiologic levels of Test) helped me titrate TSH very precisely and resulted in gradual reduction in RT3. Androgen usage associated with improved conversion of T4 to T3 and modulation of TBG levels. TRT also added significant muscle mass at already low BF level. Things went south when I experimented with supra-physiologic T levels (using what some around here consider very modest dosage of Test Cyp - 350 mg/week). Experiments don’t come without risk and I won’t be going back there. Best wishes.

My HCT has been elevated for years and it hasn’t been an issue. If you lived in Denver you’d be where I am, numbers wise. Most people living at altitudes don’t drop dead because their HCT went above 54.

I wonder if this guy is reassured that most people living in Denver are not dropping dead because their Hct went above 54?

Ok I’ll try to keep it short but provide enough details. This is my 2nd try with TRT. Stopped first time because of high HCT side effects. I kept making blood donations to manage, but it caused really low Ferritin and was feeling with really low energy. During the first go around I injected once a week and then went to 2X and then 3X a week. No success managing the red blood cells reaction plus I was trying to balance HCG and AI. I decided to do a reset and see if between Clomid and HCG I c…

At some point you were clearly not comfortable with where your Hct was?

I’ve never given blood. It’s damn near impossible for me to do it for reasons that are. It worth going in to. My hct climbed higher than I was comfortable with so in response I lowered my dosage and have increased the use of naringrin (which seemed to have helped a bit in the past). At some point I’ll be stuck doing a bloodletting I suppose. But I want to see how I respond to a lower dose for the next four months.

IMO, BP and HR are probably better indicators of heart work load. I’m not a doctor, but it makes intuitive sense.

It was 58 at that point, which even I had to admit was too high.