First a little info about me. I have been lifting for about 8 years. I have done DC, 5x5 and Agonist/Antagonist Training. I’m about 210lbs with low body fat. Bench 375, deadlift 405 squat 330. The only supplement I take is Ultra 40 and Mass Amino acids, I try and get everything I need out of food. A normal day is about 215 grams of protein and 150 carbs with 70 grams’ fat. My work out plan currently is 6 days followed by 3 days off. So my questions is… Normally I do one body part a day, and I do 4 exercises for that body part on its days. For the last few weeks I have been short on time so I knocked it down to only 2 exercises. I have noticed both strength and size gains by only doing 2 instead of 4. I can not wrap my head around the fact that I’m doing less but seeing more gains. Can someone explain to me why that is?

You’re probably just recovering better. Different things work for different people, at different times. Right now this is working for you which is awesome. Doesn’t mean you have to accept it as the new gospel and declare that less ALWAYS equals more. Its just working for you right now!

At a guess, doing just two exercises you’re subconsciously giving absolutely all you’ve got to those two rather than leaving a bit in the tank to do the other two. So, you’re getting absolutely all you can out of the two you’re doing and it’s ending up to be more than you got out of doing four exercises.

To paraphrase Dan John everything works for two weeks no matter how dumb and every program stops working/plateaus after a few months no matter how good.

Can someone explain to me why that is?

Perhaps it’s because you’re starving yourself? The diet you described amounts to 2100 cals/d. At a BW of 210#, that’s 10 cals/lb/d–not nearly enough to cover your output, much less make optimal gains. Given this, it’s little wonder that a reduction in output resulted in an improvement in performance.

It’s called recovery. Assuming you’ve been working hard the reduction in volume has allowed you to actually see your gains. If you’re always pushing then you won’t be able to peak. There’s a reason competitive lifters taper before a competition.

Where do you have this quote from ? Is it from a book or an article ? Always interesting to hear dan Johns option.

I don’t think the term “less is more has merit” considering that there are situations in which more is better! The people in “the industry” who I’ve seen use this term the most are those who cater to weekend warriors and general-fitness-minded people. I am not putting that group down or those who cater to them, as that will be the crow I belong to one day.

But, as I said, improvements can be made sometimes with more work. 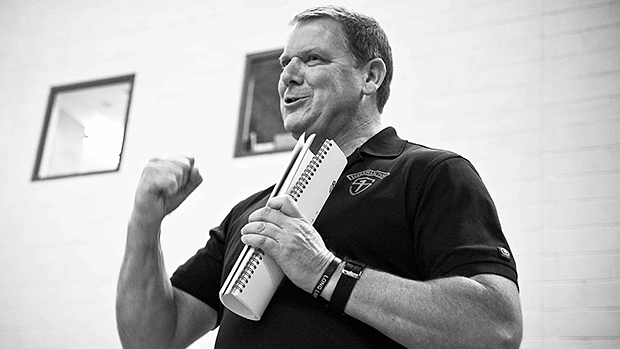 This legendary strength coach shares wisdom on lifting, living, and learning. Apply it all and you'll perform better than you ever have.

Talks about it best in his book Never Let Go