My doc had me donate a pint of blood becuase my red blood cells count was to high. Is this something I should be conserned about for the long run? My current dose is 200mg tcyp weekly Im not taking any AI as my E level has been consistant at 22 so doc said no need for it.
Thanks

WTF another orphan post. Do you have a learning disability?

fuck off nvr mind you can take your bitch ass attitude and shove it clean up your ass. I dont need your condescending remarks. So heres a insult for you, since you feel its ok to insult me…Youre a cunt… Anyone else whos not totally conceited and rude feel free to give me constructive advice…Thanks

High T helps create red blood cells which thicken your blood,
you need to be mindful of this as it can cause stroke.
Donate blood once every three months and you should be fine.

Lots of info (like this) is in the stickies, or available via the search box.
KSMAN is a wealth of info, and has helped many people here, I think his E2 might
be a little high today, thus his response…forgive him, he’s a good egg.

So I guess I should hunt for past posts to find your history.

High hematocrit lowers micro circulation in your capillaries. Yes, there can be negative effects on your organs, brain, retina, and body in general. We have seen head aches, cramps and sore muscles reported in a TRT context. 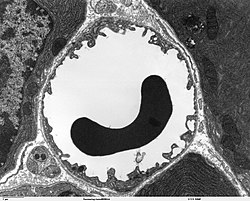 A capillary is a small blood vessel from 5 to 10 micrometres (μm) in diameter. Capillaries are composed of only the tunica intima, consisting of a thin wall of simple squamous endothelial cells. They are the smallest blood vessels in the body: they convey blood between the arterioles and venules. These microvessels are the site of exchange of many substances with the interstitial fluid surrounding them. Substances which cross capillaries include water, oxygen, carbon dioxide, urea, glucose, Dur... 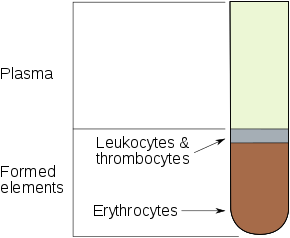 Generally at both sea levels and high altitudes, hematocrit levels rise as children mature. These health-related causes and impacts of elevated hematocrit levels have been reported: 1.Fall in blood plasma levels | 2.Dehydration | 3.Administering of testosterone supplement therapy | 4.In cases of dengue fever, a high hematocrit is a danger sign of an increased risk of dengue shock syndrome. Hemoconcentration can be detected by an escalation of over 20% in hematocrit levels that will come befor...

In most cases I would blame this on the higher T dosing. Most docs would tell you to reduce your T levels.

Meanwhile, stay hydrated. Take some aspirin as that alters proteins on the surface of red blood cells and makes them more slippery. Fish oil also acts as a blood thinner.

If you feel different/better after donating blood, that is a boost from improve blood flow in your brain. That is good diagnostic indicator that things were a problem.

If hematocrit or serum iron are elevated [lab work somewhere?], you will need to avoid iron fortified food,s, breads and supplements.

You said your red blood cells count was too high, but what were the actual numbers? I ask because one blood draw might not be nearly enough to get you back into normal range.I’ll use my own recent experience to illustrate.

When I started TRT my family physician didn’t get starting hemoglobin/hematocrit. Prior lab work values about 6 months before the start of TRT were Hgb 16.9, Hct 51.9. Reference values for all measurements in this post are Hgb (14-18), Hct (42-52).I was started on the usual antiquated 200 mg T Cyp. After 2 months of the predictable rollercoaster ride I talked my Doc into 100 mg/week. At 3 months, she took basic labs, (Total T, Free T, but no Hgb or Hct) and cut me loose to self inject, which I did at 100 mg per week.

At about 5 months in, I started noticing that my bruising and bleeding patterns were different. Also, my face and chest coloration were somewhere between red and purple. I decided to give blood, since I had read about the possibility of high Hgb and Hct. They measured Hgb via finger stick, and read 22. I went into panic mode, and when they measured my blood pressure it was too high for me to donate, so I had to fuss and stew over the weekend until I could see my Dr. Their lab measured Hgb 20.5 and Hct 61.6.I got a prescription for therapeutic phlebotomy, and was finally able to get my first blood draw that week. Over the course of the next month, I had 4 double red withdrawals. That’s 8 units of red cells, which got my Hgb down to 15.I did basically everything KSman recommended. In addition, I doubled up on my BP meds until blood was back under control and switched my T schedule to 40 mg twice a week. Hgb and Hct have now been stable for 3 months. I had been checking them every 4 weeks, but will now go 8 weeks between checks.

I’m lucky I didn’t die or stroke out.

So, I think what PKNY means when he says it’s normal is, yes, it can happen. Until you hava a handle on your levels, I would recommend frequent labs to monitor levels. If you’re unlucky like I was, you might have to donate more often than once every 8 weeks. Most blood banks require a prescription for draws more than once every 8 weeks for a single unit. Some won’t allow you to donate if there’s any medical reason you need to dump blood. If that is the case for you, you’ll have to pay for therapeutic phlebotomies to get your blood under control. (Or get a Handy Dandy Home Phlebotomy and Oil Change Kit).

My case is extreme, but it does happen. Get your actual numbers, and stay on top of it. If you have any questions, feel free to ask.

Best of luck.
Edited to change donation frequency from once/3 months to once/8 weeks.

Thanks guys my HCT was 39 my HGB was 14 I donated a pint and am scheduled to drop every 8 weeks. I figure that should do it. Right now bigest concern is the Estro at 22. I had it re-checked and now its 29. I feel fine but its odd that the new doc is so reluctant to just script armidex or anastrozle. Thats stuff looks cheap & easy to find online so Im not really too worried about it. The liquid dex is probably the way to go right? Or maybe I should just push harder for it since Im a paying customer

For small dosing, you really need a liquid product where the dosing increment is by the drop and there is 28-30 drops per mg at 1mg/ml. Drops per ml vary by the composition and even the material and shape of the dropper. Glass VS plastic can have surface tension effects. So count the drops.

Many find that the co-pay on Rx anastrozole is way more expensive than from a RC source. The RC sources are well proven.

HTC=39 must be a typo. That is very low. It would be good to be able to reference your earlier posts concerning HTC.

[quote]KSman wrote:
Many find that the co-pay on Rx anastrozole is way more expensive than from a RC source. The RC sources are well proven.[/quote]
Watch yourself, I just got screwed along with a lot of other guys. From what I hear, the company got raided but is still taking orders on line, you aint getting your supplies.