Do You Even Need An Arm Workout? Probably Not

The Truth About Biceps and Triceps Training

Many lifters don’t need direct biceps and triceps work. But some need a little, and some need a lot. Here’s how to know what’s best for you.

Is Your Arm Workout Really Necessary?

Let’s break that down.

I’m not against direct arm work. You can read the advice I’ve given before on it. But the body has a limited capacity to handle systemic stress from training and you don’t need to train every muscle group equally.

Look at your training time and effort like money. You need to invest it where you’ll have the greatest return possible. Simply put, invest more training money on muscles you want to develop the most to get the look you want.

I’ve trained female figure and bikini competitors who only focused on hamstrings, glutes, upper back, and shoulders. They simply didn’t need to train arms, chest, or even quads to get the look they needed to win. That’s why it’s important to know what kind of look you’re shooting for and which muscles need to be emphasized to get that look. 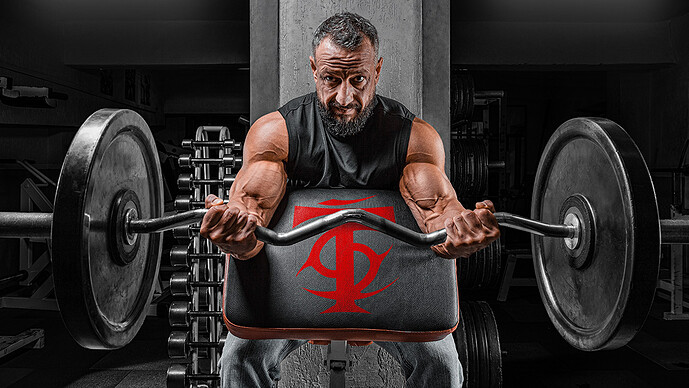 TC Luoma published an article about research that found no added benefits on strength or hypertrophy when isolation work for arms was added to a training program built on multi-joint movements (1).

The researchers conducted an eight-week study on experienced bodybuilders. The participants were all on the same basic program of multi-joint exercises, but half of them did extra arm work.

After eight weeks, there was no difference in arm growth or strength among all the subjects. The conclusion was:

“The addition of single-joint exercises to a resistance training program that already contains multi-joint exercises brings no additional benefit in terms of muscle performance and anthropometric changes in trained men, whether they’re using anabolic steroids or not. These results might help to design more time-efficient resistance training programs since it suggests that trained men can save time not including single-joint exercises in their routines and still achieve optimal results.”

The only problem? How much can an already experienced bodybuilder progress in just eight weeks? This was the one major limitation of the study.

It’s an important one. While a beginner can gain a good amount of muscle at first (newbie gains), after the first two years of serious training, muscle growth will become much slower. After three years of serious training, gaining five to seven pounds of muscle in a year is exceptional. You might’ve gained 20 pounds your first year of training and 10 in the second, but it slows down after that.

So if you can gain five to seven pounds in a single year as an experienced lifter, how much overall muscle growth can you get in just an eight-week period?

On the other hand, strength is gained faster than muscle mass. And since the groups using isolated arm work didn’t get any stronger than the group not using it, we can conclude that direct arm work isn’t necessary to get optimal strength gains.

This means you can still get nearly the same overall gains by focusing solely on multi-joint movements, and this backs up what I’ve seen while training experienced athletes.

If you’re a normal person with a full-time job, a family, financial stress, etc., doing more work might actually hurt your results, especially if you’re natural. If you can get pretty much the same results without direct arm work, focusing on training efficiency and skipping direct arm work (or doing only a small amount) might be beneficial. 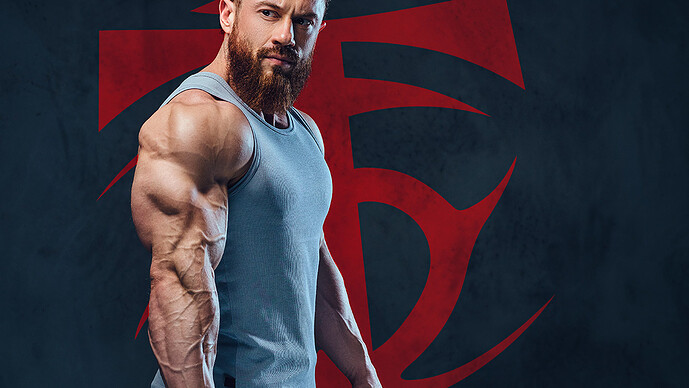 Is Pulling as Effective as Curling?

Using the proper multi-joint exercises can be as effective at stimulating the biceps and triceps as direct work.

For an exercise to stimulate growth, you must recruit a large proportion of the muscle fibers, and you must, at one point during the lift, lengthen or stretch those recruited fibers while they’re under load. This is the eccentric or negative phase of the lift.

For example, a muscle could be heavily recruited in an exercise, but if it works isometrically (think abs in a squat) it won’t be optimal for growth. You’ll still get growth, and the muscle will still get stronger (mostly isometrically), but you won’t get maximal gains.

However, the horizontal rowing exercises didn’t have the same effect on the biceps. In rowing variations, the biceps activation was less than half of what it was for the other exercises.

The take-home message: If you do chin-up or pull-up variations (and likely other forms of vertical pulling like the supinated lat pulldown and neutral-grip lat pulldown), you’ll get plenty of biceps stimulation.

Now, anecdotally, we know that horizontal pressing greatly stimulates the triceps. Close-grip bench presses and dips are two of the best triceps builders out there. In fact, the triceps likely need even less direct work than the biceps.

If your goal is to build an athletic, muscular physique, you likely don’t need direct arm work. Skipping it can allow you to either recover faster from your workouts or invest in a bit more volume on multi-joint movements without exceeding your systemic capacity to handle stress.

How To Tell If You Need Direct Arm Work

Not sure how much (if any) direct arm work you should do? Just see which of these categories best describes you. 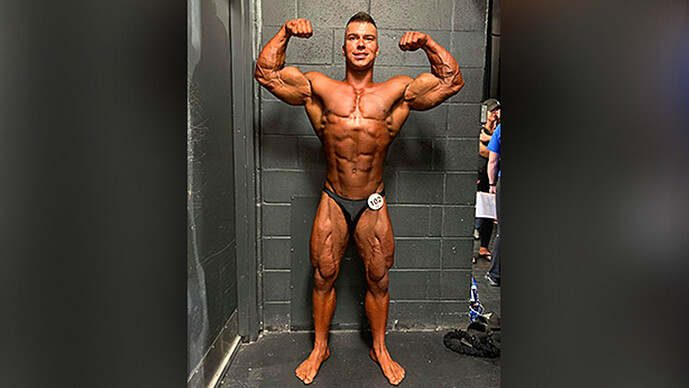 His arms really stand out, yet he doesn’t do any direct arm work. Good genetics and a physical job (where he carries heavy stuff and does lots of sledgehammer work) make the direct arm work unnecessary.

These lifters don’t need as much direct work as they might think. One direct biceps and triceps exercise twice per week is plenty.

3. Lifters Who Need Significant Arm Work for a Period Of Time

Those who have a poor mind-muscle connection with their arms will benefit from a good amount of direct work for 4-6 weeks. When your mind-muscle connection is poor, you’ll have a harder time involving these muscles optimally during the compound movements. As a result, you won’t get properly stimulated to grow by using only multi-joint lifts.

One of the main benefits of isolation work (for arms or anything else) is that you more easily improve your capacity to contract and feel a certain muscle. It’s much easier to concentrate on contracting your biceps if it’s the only muscle involved in the exercise than if several other groups are working at the same time and can take over most of the work.

As such, performing frequent direct arm work for 4-6 weeks can be beneficial for future gains by improving your mind-muscle connection with your biceps and/or triceps, making your future training on multi-joint movements more effective.

After that block of direct training, the lifter would need to keep a small amount of direct work to maintain the adaptation and motor skills to contract those muscles properly.

4. Lifters Who Need A Lot Of Direct Arm Work

Most competitive bodybuilders will likely need a fair amount of direct arm work in their weekly training. In bodybuilding, you need a distorted perception of optimal arm size because, on stage, arms are one of the major “wow” muscles.

Unless you have God-like arm genetics, you’ll need a good amount of direct arm work if you want to compete. And even though direct arm work might not yield huge size benefits when you do plenty of pulling and pressing, every bit counts. In the long run, it’ll make a significant visual difference.

Over the past 22 years, I’ve trained a lot of competitive athletes: pros (football and hockey), Olympians, top CrossFitters, and amateurs in over 28 different sports. We rarely use direct arm work because it’s not a great investment of training volume. Despite that lack of direct arm work, their arm size has, for the most part, been proportional to the rest of their body.

In some cases, I’d use one biceps and one triceps exercise per week for certain training phases if these muscles were obvious weak links in the big compound lifts.

Always remember, your body has a limited capacity to handle training stress and grow positively from it. You should invest your training volume where it’ll give you the most bang for your buck for what you’re trying to accomplish.

This article has been retracted by the Editor-in-Chief and Publishers of the European Journal of Sport Science. 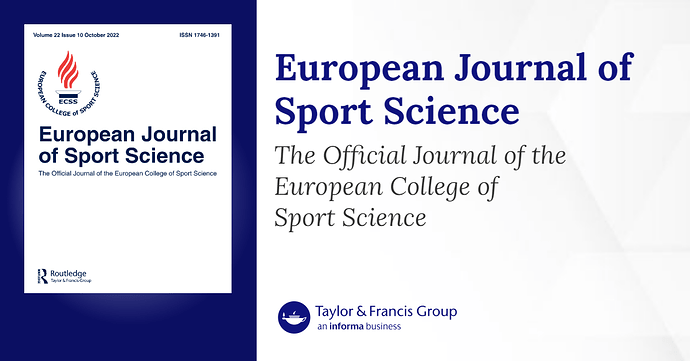 RETRACTED ARTICLE: Single joint exercises do not provide benefits in...

2 of the original investigators questioned the integrity of the data and a white paper that was published stated “Having considered the evaluation report from the external review, as well as author and institutional responses, we find the data and findings in the article to be unreliable and invalid.”

This does not discount your expertise and experience with training your clients over the years.

I did a minimalist approach for a long time, and now I do 3-6 sets/1-2 exercises tris/bis each week. This seems to put me in a perfect place recovery-wise and doesn’t leave me feeling like i’ve left something on the table. It is nice that this aligns with some of what you say here.

The way I see it is my pressing and pulling is the 95% of my arms, isolation is the 5%. If big arms are a big part of your goals, there is NO problem with that if you want to do more variations and it doesn’t get in the way of other movements you’re trying to improve on… Me though? I can listen to the bros talk about twisting their pinkies and that an incline curl is better at 30degrees, or that a tricep kickback gives them a real good squeeze, but it goes out the other ear because I’m just happy the chin-up bar is free. Maybe my arms won’t ever get to a magical amount of inch-age, but I’m okay with that.

…but who knows maybe one day I’ll do a split with an arm day. My ethos is always subject to change as my training age increases. I must add that I do feel that overhead tricep extensions DO help my strength on pushing exercises regardless of what the science says, and I do feel that the occasional couple sets of higher rep hammer curls keep my elbows healthy leading to better pushing also. Psychosomatic perhaps.

I train arms directly because it’s fun and I believe it works.

Keeping training fun is what has me working out 3-4 days a week, over 25 years later.

Keeping training fun is what has me working out 3-4 days a week, over 25 years later.

At 23 years in, maybe THIS is what I’m missing…haha

Arm-wrestlers need a lot of arm work, Greco-Roman wrestlers too.

Yes, Barbalho had a few retracted articles. This was written before he was caught modifying data

Absolutely your best article to date!

I do only 1-2 sets to failure. Supinated curl on one day, reverse curl on another day and one triceps exercie. Works well for me and gives a boost to pull up performance.

I train my arms directly because I think it’s effective and pleasant. I exercise two to three times a week because I want to keep training enjoyable.