Do Steroids Work Even if You Don't Work Out? 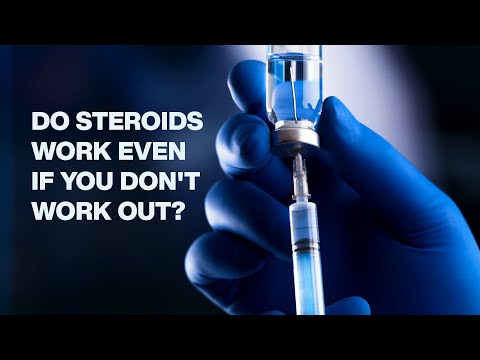 The Shocking Science of Anabolic Gains

Steroids don’t work unless you do, right? Well, sorta. Here’s what actually happens if you take anabolics but don’t lift a single dumbbell.

“A bottle of steroids has never lifted a weight!”

It’s a common refrain among users of anabolics. Basically, these guys really hate it when people assume that the drugs did all the work for them. Building muscle and getting strong takes hard work and discipline, not just a fat syringe.

But the steroids sure do help, don’t they, Mr. I’m-Just-Super-Dedicated? They’re certainly responsible for allowing you to go far, far beyond your natural genetic limits. Otherwise, you wouldn’t use them.

So, just how much do steroids help? According to studies, steroids are so powerful they can build muscle, increase strength, and trigger fat loss, even if you NEVER touch a barbell.

No way! Show me the science!

In one study, researchers recruited 43 resistance-trained men between the ages of 19 and 40 who had never taken steroids. (1)

The men were divided into four groups:

The two groups that received the real drug injected 600 mg of testosterone enanthate per week for 10 weeks. Keep in mind, for doctor-prescribed replacement therapy, men normally take 100 mg per week, sometimes up to 200 mg. Taking 600 mg per week put the participants nicely into the “steroid user” category.

The result? Then men who took testosterone and NEVER lifted a weight added 10% more muscle mass.

Of course, those who took testosterone and trained did gain more – 14% muscle mass. But a 10% gain without stepping foot into a gym? Yeah, supraphysiologic doses of testosterone can do that.

What about the placebo group who lifted weights? They added 3.5% muscle mass. Yes, that means the non-lifting group which injected T gained more muscle than the natural lifters during the 10-week study.

The no-lifting T-takers also saw measurable size gains in their triceps and quadriceps.

Do steroids make you stronger even if you don’t work out?

In the same study (1), researchers measured strength gains in all four groups.

The group that took 600 mg of testosterone per week – but did ZERO weight training – increased their squat strength by 28 pounds. Their bench press strength also increased.

Yes, the lifters in the study gained more strength (steroidal group and placebo group) but remember, those who increased their squat strength by 28 pounds did NOT do squats, or any other resistance training, during those 10 weeks.

By the way, the steroid-using participants who trained averaged an 83-pound boost in squat strength. That’s 28 pounds more than the lifting group who didn’t take the magic juice.

Do steroids help you lose fat even without training?

In a 12-week study, 7 non-athlete men in their early 20s were injected with testosterone enanthate every week. The dosage was based on bodyweight: 3mg/kg. In American, that means if the participant weighed around 180 pounds, he was injected with roughly 250 mg of special sauce per week. (2)

The result? The average participant lost 7.5 pounds of fat. Only one of the seven participants did any form of exercise during the study, leading the researchers to conclude that the anabolic steroid was responsible for the body-recomposition effects.

Do you KEEP the steroidal gains when not training?

In the fat-loss-focused study above, participants were retested after 5 months of being “clean.” Their body composition changes were almost completely reversed. They lost most of the muscle and regained the fat.

Now, had they been training, we could assume a good chunk of that steroid-built muscle could’ve been retained. This is the general experience of competitive bodybuilders: they don’t keep all of the gains made during a cycle but definitely keep some of them if they keep lifting. Even when they return to a “currently drug-free” state, they’re not exactly “natural.”

What am I supposed to do with this info?

Take steroids and don’t work out. No, no, I’m kidding.

These types of studies simply offer insight. Steroids are incredibly powerful compounds, and while they don’t lift the weights for you, they do offer a dramatic advantage… more of an advantage than most steroid users care to admit.

The drawbacks, of course, are numerous, and we should not bullshit around about them. In short, steroid users tend to die younger, usually of cardiovascular disease. For all the details, read: Steroid Side Effects: Will You Survive?

Fluid/glycogen retention may be indistinguishable from true accrual of lean tissue depending on methodology used to measure fat free mass.

Yes, if you use 500mgs of T yet have never touched a weight you might gain 15lbs and keep like 5lbs

If anabolic steroids didn’t just “work” in a manner gym pros refuse to adknowledge then they wouldn’t be used on patients who are bedridden / have wasted away.

For the case of severe wasting, study after study is indicative AAS leads to an increase in bodyweight even if you are for the most part sedentary.

Are they magic pills? No… but if the goal is to gain mass or look ‘aesthetic’ you’d be hard pressed to find a quicker shortcut provided you know how to train properly.

If they’ll cause a sedentary individual to gain some muscle tissue imagine what they’ll do to someone who trains!

If androgens made no difference men and women at baseline wouldn’t differ all that much re overall muscle mass and strength. Leverages also factor in

Even after chronic exposure to AAS/T it would appear as if satellite sells are forever altered to be more conducive towards accrual in size and increases in strength.