Will taking bioidentical supplementation of Progesterone/DHEA/Pregnenolone (in cycles) shut down HPTA?

I’m considering ditching TRT b/c I don’t want to shut down the HPTA and I would prefer to address my progesterone/DHEA deficiency which I think might fix the adrenal insufficiency and low testosterone.

Anybody have any experience in this?

I too have an adrenal insufficency with low test.
Almost 3 years on test replacement with the required Preg & DHEA pluslife style changes.
Finally starting to feel better than one good day and 4 days to recover.
Today is the 4th day of feeling good.
How did you diagnos your adrenal problem?
Dr Tim

[quote]Jugar wrote:
Will taking bioidentical supplementation of Progesterone/DHEA/Pregnenolone (in cycles) shut down HPTA?

I’m considering ditching TRT b/c I don’t want to shut down the HPTA and I would prefer to address my progesterone/DHEA deficiency which I think might fix the adrenal insufficiency and low testosterone.

Anybody have any experience in this?

Guys go onto TRT because their HPTA is broken and then shutdown does not matter. Testes will keep working if you add HCG and they are still functional.

Why do you need progesterone? It can be a problem for libido if out of balance with T. If T is low, be careful. Pregnenolone and DHEA will not be a problem. It would be silly to cycle those and TRT is not cycled at all.

Other than just consistency with symptoms, my adrenals were diagnosed as low due to the AM, PM, mid-evening and bedtime cortisol levels. There was no morning spike - virtually non existent and the afternoon levels were the highest but maybe 30-40% of normal morning highs. This is a normal cortisol output level: 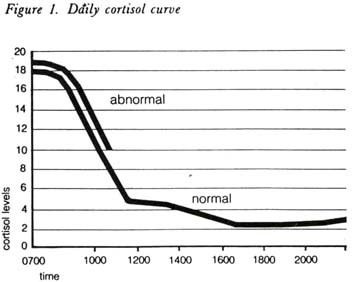 My Progesterone/DHEA levels were also low and from what I’ve read:
http://www.drlam.com/A3R_brief_in_doc_format/adrenal_fatigue.cfm#3

Progesterone produces Cortisol.
Progesterone/DHEA are pre-cursors to production of androstenedione which produces testosterone.

So, my thinking is that if the things that produce testosterone are low then maybe that is the problem. Maybe not necesarily my HPTA failing, but the compounds required by my body to produce testoserone are not in sufficient supply so it will just get by with making what it can, which would manifest in moderately low testosterone and low adrenals.

In any case, if my HPTA is shut down, then after getting my levels of Progesterone/DHEA and all pre-cursor hormones to normal levels I would expect to see no corresponding improvement in testosterone. Other than time, I’ve lost nothing.

However, if I experiment w/ TRT too soon, I may risk shutting down my HPTA - at least as far as testosterone production is concerned prematurely.

…and even then I haven’t addressed my adrenal fatigue issues which are far more life/career/school impacting than my testosterone.

I’m 27 going on 28, and granted I’m not or ever was the most virile stud out there, but what I had DID work…maybe not optimally but that might have been due to the adrenal issues and the thyroid issues which caused me to pack on some weight.

In either case, I don’t want to mess w/ TRT too early b/c that can’t be reversed as easily and I might be inadvertently shutting down my HPTA. I think in the rush to get better I might have jumped on TRT too early. I’m 5 days into it and I feel my balls soft 'n tickly…although that could be purely psychological

since I’ve got the thyroid in check, I will jump on the adrenal fatigue issue. and jump on the T issue if it still exists.

If the problem is up at the pituitary, that could be the common cause of T and adrenal issues. Any accidents or blows to the head in the last few years?

If the adrenals are weak and thyroid levels low, restoring thyroid hormones can make the adrenal problems worse.

If DHEA and pregnenolone are low, restoring these is a good idea with no downside. I did not know of the progesterone-adrenal connection.

The fact that one steriod/cholesterol based hormone leads to another does not mean that you should be thinking that supplying more upstream will have any effect on the downstream hormones. Things just do not work that way. The problem is not supply, but the control and production systems. Your thinking indicates that you are at the beginning of a long learning process. Keep reading.

As far as the pituitary goes, no serious blows in my adult life. However, looking back at my father’s life and him at 60+ now, he has had pretty much the same life symptoms as mine throughout his youth, minus perhaps the thyroid issues. In fact, in his labs, his testosterone levels were slightly higher than mine and he’s 60+.

However, he was low on the Progesterone/DHEA/Adrenal matters. I think the weak adrenals are hereditary b/c I suspect both my sisters suffer from it too.

As for the thyroid, that’s a VERY interesting observation, because when I first tested thyroid over a year ago, I didn’t know about adrenals. Once I started taking T4/T3 thyroid hormones, my symptoms appeared to go away altogether but then I started not to feel optimal again.

I could metabolize energy better and I didn’t have napping spells during the day, I got more restful sleep, intense sugar cravings for immediate energy (due to lack of energy metabolization of food) were significantly reduced, however the mental clarity WAS there shortly but kinda went away.

I don’t have an idea of how restoring thyroid hormones could make adrenal problems worse, but that might be what I’m experiencing…kind of a feedback interplay b/c maybe my weak adrenals aggravated the thyroid even worse and now restoring my thyroid hormones brought the adrenal issues to center stage.

I read that poor adrenals impede the critical thyroid conversion of T3/T4. I was taking purely T4 first and that worked shortly but then I quickly started seeing thyroid-related symptoms again and then another endo put me on T3/T4 with the rationale that sometimes people have problems w/ their T4->T3 conversion…this is what I’m still on and what seems to succesfully keep the thyroid in check. Perhaps I didn’t react to just T4 due to the adrenals not cooperating in converting to T3?

Then I stumbled across the physical/cognitive roles of testosterone and I honed in on that thinking that was my problem. I knew about adrenals but didn’t even consider that as a possibility UNTIL the doctor gave me the results of cortisol levels and told me I was adrenally fatigued.

The irony is I introduced a friend to the phenomenon of adrenal fatigue strongly suspecting he had it , but never suspecting myself. This was pretty understandable b/c that is when I started taking the T3/T4 time-relased compound and my symptoms relatively vanished for a while.

"The fact that one steriod/cholesterol based hormone leads to another does not mean that you should be thinking that supplying more upstream will have any effect on the downstream hormones. Things just do not work that way. The problem is not supply, but the control and production systems.

Your thinking indicates that you are at the beginning of a long learning process. Keep reading."

I understand that’s not necessarily the case, but if pre-cursor steroid/cholesterol hormones are deficient how could I possibly expect sufficient levels of downstream hormones?

If my pre-cursor hormones were in good supply AND I still had issues, I could safely consider control/production systems…maybe all that’s happening right now is that the deficient upstream hormones are causing rationing downstream leading to a graceful degraded output/functionality.

I can’t possibly know that until I get my upstream pre-cursor hormones out of deficiency and see what it does downstream.

The best-case scenario is my adrenal clears up and my testosterone enters normal levels due to robust thyroid/adrenals.

If that doesn’t happen…it’s back to the drawing board. But I think it’s a reasonable strategy to get adrenals in order and then see what normal pre-cursor hormones do to my testosterone.

I’d rather not touch the HPTA function w/ TRT until that’s the only problem I’m looking at.

The nice thing about testosterone is that it can still register low when adrenals are in good working order so I have a method to test if my HPTA is causing inadequate testosterone production when-and-if my adrenals clear up.

Sorry for the absence.
But what you said sounds good to me.
dr.Tim