I’m sure we will hear a hue and cry in the press of fascism and suppression of free speech rights concerning the Dems decision to wall off protestors from their convention, right? 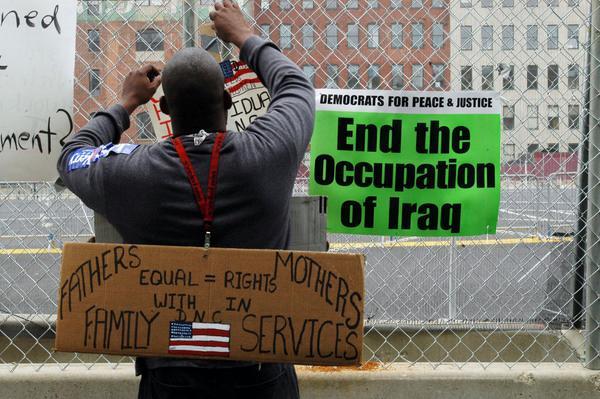 DNC protests will be behind fence

DNC protests will be behind fence

[i]DNC protests will be behind fence

The fence around the public demonstration zone outside the Democratic National Convention will be chicken wire or chain link, authorities revealed in U.S. District Court today.

That may allow protestors to be seen and heard by delegates going in and out of the Pepsi Center during the convention.

But the American Civil Liberties Union and several advocacy groups have filed an amended complaint to their lawsuit against the U.S. Secret Service and the city and county of Denver that says protestors and demonstrators may have their First Amendment rights violated by security restrictions.

The ACLU has said it wants to avoid the conditions that existed during the 2004 convention in Boston, where protesters were caged, infuriating First Amendment advocates.

The first phase of the lawsuit asked the court to compel the city and the Secret Service to disclose the information on protest restrictions.

During today’s hearing before Judge Marcia S. Krieger, the attorney for the groups, Steve Zansberg, said the city and the Secret Service had provided the information sought in Phase One.

The second phase of the lawsuit will address whether the restrictions are unconstitutional. Zansberg also represents The Denver Post on First Amendment issues, though the paper is not a party in this dispute.

The groups agreed to go to trial on those issues on July 29 and the judge will visit the site the night before to assess the restrictions.

[quote]BostonBarrister wrote:
I’m sure we will hear a hue and cry in the press of fascism and suppression of free speech rights concerning the Dems decision to wall off protestors from their convention, right?
…[/quote]

Of course we will, the media always treats these issues fairly for both parties.