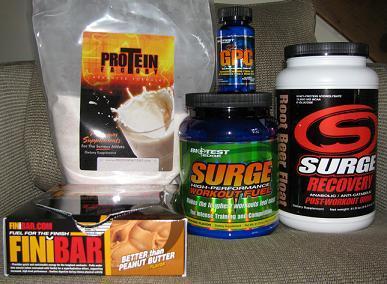 Protocol I will be using:

im doing the almost the same protocol as you, but im doing 1 Surge Recovery + 24g of peptopro during workout. I thought this was advised. can anyone tell us which is recomended

[quote]bwbski wrote:
im doing the almost the same protocol as you, but im doing 1 Surge Recovery + 24g of peptopro during workout. I thought this was advised. can anyone tell us which is recomended[/quote]

From reading the threads, and my notes I kept on the variations, using SR during the workout was if you didn’t have CH (peptopro/anaconda/mag10 protein), the variations that had CH usually had just that, or that and SWF.

A question for you - where did you get the 24g from? Everything I’ve read has it at 20g.

I’m also changing what I am doing already, the creatine is going in during the workout, instead of before. It’s just a little easier for me since I will have to be lugging everything to work and am already going to be bringing 3 different bottles. I doubt that variation will have much of a difference.

24g is a full scoop of what im using

My mind is blown this thread is still up…

Since the pre is taken care of with this, and a little bit of the post is as well, I don’t have to have the other food to get. I figure changing from what I normally do to this ends up being about $8 or so. Still pretty pricey. We’ll see how it goes.

And how many calories or protein in this paraworkout protocol?

Wow that’s a lot of water to take down. Bit of a pain. First workout done. No crazy pumps or strength increases, although through my whole workout I was pretty much ready to go, no real decline in performance throughout. We’ll see how sore I am tomorrow and how that workout goes.

Still no crazy strength gains, although repping out felt easier. Soreness was almost non-existant from yesterday’s workout. Today’s and how I feel tomorrow will be the test since I really beat on my lower body.

I actually think I might be overtrained a bit from my last cycle and maxing out at the end of it, that might be masking a bit of the effect.

Just so you know, I’m interested in this protocol and will be checking this thread periodically for your results. So don’t hesitate to post in it thinking it’s a waste of time.

[quote]Otep wrote:
Just so you know, I’m interested in this protocol and will be checking this thread periodically for your results. So don’t hesitate to post in it thinking it’s a waste of time.[/quote]

Thanks for letting me know. I was getting a bit disheartened by the apparent lack of interest on it. I’ll try to keep up a few posts a week.

Well, turns out it didn’t save my legs from being sore - they were killer for a couple days afterwards. Of course, this was the first time in awhile I trained them that hard so some DOMS was to be expected.

Day 3 went well, one interesting thing was my first set of pull ups, I got to about 10 and thought I might be able to squeek one more out. Well I did one more rep, so I thought I’d try for another - then another - then another, ended up doing 14 or 15, which is more typical of if I would have been doing them first in the workout, not partially through it.

Day 4 finally went pretty good, not sure if it was the protocol or what, but I worked up in Squats to close to my max for a set of 4. I was feeling pretty dead at the end of the workout, and as of now there isn’t a whole lot of soreness, of course DOMS usually peaks 24-36 hours after the workout, so I’ll be finding out for sure over the next part of the day.

Just a side note, it also seems my arms are a lot more vascular than usual, almost to the point of being freaky-looking.

Weight and girth measurements up, and ab skinfold down. Weight up 7lbs is a bit ridiculous. My last two meals yesterday were out to eat, so maybe I am dealing with a bit of sodium overload/water retention. Another thought is on this protocol I am taking 10g creatine instead of my usual 5g so I might be holding some more water there. Potentially it could be muscle, but I can’t believe that is the case…we’ll see what next week brings.

I’ll be reading too…

I’ll be reading too, please keep your thread updated.

I’m starting mine this week! Keep us posted…

i got a question. why no L-Leucine? from my understanding of Thibs threads, L-Leucine was the magic that allowed Anaconda to work. i do suppose Surge Workout Fuel and Surge Recovery have L-Leucine in it anyways

For me, the protocol blows. Drinking all that pre workout doesn’t sit well with me and if I do half way through my workout I’m wanting to hurl right there in the squat rack.