Deep Ache in the Mid-Back (Erectors)

Has anyone ever experienced a deep ache in the middle back? One of my friend kept trying to crack my back when it wouldn’t. The ache is constantly there when I’m standing or sitting. It only feels a little better when I’m just laying flat.

The deep ache feel like its coming from the spinal erectors. i have noticed when I try to sit straight, the pain gets worse, however leaning against a chair would not be as bad. Also, i have notice when i tried doing a butterfly stretch and straightening out my back, the spinal erector muscles where i have the ache cramps up.

I have had this for about 9 months now. i got an x ray, but it showed nothing. The doctor wanted to get a mri, but i was wonder if there is any other options. I also went to a chiro and had a deep tissue massage a few times, but the pain only subsided temporary.

Has anyone else experience this? i would like to recover without having to pay for maybe a unnecessary mri and get back to working out. 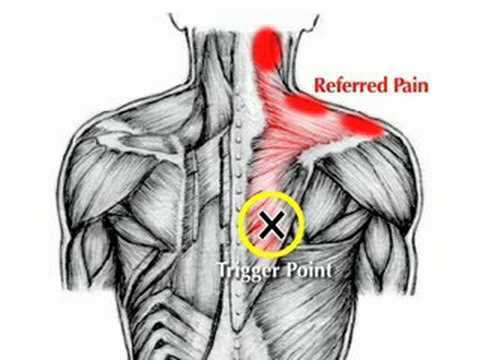 Do you know how long it will take to get better? I have been doing some foam rolling and tennis balls(in a sock) for some time now and still has not gotten better.

I also think my pain is the bottom of the lower trap if that makes a difference.

[quote]KLi wrote:
Do you know how long it will take to get better? I have been doing some foam rolling and tennis balls(in a sock) for some time now and still has not gotten better.

I also think my pain is the bottom of the lower trap if that makes a difference.

Thanks man.
[/quote]
It took me 3-4 weeks of 2x massage a week at a physio and the pain was gone
I would say contact a physio and if it’s a good one, it wil ltake 2-4 weeks for pain total pain relief

thank you man. Are there any stretches or strengthening exercises you recommend?

I had a similar issue for a while. Proper pt exercises help, think glute activation, planks, dead bugs, a lot of stability stuff. Then you need to strengthening your entire back and core with heavy lifts(deadlifts are king). Some people have thyroid issues and do well with supplementation to help out with low free t3 levels. For the most part you need to build your endurance up in the positions that are painful, stop avoiding them, practice good posture all day, stand a lot. Don’t spend long periods laying down during the day, same with sitting, make sure your up and moving.

It may be costovertebral or z-joint dysfunction from poor posture. Restoring proper motion then restoring local stability is the way to go.

Just out of curiosity - If it all stems from poor posture, how come it has not affected me until the injury?

Also, bpbob do you recommend going to PT or can i just focus on those excerices and i will be good? Because i am getting a little confused if it is either a muscle deficiency or trigger points which would make my muscle fatigue. People have been telling me different things.