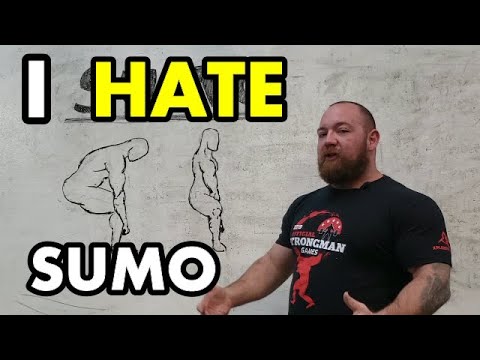 Okay, I’m not watching a 20 minute video on why people hate sumo.

I don’t actually hate sumo, but it is ridiculous to compare it to conventional deadlift when you have people built like orangutans that can lock out below their knees.

Sumo is inferior to conventional on both accounts.

Is that the same joker that said Texas Power bars were no good?

Are we really trusting this guys judgement?

Watched Pete Rubbish and Chance Mitchell talk about sumo the other day, they agree: sumo is easier as long as you don’t have f’d up leverages because of shorter ROM and involvement of quads instead of erectors, quads being bigger and stronger, allowing more work and recovery as well (and Chance has a 383 kilos sumo pull).

Display of strength or physical development.

Sumo is inferior to conventional on both accounts.

I think on the physical development side of things an incorrect assumption is being made here. That is that the same weight is being used. I didn’t actually watch the video, maybe this was addressed?

I’ve heard this argument for narrow Olympic weightlifting training squats versus wide stance low bar squats often used by powerlifters. The “powerlifting” style can be great for development too, it just requires more weight to be lifted. I think @RT_Nomad discussed this in his mega thread about his experience switching to wide stance squats.

Fwiw, I do both styles of deadlift.

One lift can’t be as good as two lifts!