Deadlift Power Off the Floor

Been struggling with my deadlifts for a month or two, have been unable to pull heavier weights from a dead stop from the floor, started using the “roll towards you” method (where you roll the bar towards you and then pull) and I would really like the be able to pull better from dead stop, ive started incorporating more deficit pulls, speed pulls with chains, and pauses directly off the floor to my workouts but I still feel like I cant get the same amount of power, could be a problem with tightness, lat engagement, or something else form related. Anyone else have this problem and have any tips on what helped them?

Do your hips start shoot up as the weight gets heavier?

Not really, Occasionally when I dont think through my cues but 99% of the time my hips are good

What’s wrong with rolling the bar before you pull? As long as it doesn’t throw you off and you consistently pull from the same spot then it’s fine.

If you can do SLDLs without rounding your back then those are good to build strength off the floor on top of deficit DLs. Build up your quads too.

There’s zero reason to roll the bar before you pull. You’re not Eddie Hall. The difference is Eddie Hall is a 1000lb dead lifter. You shouldnt be rolling the bar for anything under 500lbs. Work on your posterior chain , and cues.

First of all I’m not the one rolling the bar.

You shouldnt be rolling the bar for anything under 500lbs.

What kind of stupid advice is that? Why does rolling the bar become acceptable at some arbitrary number?

Majority of powerlifters who have been in the game long enough dont roll the bar when they dead lift. rolling is such a crutch maneuver that in itself can cause form breakdown and ruin brace. I never seen a person in a gym rollout a deadlift without having their hips shoot right up with a rounded back… The point of rolling the bar is to get momentum off the floor or thats how the placebo is supposed to work. You know what helps get the bar off the ground? PULLING THE SLACK OUT THE BAR, bracing hard and having strong fucking posterior chain, hamstrings and back

And the number arent arbitrary. Dont tell me with a straight face rolling a deadlifting with 2,3, or 4 plates doesnt look dumb af.

I also have understood that there is not any real benefit for rolling the bar. I do see good pullers doing that though. I sometimes do it too, it kind of makes it easier mentally, I think?

But I would not say that there is some secret number what you need to pull to be allowed to roll be bar. I would not certainly teach it to a beginner, but if someone likes to pull in that way, what does it matter?

I would not certainly teach it to a beginner, but if someone likes to pull in that way, what does it matter?

Exactly, unless you can’t consistently pull the same way it doesn’t matter.

And the number arent arbitrary. Dont tell me with a straight face rolling a deadlifting with 2,3, or 4 plates doesnt look dumb af.

Why does less weight on the bar make it look dumb? I think that making nonsense claims such as

You shouldnt be rolling the bar for anything under 500lbs.

makes you look dumb as fuck. Rolling the bar is not necessary, but unless it causes problems it isn’t a problem.

there is a reason why most coaches even on an elite level dont teach or encourage rolling the bar like a strongman and using it as a cue. You dont even see it in exercise science books. It’s a technique that people picked up from elite level pullers and most of the time it’s not even executed in a way where it maintain good form. What good is getting the weight off the floor if your back immediately begins to cave in and you lack hamstring and hip strength? THATS WHY PEOPLE DO IT IN THE FIRT PLACE TO COMPENSATE.

I though Eddie hall and co roll the bar because they can get in a better position because their bulk inhibits them getting there. Plenty of larger lifters don’t roll too so I guess it’s all good. Like Chris was saying nothing wrong with rolling if you are consistent with it

A vid would be really helpful. Speed off the ground can be inhibited if your technique is inefficient like hips shooting up or having the bar too far back or forward of mid foot

I definitely disagree with rolling, it just seems like deadlifting with extra steps. However, if it feels more comfortable then stick with it. I wouldn’t teach it to yourself if it’s not in your normal cues though. (I just dont see why slowly rolling the bar to you horizontally and then aggressively pulling vertically would apply any more force)

Also, just a small bit of personal experience, I typically do better when I focus on 1 variation at a time. I’ll do deficit deadlift for several weeks, then paused for several weeks, and I’ll track those numbers as if they were the main core lift. If I get too caught up in multiple variations I start spinning my wheels.

Thank you to those who gave answers to me wanting to STOP rolling the bar (and to the ones who were speaking about cat-backing I have never had a problem with rounded back) and my deadlift max is 465-485 for those wondering (dont know exactly never really do 1rm too often). I also should add that the only time I do roll the bar is on my top set.

Will begin working on defecits and continue strengthening my posterior chain.

The only reason I really think I began rolling (didnt do it conciously) is to get myself into a tighter position.

You can roll or you can not roll but choose one and stick to it. Doing deadlifts one way for most of your sets and another way for your final set is a good way to stuff your own progress.

You wouldn’t even think about doing something similar with other lifts.

Why are you getting so worked up over this?

Bar has momentum towards you, so the deadlift will be close (touching) to your body for a few inches of the pull. I think smaller lifters can get right next to the bar, but the strongman competitors (very large) have a hard time getting the bar right up to their shins (hence the roll).

The momentum from the roll should lower the load on the lats in the beginning of the pull.

I don’t think there is any benefit in the vertical direction. 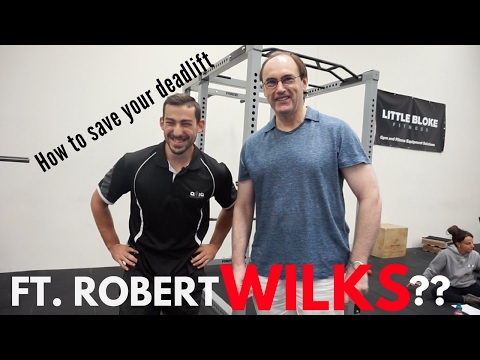 I was gonna say.

I think this is better cue than rolling the bar:

not getting worked up. you asked the questions and I answered