I really need help with my deadlift it is really starting to suck. I’m peaking right now and I feel like
Every week deadlifts are getting harder. 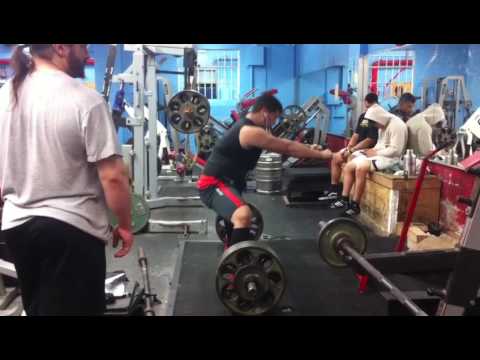 You said you’re peaking, are you doing a meet soon? If so, how soon? Do you have another video angle for your deadlift? Looking at it right now, make sure you’re breathing into your gut and pushing against your belt. Your hips look to be in a pretty good position, get your shoulders back behind the bar more if you can. How often are you deadlifting? There are questions that need answers before I, or anyone else on this forum, will be able to adequately help

We’re going to need a little more detail to provide any meaningful advice.

I’m peaking right now and I feel like every week deadlifts are getting harder.

What does this mean? Do you mean that the same weight this week feels harder than it did last week? Or do you mean that as your training ramps up to include more near-maximal attempts, they’re getting harder? I find that there’s somewhat of an “exponential” increase in how hard my DL’s feel as I approach my max…60 percent feels like there’s no weight on the bar, 70 percent still feels pretty easy, 80 percent gets to “Pay attention” time, and 90 percent or more feels like it’s always going to be a grind. So we need a little more detail beyond “deadlifts are getting harder” - what have your workouts been for the last four or five weeks?

Likewise, there is no way for us to know this. Are you trying to hit a record in your age group, or a qualifying total of some kind (states, nationals, etc)? If not, then I don’t see any point in cutting to make a specific weight class - I think most people should just lift at whatever weight they feel good walking around at, and save the weight-cutting for when they’re good enough that it will matter (remember, powerlifting is a very fringe sport, so unless you’re hitting a qualifying total or setting a record, the weight class you’re lifting in is almost 100% irrelevant). If you are still thinking about cutting weight, the only way any of us can help decide if you “should” cut from 242 to 220 is to have some understanding of what you weigh “walking around” right now, how much of that is spare poundage (fat) that you could trim easily, etc. If you’re a bloated or soft 242 that could shed the first 10 pounds from cutting out soda for a month, then yeah, maybe going to 220 is a good move.

5.5 weeks out and I deadlift once a week

I’m pretty fat and want to cut down to 220 because I’d be leaner and more competitive in that weight class.

It sounds like you are getting fatigued. Do you deload at all, or have lower stress weeks?

I’m pretty fat and want to cut down to 220 because I’d be leaner and more competitive in that weight class.

Do that after the meet.

That’s a noticeable increase in load, so very normal for it to feel harder.

Absolutely do not cut that much weight so close to your meet. Your strength will tank if you do.

As the others have said, don’t bother with the weight cut unless you could set a record or qualify for something at the lower weight class, it serves little purpose and would likely weaken you.

15 lbs. is a fairly appreciable jump when talking about working sets so it’s possible that just a touch of fatigue is mixing with that and making for hard sets. As was also mentioned before, do you have a deload programmed in? With 5ish weeks left til the meet, you could easily plan a small deload of 3-5 days of light activity and then jump into a heavy ramp up leading into the meet.

Just for the sake of argument, going from 410 to 425 is a 15lbs. jump which adds up to 3.65%. That should equal about a 1RPE difference in difficulty. 1RPE is a quantifiable difference, but not something I would consider significantly harder. If there is no unusual outside stress in the past week then either it’s just a bad day (and not even that bad of a day since he got the work done) or fatigue is accumulating.

My prior coach used to tell me (admittedly a stolen quote):

I love the quote, cause some days the shit just feels heavy other days you feel like you’re strong has hell. So based on that, I try not to get too caught up in how I feel any particular day and look at my videos and listen to my coaches about increasing poundages. Generally speaking, my coaches tend the load the bar more heavily than I think I’m ready for.

As far as a cut is concerned, pretty much what others have said. If you are a sloppy 242, cut the weight post-meet with a modest calorie deficit.

A friend of mine was a junior canadian powerlifting world record @275. He loved being strong, but eventually got tired of just being big and sloppy-looking and wanted his body to look as impressive as his numbers. So he now is around 220 with a lot of definition. Feels better about himself, even though he gave up a lot on bench and some on the other lifts. Probably a lot healthier too, in terms of lipid profile and other blood markers.

So for one or two weeks a heavier weight feels heavy and you’re ready to change your complete game plan? Honestly, do your meet, then forget about powerlifting for a long time. Train in a more general sense and enjoy being a teenager.