would love some feedback to keep working this sumo form. 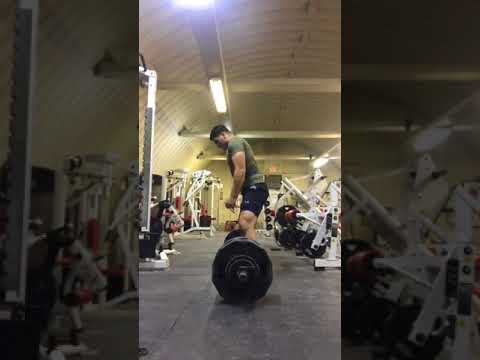 I suck at getting the videos to embed. don’t know how facepalm

I suck at getting the videos to embed. don’t know how facepalm

ahhhhhhhhh I see. much obliged for the challenged.

It looks OK from what I can see at this angle, only thing I notice is that it looks like you are struggling not to round. Work on bracing and strengthen your back, I would personally recommend heavy barbell rows.

Other than that, are you wearing one of those tapered weightlifting belts? If so, get a proper PL belt, those kind of belts don’t give you much to brace your abs against and are only really useful to keep your from hyperextending your back.

yeah it’s like $30 from dicks from like years ago. I really don’t know which belt to buy, pioneer/SBD and what type (width?) and I didn’t wanna spend hundreds of bucks without getting to try it all. specifically cause i’m in japan.

will adjust and put some rows in. thanks for the feed back!!

is there a ‘better’ angle to take a video from that would give you a better view or is from the side good to go?

There are some Japanese brands, I can’t remember the names but I saw them on the IPF approved list (not that I’m promoting IPF or anything). Check them out, otherwise I would go with Inzer or Pioneer.

It depends what exactly you are looking for, I mostly record my sets diagonally from the back. Otherwise from the front, but if you have back rounding issues then you won’t see anything that way. You could record a couple sets from both angles if you’re not sure about other stuff like your knee position and such.

got it.
next time I deadlift I’ll take a few shots of my heavy sets and post back.

also: thanks for the suggestions on the belt. I just can’t decide between 10 or 13 and i’m not trying to make 100+ dollar mistake. lol

ordered a 13MM. I just read somewhere that some people don’t like em on deads.

went prong not lever as well.

I just read somewhere that some people don’t like em on deads.

Yuri Belkin, Konstantin Konstantinovs, and the one in a thousand lifters who pulls with a 2mm.

lmao, point taken. thanks for the continuous help, my friend.

Russell Orhii just published a video where he is considering to back down from a 13mm SBD to a 10mm Inzer for deads. According to him, the 13mm makes it slightly more difficult to get into position. I also don’t see why not 13mm, but everyone everyone is different. If you can, try before you buy.

I also don’t like a 13mm for deadlifting for the same reason. I used to use a soft belt until my final set but that has other issues so I just throw it on after 60% or so and suck it up.

the 13nm belt I bought was only $80ish bucks from elitefts. if it’s too stiff for dead’s or whatever, so be it, i’ll buy a 10 later. i’ve been using just like a generic taper belt so i’m sure i’ll be happy regardless.