Primarily how should I go about fixing my sticking point in the dead lift?

Any other thing you guys may notice as well. 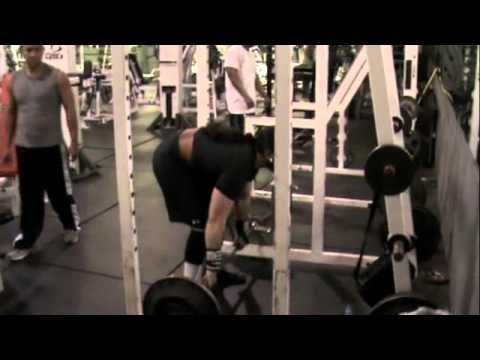 Look at your setup at 20,23, and 37sec. Some things to point out is your setup is too soft at the start. I think you might benefit from spreading your feet slightly wider and getting that butt down from the get go. Arch that back hard and keep your chest up. Unless you are to a point where you can fix your first pull then I don’t think you should be bouncing your deadlifts either. I never bounce mine although I have heard some pretty good arguments for bouncing for those that have weaker lockouts. If you plan to stick with lifting for some years you might also check out a better belt that can benefit you more. Because of how the video is arranged it is tough to tell a whole lot in terms of timing of reps, sets, weight etc. but it looks as though you are losing your form because you are going balls out after you are already tired from previous sets.

Don’t jerk the weight like that, if it’s too heavy there is no shame in dropping it, Also don’t slide the weight on your thighs on the descent, you might hit your kneecaps(it hurts like hell), focus on pushing your hips back first and only bend your legs when the bar reaches the knee level.

Don’t hyperextend the back on the end of the moviment, it’s bad as lifting with a round back.

I really don’t like the touch and go setup, it makes your form go to hell after a few reps.

My advice man is to lower the weight a bit and really focus on using the legs to get the weight up. Like someone said above, squat down and drive through your heels up . I think you’re deadlifting with too much back pull and not enough leg drive. Yes there is both obviously, but especially in that last heavy set, you’re doing nearly a straight leg deadlift meaning your hips came up way too soon and you’re just pulling the bar. Your back also rounds out at this point.

This is something I did for a long time before realizing the importance of the legs, even the quads. I had to take a few steps back, but then have made leaps and bounds going forward by focusing on involving the legs more.

Agreed with JSmiley. Those three set ups are soft, back and shoulders rounded. Your first set’s not bad.

The bent rows look look like it is mostly your arms pulling, there is no retraction of your shoulderblades. Think of pinching a quarter between them or spreading your chest. Two options, lower the weight on the rows and work on the form, or if you’re really married to using heavier weight, some dudes throw their chest at the bar.

If you are using rows as a lat exercise, you need to focus on pulling back and down. You are pulling straight to your chest, which will hit the retractors fine but won’t really target the lats. Think about tracking the bar along your quads and toward the crease of your hip (without resting the bar, obviously). And wherever the bar is touching you, probably the lower abdomen, touch every time. You need to have a consistent point to touch so you don’t cheat the tough reps, which is exactly what you were doing.