Most authors generally agree that each chin up rep should be preceded by a short pause, or dead hang, at the bottom of each rep to train in the most athletic style. Using this technique is a lot harder than pumping out reps fast by using the stretch reflex, and the benefits seem to reflect that.

Since each individual rep is harder, perhaps it’s better for hypertrophy as well. So I’m curious how the people here train.

Pause at the bottom of each rep or use stretch reflex for the next rep?

PS While this guy is strong, I wouldn’t classify these pull ups as dead hang. 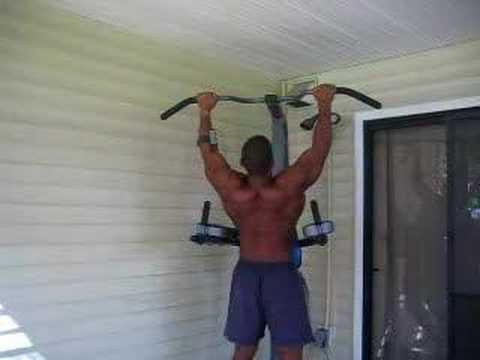 The heavier I get the harder dead-hangs are on my rotators.

On the other hand these would not be dead hang pull ups:

I just started to do every rep dead hang. Definately much harder, and better IMO.

When doing weighted pullups, i often will perform reps as singles, that way i can reset my grip, start from a hang with no swinging, and pull like crazy.

I have a buddy who screams “you’re only cheating yourself!” when I don’t come to a dead hang on my chins. Now, I always come to a dead hang for my first few sets, picking up the speed a little for the last 1-2 sets in order to ensure I get the reps I need for that day.

As long as I explode on the concentric, control the negative a little, and can add weight the next workout, I don’t really care, though. It hasn’t hurt my numbers, any. 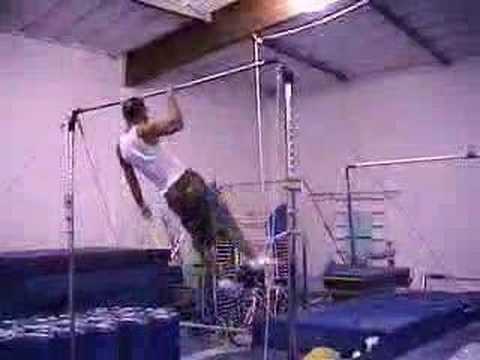 not kipping one arm chins…

While I see the point of begining a chin from a motionless start (negatting any swinging, cheating, momentum), personally I come to an ALMOST hang, reasoning that I’m keeping continuous tension on my back. I also don’t throw my jaw over the bar, instead keeping the stress on my back, and avoiding the bicep squeeze most kids gets in their versions. (SO far, I think my back looks pretty cool -lol)

I go down slowly to a dead hang on my pull ups (slightly assisited).

While the first guy might not be hanging motionless at the bottom of each rep, he is far better than 90% of those who I see at my gym.

IMHO, the video of the kipping group is more gymnastics than pull-ups. But, hey, whatever floats your boat.

The guy doing the slow one arm chins has been out for a while and is a good example of strength and control.

[quote]anonym wrote:
I have a buddy who screams “you’re only cheating yourself!” when I don’t come to a dead hang on my chins. Now, I always come to a dead hang for my first few sets, picking up the speed a little for the last 1-2 sets in order to ensure I get the reps I need for that day.[/quote]

Heh, yea this is what I’ve been doing lately. I’ll start off with weighted dead hang chins, and then use stretch reflex to get enough reps in subsequent sets.

And here’s my 1RM for fun

Amanda, have you checked out this article?
http://www.musclewithattitude.com/readArticle.do?id=2021697

Considering most guys can’t do a proper pull up, I’m always impressed when the ladies demonstrate such strength.

I can’t do a dead hang, it kills my shoulders.

dead hang to partial dead hang is where i stay. the heavier it gets obviously it gets much much harder to keep that form as well as keep tension in my back and not recruit too much of the biceps.

has anyone read Poliquin’s latest question of strength where he recommends using a tree climbing belt w/ a chain 4 heavy pull ups/chins? says it evenly distributes the weight unlike the other weighted dip belts in the gym. anyone used em? thinking about buying one…

Not doing chins from a dead hang, in my mind, is like doing the partial-rep bench press that Ronnie, Branch, and many other big-chested bodybuilders do. In both cases you’re doing the hardest portion of the lift and while you’re not doing what’s best for strength gains do have the advantage of getting in a few more heavy reps than you could with full R.O.M.
I think an argument could be made that this is better for muscle growth.

Not doing squats to lock-out is a different matter altogether. I’m not talking about doing Quarter squats or Half squats. I’m talking about putting a modest amount of weight on the bar and doing from ATG to a Quarter Squat without ever locking out your knees until the end of the set. This is a killer way to squat since your legs never get a chance to rest. Again, good for muscle growth but not for strength gains.

I’ve seen this done for bench and I know many have done it for curls, but maybe you could do chins using the 21-rep scheme of 7 low-end partials, 7-high-end partials, and 7 whatever your full R.O.M. is pull-ups.

But if you can do full R.O.M, why not use the full ROM?

It’s wrong on so many levels to assume that only from a dead hang you can bang out a valid repetition.
It’s almost like making a moralic statement on “the right way” to train.
The most fundamental principle here is not “max ROM without momentum is everything” but “train for a goal”.
If continous dead hang chins are good for your aim, fine. If not, feel free to kip, cheat & wiggle.

For lat hypertrophy, I’m pretty sure that heavy ass chins -or narrow pullovers, depends on body type- with a reasonable ROM, like 140Â°, are enough (read: better).

Dead hang chins is one thing. Dead hang wide grip pullups is a whole new beast altogether. The latter is what’s so hard on my shoulders.

i do dead hang wide-grips right now. with a slowish steady negative. if i just drop, it kills my shoulders.

i read somewhere (maybe here) that looking straight up at the ceiling while doing them targets the back better.

not kipping one arm chins…

Much better video (make sure to have it on mute):