At the Kern US Open Dan Bell Broke Vlad Alhazov’s 500kg record with a 505kg Raw squat with wraps. 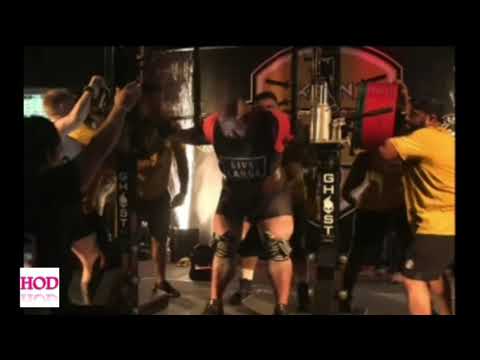 He looked very concerned with that rack. That spotter was probably crossing everything he could cross haha

This was badass, thank you for posting.

Looked at the video he missed the rack on his left side racking it.

Question. Why did the 500kg & 501kg dead lift gain so much public traction - but this does not? This is equally - arguably more impressive. Not only as it’s heavier but the squat is a harder movement (in my eyes any way).

Wraps and monolifts tend to turn off a lot of casual viewers, whereas the deadlift is able to appeal to a larger audience, to say nothing of the depth clown car. As iconic as the squat is for powerlifting, it’s the most damaging lift as far as being a spectator sport.

Which doesn’t at all detract from how absolutely bonkers this is.

Fair point. Its the only which you look at and has the most “going one” with regards to the wraps, monolift and stuff. And the depth issue also.

Also thinking about it - Eddie and Thor also “transcend” the sport. Thor is in GoT and Eddie is a shameless self promoter (not digging at the guy it just a fact). So they are much more in the public eye. Before this thread I’d never head of Daniel Bell. So you’re average Joe is never going to know him. Which is a shame.

I think another reason this gets no hype is because 500 kg on squat was passed a long time ago… in geared lifting. So when you have to start adding all these qualifiers (depth, suits, wraps, mono, etc…) to try to equate it to a deadlift, it just makes it so much less tangible for the general public.

That, and the average gym goer is much more likely to see a big “squat” than a big deadlift… meaning… they are much more likely to see some jack-off walk out 800 lbs and bob up and down a bit with it than see a guy pick up an 800 lb barbell. The vast majority of people don’t really understand the differences. Hell, there are high level powerlifters who cut 900+ lb squats 6 inches high and still can’t comprehend that not only did they not hit depth, but they would get absolutely buried by that weight if they did.

Point being… short of a soft lockout, you just can’t fake a deadlift as easy.

That is a fair point. I’ve seen a few guys love the squat but avoid the deadlift. I’ve assumed this was the reason. I’ve never thought about putting that in to this context.

When you see threads by beginners were their squat is like 100 lbs more than their deadlift, you can make a safe bet they are not hitting depth.

I do know some high level guys who squat more, but it usually isn’t 100 lbs, and they usually complain about sucking at the deadlift because of their build.

Point being… short of a soft lockout, you just can’t fake a deadlift as easy.

On sort of a side note, this is one of the reasons I’ve become more interested in weightlifting (Olympic style) recently. You can’t really cheat on the snatch or clean & jerk; either you did the lift or you didn’t. And though the squat is an assistance for weightlifting rather than an event, weightlifters put up some amazing squat numbers, and virtually all of them are hip-crease-below-the-knee or deeper.