Im just curious about your toughts. Should i put tren ace in the beginning or at the end of my cycle? I had run test and tren before, but never touched dbol. Goal is bulking. The only legit test i can get my hands on is sustanon 250.

Should I put tren in the first 8 weeks or the last 8? Why?

Also for this cycle how much mgs of tamoxifen should I use for preventing gyno cuz of dbol? Im not prone to it, but better safe than sorry. (Or Arimidex)

Thanks for the insight.

Tren is a very versatile compound that can theoretically be used for bulking or cutting. It’s dose dependent at the rate of which it may stimulate you’re metabolism though. I assume you’re aware of the many risks involved with Tren (and AAS in general). Using 600mg test 25mg dbol 300mg tren is roughly the equiv of 2350mg test/wk in terms of anabolic potency.

You can put it within the front or back end of the cycle depending on you’re goals. If vanity/peaking for a certain event is within you’re repertoire for this blast, using tren for this event seems sensible I guess (if you’re using it anyway that is)… but don’t drink or use rec drugs on tren, even if on vacation or something… recreational drugs on trenbolone is a RETARDED idea. The neurological impact of tren alone, the numerous issues with systemic toxicity building up over time etc… you’d have too be seriously irresponsible to dabble in anything other than say… PERHAPS cannabis… and even then, the inhalation of carcinogens may be of detriment within the long run (and cannabis has pro-arrythmiac effects within itself).

Tren and dbol are wonderful together. If I were running this cycle, I would run the test alone for the first 2 weeks, then dbol and tren a added in for weeks 3-8. Test only last 4 weeks. Be ready to eat on tren. You may not feel like eating but its crucial for a bulk, which is what I’m guessing you are going for…

Dbol kills my appetite, whether it be due to increased dopamine synthesis or systemic toxicity I do not know… but I know it fucks over my appetite big time

I personally feel that tren is highly inefficient as a bulking compound. In my experience, I have noticed a huge increase in nutrient partioning effects from tren as I have increased the dose. At 1g of tren, your body literally becomes a black hole. Your body burns through everything at an accelerated rate.

I went to a sushi buffet last night for my birthday. After an hour of intense sushi eating, my stomach still felt like nothing had hit it. No bloating, nothing. About an hour after I finished, it was like I was ready for another meal.

9 out of 10 guys will not out eat tren. Those that do, tend to be hitting the Mac Donald’s and pizza palours every day in order to get in enough calories. But that in itself is going to hammer your health and even then, it’s still a big IF, if you will put on any significant mass.

Tren is just not that great of a bulker. I use tren to squeeze into a weight class while building strength. It certainly hasent allowed me to put significant amounts of size. Sure, I have packed mass, but I certainly haven’t ‘exploded’.

If you are really interested in bulking and putting on significant mass then: test, test * deca, test * deca * dbol, test * dbol are going to be far better combinations than tren.

Once again though, perhaps this is doss dependent. 300mg is a far cry away from 1g. Then again I’ve never used Tren, and never will as there is no need for me to use something so absurdly potent.

And in terms of bulking, what exactly are we looking for? You say you’ve packed on lean mass, isn’t that bettee than putting on a ton of muscle + fat regardless?

Also, I’ve said this time and time again, there are many compounds out there that will allow one to squeeze into a weight class. Tren just happens to be (probably) the second strongest of them all… the strongest anecdotally appears to be halotestin (theoretically you’d get stronger on halo than you would on Tren, but due to its effects on the RAAS system + extensive 11-hsd inhibition you’d better watch out for high blood pressure!!!

Also… once again… happppppppyyyyyyyyyyy bbbbiiiiirrrrtttthhhhddddaaaaaaaaaayyyyyy, I had sushi yesterday… it was potentially the worst, least fresh sushi I’ve ever had… I think my intestines are paying a decent price today

Tren o Hearn seems to be able to out eat his Tren. However it does appear Tren is typically involved within cutting cycles or recomp… you don’t see guys anecdotally running Tren when trying to pack on as much mass at the fastest rate possible

But I’d stipulate the gains from

Would be a hell of a lot cleaner than

Tren is just not that great of a bulker

I love tren for bulking I would never use it for a cut. I can accomplish everything I want with a cut on test/mast, test/proviron.

I personally have no issues out eating tren and keeping diet fairly clean. I do have to add in some homemade shakes that are around 700-1000 calories 1-2 times a day. But even those are clean carbs milk and protein with low fat.

At the end of the day regardless of nutrion partitioning or how high of a dose basic science still applies. Calories in vs calories out. If you are in a surplus you will gain.

Buuuut Trenbolone does appear to have directly thermogenic properties and increase basal metabolic rate… some may be more sensitive to this effect than others. So I suppose (perhaps) it’s genetic

We have very little research on Tren…

Right as well as nutrition partioning. But neither of these two things change the basic calorie in vs calories out concept. They both can increase the calories burned making it harder to be in a daily surplus but as far as people not being able to eat 6k calories a day without eating junk food I think it’s bullshit.

With the exception of people on extremely restrictive diets like sing who is vegan. I could see how this could be a major challenge.

sing who is vegan

Is it a choice due to indigestion from meat/dairy products, environmental or animal compassion @Singhbuilder

I think on 6k cals/day you’d gain mass regardless… there’s no way tren chows through calories like that… it’s an anabolic steroid, not a DNP + amphetamine + beta 2 agonist combo

Could you potentially do me a solid and share a recipe? I’m sick of milk + peanut butter and a banana (however I don’t like to eat in such a surplus, I like to go about 2-300 cals above maintenance) but one of these shakes per day would make life far easier.

This is the main reason for being vegan yes. I’m not one of those preachy vegans though, I don’t care what people decide to eat as long as I am personally not contributing to animal slaughter.

I’m not one of those preachy vegans though

So you’re not like my brother, who casually pops in every convo “it’d be great if you guys went vegetarian” or “at least I don’t contribute towards ANIMAL SUFFERING!!!” as a vocal point of argument in relation to something totally unrelated.

Synthetic, laboratory produced meat should be around within a decade or so… look out for that yeet. Or you can walk down to Australia and take the eggs laid by our chickens (on the farmland I live on) KNOWING we don’t slaughter them… Hen’s can lay eggs without the presence of a rooster, thus the egg is unfertilised

Should also be mentioned (as it’s interesting), my bother (twin) is incredibly smart, as are both my parents 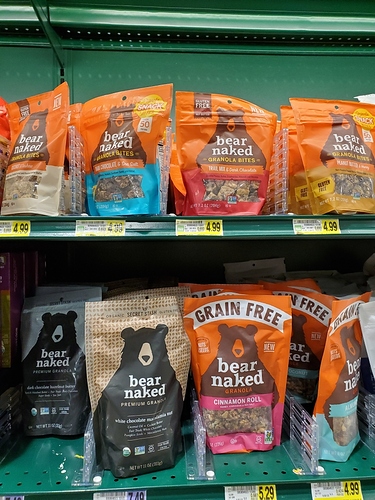 I use a lot of different granola. There is a bunch of different kinds (sugar free, gluten free, fat free, etc) so you can decide what the macros are. It’s a calorie dense foods that blends great. My base is always milk along with a scoop or 2 of whey. Then I add granola and blend. On average granola is around 100-200 cal per 1/4-1/3 cup depending on if it’s the sugar/low fat kind or if it’s the rich kind with nuts and shit. As you can imagine it’s very easy to make a 1000 cal shake the milk and protein base already make up about 400 cals.

I dont use peanut butter anymore in shakes it’s just unnecessary fat. Plus I have a daily 2 am pb&j so don’t want to over do it.

FYI this isn’t cheap. I easily spend $50 a week on granola.

Could you potentially do me a solid and share a recipe?

Thank you all for the replies!

Yes, i felt that too on tren, that you need to eat more. If i use the same calories for a bulk with only test, with tren, its not going to be enough lol.

Also i dont do drugs. I did when i was younger, but its the past now. I very rarely drink nowdays but never on cycle.

I may change my cycle and remove the tren. Im going to be off until january. But i dont want to touch deca lol. Maybe test and dbol going to be it. Or test and anadrol (oxy).

I’m sure there is cheaper alternatives but this is quick and easy and tatse really good.