Could help to circumvent traffic jams... 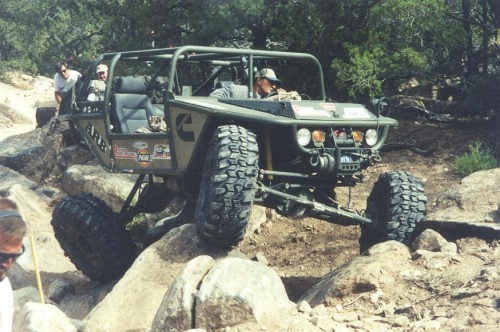 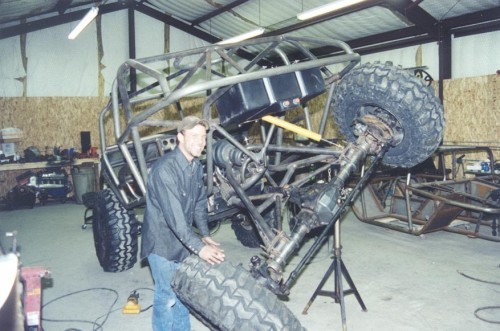 Another one. Articulation anybody? 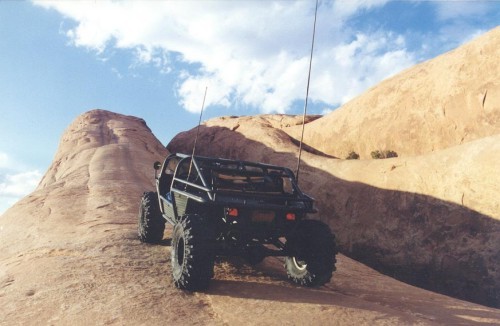 (The one with the lady was done in winter, so no babeskin shots available. The machine gun in the same unposted pic helps ehehehhe.)

There’s supposed to be an H3 Hummer coming out, smaller than the H2 and H1. Arnold No Last Name Required is supposedly helping with the design.

Anybody seen any pics or sketches?

You guys seen any of these “off road only” tubes running around? I live in minnesota so the only ones i see are in pictures. We have mud bogs here, but no rock climbing comps and obviously no dunes.

Rock/dune buggies is what they started as, becoming quite popular in the rock climbing competitions now. Very complex suckers too, not cheap.

As for H3, it’s planned to be built off the new “midsize” gm platform. The formerly known as s-10, now gonna be the colorado. Forgot the gmc name.

Pretty much looks like the others, very high familial resemblence (that is selling point obviously). And, like the H2, easier to operate on roads (unlike H1 which is really a brute). 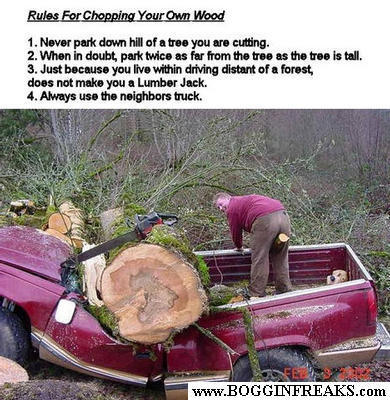 One good picture I got from the first site…Wood Chopping Rules. LOL

That fucker would turn heads at the Dairy Queen, that’s for sure.

DEMODICK: Big fan of Marcinko too?

DAN C: Yeah, I used to read his stuff when I was in college. At the time, I also had a pony tail and a beard. One of my roommates was a huge Marcinko fan and we used to watch the Red Cell video for laughs (yeah, I know it’s a little weird). He started calling me Demo Dick after a day at the shooting range.

The “.50” is a reference to a belt fed .50 caliber machine gun. Tripod mount one on that bad boy and you got a whole shitload of fun! Imagine what they’d do at the drive thru…

Hey demo dick, you ever see the pics of that wicked cool suburban G. Gordon liddy was making for export to foreign heads of state?

It was a 3/4 ton suburban with a built 454, and had that lovely mod, which was a minigun that would pop through a hatch in the roof when it was time to DANCE.

Guaranteed to attract lots of attention from numbnuts who were ill prepared to attack that head of state.

Antiliberal, that should be available as an option on civilian models. I guaran-fucking-tee you carjacking would become a thing of the past.

Well, I bet if it does seem like a good option for carjacking you will see it in south africa in not too long of a time.

You read anything about that place?

I’m not familiar with the gun laws in South Africa, but I’d wager that it’s pretty tough to get a concealed carry permit there. If it was easy, then they wouldn’t be backpedaling to get the problem under control.

Well demo dick, that is actually the odd part.

Conceal permits are easy to get, but the problem started of course due to apartheid, and the lack of basic rights/equality among citizens.

I’ve actually heard that in the bad parts of SA, carry permits are as common as driver’s licenses.

Normally your line of thought works just fine, especially in america where it’s been proven in every state that has gone that route. SA though is still way behind the times due to their past. I mean you still have parts of towns that are filled with the “rich whites” living behind tall privacy fences and driving bmw’s, and then in the next 'burb over you have poor people who dont even have running water and an 80% unemployment rate. I dont care what you do, until that sort of problem is fixed you are gonna have crime like no tomorrow.
I have a few buddies who are native SA citizens but wont move back there for many years(if ever) due to the crime issue. And that is even though most professional type jobs are in high demand and pay well enough for you to live like a king there.

Point taken. You gotta have some semblance of stability to begin with.

Cool pics of the Scorpion. I like the one on the “Lion’s Back.” (any one who’s been to Moab and done Slick Rock knows this one) Been there a couple times. Not really challenging in the traditional off-road sense. The initial take off is the trickiest part – something close to a 3-ft 45-degree take off from sand. Once you’re up, then it’s a straight shot to the top, then a tight turn around, and shoot for the tire tracks over the edge. I saw footage of a lady losing her brakes just over the edge. Lucky she didn’t die from that one. She managed to keep it on the ridge until the last 50 feet, then nosed down into the sand.