Thanks for any help.

I thought you owned a brand new BMW?

Okay, now flame the shit out of me for syaing this.

I won’t flame you:-) I’m looking for a w/e car since I use my other one for work (and can write off the mileage, etc.).

Really depends on the club. If it’s geared towards restorers, then you can count on finding some high prices. If the club is just folks getting together for weekend drives and shit, you might have better luck finding what you’re looking for price-wise.

[quote]tekgrl wrote:
I won’t flame you:-) I’m looking for a w/e car since I use my other one for work (and can write off the mileage, etc.).
[/quote]

Good, cuz I was only fucking around anyway.

I know this thread is about 'vettes, but what series BMW do you have? I’m jealous.

deffinently find some smaller, more “regional” clubs to check out. I purchased my last 03 Cobra through STLmustangs.com since I am from the STL area and saved about $2,000 versus a dealer (which I never buy used from)or private owner and, if its just a w/e car, you probably wouldn’t mind a few go fast goodies and most of those guys have some nice parts on their cars if they are on forums…I saved $1500 alone in parts as well…thats just my .02, good luck bro

I’m sorry Tekgrl, you are not allowed to have a vette. To have a vette, you must be a man over 30 and have a mustache. If you don’t believe me, look at the drivers of all vettes you pass for the next few days. You then know I’m speaking the truth.

You might want to check out Bloomington Gold if you can wait till June and travel to the Chicago area:

Welcome to Bloomington Gold-Home to one of the World's Largest Corvette Shows!

If not the biggest it’s one of the biggest Vette shows in the country and they have a large auction (everything from non-running frames to high priced restorations).

I haven’t been for a while, but last time I was there they had many cars like you’re looking for on auction, that looked to be going for pretty reasonable prices. Best picture in my mind from the auction was a guy standing with the car he was selling on one side and his 8 month pregnant wife on the other. Good Luck

Why are you interested in the years that you listed? I was under the impression that because of laws at the time, those years would have much weaker engines than its predecessors or followers.

Don’t know if it matters to you, but insurance on a Vette is usually pretty high.

If you are going to buy any of the year vette’s you listed, they will be “underpowered” compared to older or newer Vettes.

If the Vette has Cross-Fire Fuel Injection, stay away from it as these are now to never work correctly.

1975 is the last year for a convertible in this bodystyle.

1978 was the first year with the “bubble” rear window.

Of the body styles you chose, I think the early to mid nineties had the sleekest look coupled with better performance and reliability. Not to mention a shitload of performance parts that can be purchase through many aftermarket retailers.

Check out this site for tips on the different generations…
http://www.corvetteblackbook.com/

I don’t see any real need to join or go through a club to buy a Vette…It’s just like buying any car. Check it out competely, long test drives and all that good stuff. The above poster supplied tons of good info on the Vettes and for the mid teens you should be able to get a pristine one.

The later 3rd gen vettes are crap, suffering the full brunt of emission controls before the development of technology to reclaim the horsepower. A modern Civic would embarrass one. Though if you just want a boulevard cruiser I guess that wouldn’t matter. Build quality is likely to be abysmal though. Car & Driver didn’t have anything good to say about Corvette fit and finish until very recently. 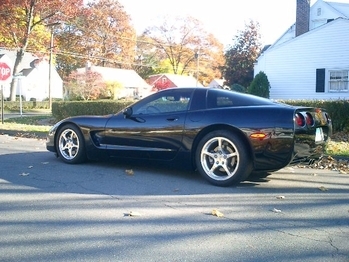 I suspect you are targeting those model years based on price, if not you may want to reevaluate.

Reliability and those model years aren’t exactly synonomous, and per some of the other posters, performance is going to be relatively anemic unless they are far from stock.

c3 and c4 are whack as a heart attack.

[quote]ryanlamaster wrote:
c3 and c4 are whack as a heart attack.

Your smokin crack, the 68-72 C3 vettes are where it’s at. The styling of those cars can compete with any other car ever made. They aren’t as fast as a brand new vette but with a 427 ci engine putting out 435HP they aren’t too shabby either.

If your going to get an older car of any kind expect that it’s not going to be as reliable as a newer car. Expect to fix it yourself or pay a lot in repair bills. I would buy one from an enthusiast that has taken care of it and knows what he is talking about. If you get the cheapest one you can find then you’ll end up paying more for it in the end.

I’ll second taking a look at corvetteforum.com, it’s a good place to get an idea of what you want and how much you can expect to pay.