I have been reading for quite a while on this site. One thing I was looking for was a good cookbook to get some new healthy recipes from. I sort of cycle through my current meals as the month goes. Most of the cookbooks advertised by other sites seem to be gimmicks. I am looking for a good cookbook. I am a good cook so the more advanced cookbooks would not bother me, but the simpler the meal the cheaper it will be.

Both are awesome, classic, and have tons of information about food, recipes, preparation, etcetera. They should be in everyone’s kitchen.

Cook’s Illustrated is the bible of deliciousness, but they’ve been doing a “light and healthy” collection that’s pretty darn good. I’ve weaned my wife off of Betty Crocker brownies and onto their 1/3 calories brownies. The recipes aren’t up to T standards, they aren’t low-carb or anything, they just have 1/3 of the calories and are still good enough to serve to company.

Like I said, not low carb, but low calorie.

Some other stuff CI has is how to flawlessly grill salmon. Grilled wild salmon is like eating fish butter. Mmm. Get a filet, SKIN ON (that’s important). Marinate in some soy, a little honey, a little sesame oil, some hot pepper. Crank up the grill, get the grate as close to the fire as you can. When you’re ready to grill, wipe down the grates with some paper towels soaked in veggie oil. There will be some flame. Don’t be a pussy. Put the filets down skin side down. Cook for three minutes or until dark char marks form. While that’s happening, spray the topsides down with nonstick cooking spray. Using tongs and a spatula, slip the salmon hunks onto the flesh side, cook another two minutes. Take them off and eat them!

I might have added that last bit. I love salmon. I love honey too. I was bit by a bear once.

Thank you both I will look into those cookbooks.

We also have a free forum for that:

you have to have a certain level of skill to make his recipes, but you can always learn by doing…thats how i did anyway…

I hit up used bookstores for vegetarian cookbooks.

What? You need some fiber with those chicken breasts.

I really been enjoying Ad Hoc by Thomas Keller. 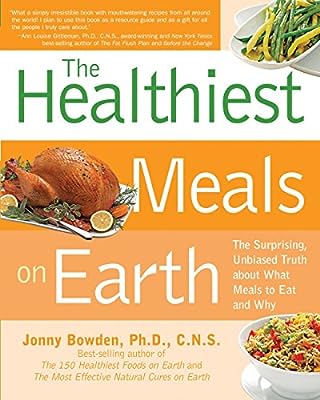 Healthiest Meals on Earth: The Surprising, Unbiased Truth About What Meals to Eat and Why

The first cookbook from best-selling author Jonny Bowden! Jonny Bowden's The Healthiest Meals on Earth contains recipes for more than sixty dishes and drinks that use nutritious and healthy cooking me ...