Connor Mcgregor UFC 223 Incident. Jail Time? Is His Career Over?

So Mystic Mac appears to have made a big mistake. I wonder if he can use his powers to predict how he will come out of this one.

Long story short. Artem Lobov gets punked by Khabib backstage. Connor gets wind of it hops on his jet from Ireland to NY. Goes to a presser pretty much starts a small riot. Goes to where Khabib is at. Tells him to get off his bus. Of course he doesn’t. Connor smashes out a few windows on the van. Apparently there were multiple injuries.

I guess that could be labeled a “gangsta move” not letting his home boy get rolled up on without consequence but damn man he could have not thrown stuff and injured people. Now he is going to jail going to get sued might not be able to fight again.

I know someone who has been involved with UFC and they are claiming this is all orchestrated to build a huge event for McGregor vs. Khabib down the line. Hard to imagine but maybe. 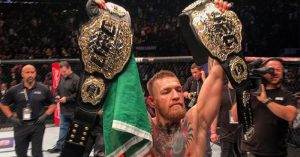 Three fights cancelled. I’ve never seen a bigger mess in the UFC before. I enjoyed his tenure with the UFC while it lasted. Hope his Mayweather fight money can last even after he gets sued.

Let’s hope his “career” is over because (IMHO) he has always been a cancer on the sport. MMA and the UFC are better off without him.

So I could definitely consider that a possibility. But don’t you think they could have created the drama without losing three fights on the card?

They say there are multiple injuries. This I have a hard time believing. Those glass windows are meant to shatter in such a way that minimizes chance of getting cut. Not saying its out the realm of possibilities. But any cut from that kinda glass is more likely to be a scratch. I’ve shattered a few right into my face and no cuts.

And to the people on the bus saying they thought they were going to die. Really? That is a bit dramatic.

But I think canceled 3 fights adds to the drama.

Agreed, Dana White doesn’t think small…and losing 3 fights on a card without any huge draw already is a drop in the bucket compared to what a grudge fight involving mcgregor is going to draw.

I don’t think a setup would revolve around a felony. There is an athletic commission to answer to and it’s NY. The UFC had a hard enough time getting mma legalized there. This is some Alex Jones level thinking.

Maybe they were cuts from the objects that were thrown through the windows.

He was arrested and had a preliminary hearing on 4 charges, including assault. This is nothing but an exceptional moron. This is a professional athlete? This is someone you want you child to “look up to”? . Call it for what it is: A spoiled child who wants the media attention, who threw a hand truck through a bus window. The fight game has always been dirty , but, the UFC as an organization will lose all credibility if they allow this “professional” to ever fight in their organization again. However, I predict they will, because, over the last few years, well ever since they started promoting this piece of crap, they have been in a tail spin of sleaze.

Its a sad day when the WWE will have more ethics and integrity that the UFC.

Based on what I saw no objects went through the window. A dolly was thrown at the bus broke window and fell to floor.

Here is video of Chiesas cut.

Thats like the equivalent of cutting yourself with a razor. Kinda shock they pulled him for that.

Also in the extended clip you can see Ray Borg who was claiming he got glass in his eyes but he was totally fine and wearing glasses. This definitely seems suspect now.

Well if you believe the people that say the UFC is creating drama to sell fights like the WWE then can you really hate on the Connor McGregor the way you are right now. Because if thats true then he is just playing a character and how he acts on behalf of the UFC to sell fights might not be indicative of who he really is.

He is a great fighter. Fun to watch. Entertaining trash talk. His flamboyance and eccentricities make him interesting. There have always been characters like that. Roy Jones Junior. Shannon Briggs. Ali. Briggs harassed Klitchsko in the lead up to their fight. Point being is Connors behavior is not exactly uncommon in the fight world. But the incident from the other nights is definitely too much. I am inclined to believe it has all been orchestrated to sell ppv. We will see if once these charges get settled if they book Connor vs Khabib. If that happens then this was all definitely to build hype.

This is much worse an incident from a while ago, it helped sell a fight that there wasn’t much attention in before, real brawling, real injuries, threats of shooting. I feel this is pretty much the same, staged incident that got taken too far.

Even if this is legite connor will probably not get in as much trouble for it as he should. he’s rich and famous and brings in alot of $$$$ for The UFC

I am inclined to believe it has all been orchestrated to sell ppv. We will see if once these charges get settled if they book Connor vs Khabib. If that happens then this was all definitely to build hype.

Totally orchestrated bullshit. Maybe everybody wasn’t in on it, but it was all premeditated on Connor’s part. He may have gone too far and actually have to do time, but when he gets out the amount of money he’ll make on the comeback fight will be mind blowing.

This is someone you want you child to “look up to”?

Not sure what you meant by that, so these are just my thoughts on looking up to a sports fighter.

I’m not sure I’d want a child to look up to any sports fighter. A sports fighter effectively gives people brain damage for money & fame - it’s barbaric.

Bear in mind I do a martial art. I view it as mostly a discipline that helps humility & a little as a necessary evil so I can protect myself… but doing it for money & fame… the next generation need more enlightenment not more ego.

If he’s a convicted felon he may never work in the USA again.

They didn’t need to do that to book that fight. If Conor wants to fight again he’s facing khabib regardless.

I hate to use this term but he’s white trash.