I was wondering what the process is of obtaining one. Does it just pertain to firearms, or can you have knives and shit too?

I live in both Hawaii and Idaho, if that helps. I am unfamiliar with the laws. I have been trying to familiarize myself with them, with google and wiki, but to no avail.

How do you live in two spots at once?

Don’t answer that, it wasn’t a serious question.

guessing he has two homes, one vacation home in Hawaii, I’m assuming?

You should do your research with the states your living in… but can’t you just conceal shit in your pooper?

Just google, it will help.

How to Videos, Articles & More - Discover the expert in you. | eHow.com

Learn how to do just about everything at eHow. Find expert advice along with How To videos and articles, including instructions on how to make, cook, grow, or do almost anything.

different states are different.
I would go down and ask these questions to the local state police, they are the ones that issue the permits.
I know where I live it is legal to carry a knife no permit needed.
but rule of thumb is if the blade is shorter than the width of your palm its ok.

now being that I have my CCW I still am not allowed to walk around with swords and cleavers and such.
there is a limit on what you can do

usually a ccw means nothing more than you can walk around with your handgun hidden from plain veiw
but again ask the local state police.
and the laws in hawaii are probably different from idaho so you might want to ask both

Don’t get your hopes up as far as Hawaii goes. Gun laws are pretty much just stupid there. Idaho shouldn’t be much of a problem, though.

Here in Montana all I had to do was go to a class that covered firearm safety and the legality of using deadly force. They gave me a certificate after I completed the class and I can just take it to some office and they give me my license.

The laws can be drastically different depending on where you live, though. If you can’t find anything on the intrawebz about it, just try asking someone behind the counter at a local gun shop. They’ll probably be able to point you in the right direction.

And yes, you can carry all kinds of stuff with a CCW. At least in Montana. I remember going through the safety/lawfulness class and there was a big list of what you could carry with a CCW. It had swords and knives and brass knuckles and all that good stuff. You just have to make sure nobody ever sees them or you could get hit with disturbing the peace and such.

EDIT: Here’re a couple links for the process in Idaho: http://www.ehow.com/how_2061095_get-permit-carry-concealed-weapon.html 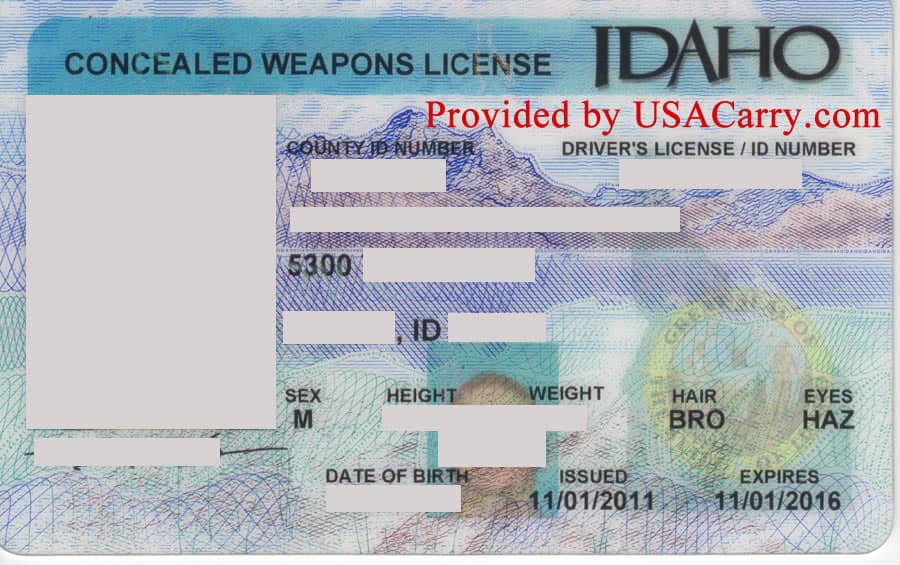 I have no idea how accurate they are since I’ve never tried to get a CCW in Idaho, but they should at least get you going.

And here’s one for Hawaii: http://www.usacarry.com/hawaii_concealed_carry_permit_information.html

Again, I don’t know how accurate it is, but at least give it a look.

Just open carry when you’re in Idaho. But if you insist on getting a license, both Idaho and Washington are shall-issue. I got my Washington license but it works in Idaho as well.

Any gun range or gun store worth it’s salt should have plenty of information on how to obtain a CHL. CHLs are almost always handled by the Department of Public Safety so check your state’s DPS web page for info. At any of the large book store chains, like Barnes and Noble, the sport section is also the shooting/hunting section. There you should find 2 or 3 books on concealed handguns, home defense, or the like. Theses books will tend to have a state by state listing contact resources and requirements for a CHL.

To obtain a CHL you will generally need:

A good CHL class should be able to take care of 4 out of the 6 requirements. You should be able to leave the course, go straight to the notary public, ad then drop the whole package into the mail. If you pass the background check then your license should show up by mail in 2-6 weeks.

As far as everything else goes, thanks for the info. I guess my best option is to go to either the sheriff’s department or the local gun shops.

Hawaii seems much stiffer than Idaho, ironically, as it is more dangerous in a few areas than Idaho could ever dream of.

oh, and aznt0rk…I am in love with your avatar.