So admittedly this sub doesn’t get much action, but anyways…

I am not an Oly lifter (primarily train the deadlift, back squat, and front squat because they’re my personal favorites) but appreciate many different strength disciplines - powerlifting, weightlifting, Strongman, and CrossFit alike.

A couple of recent developments from weightlifting which have caught my eye:

First, CJ Cummings clean & jerked an incredible 185 kg at 69 kilos at the youth world championships en route to winning the title. Cummings continues to look like the best hope for a male USA weightlifting medalist in some time.

That jerk…I mean, what?! How the hell did he…

Second, although this is less notable on an international level than CJ Cummings winning a world youth title, another decent prospect of local interest (to me) has appeared in the form of 94-kilo lifter DJ Shuttleworth, training at Garage Strength. The gym was founded by a guy named Dane Miller, who I competed against in high school football and track…Dane went on to throw in college at Penn State before founding Garage Strength. Shuttleworth played football at the same high school as Miller, then played at small-college Wilkes University, and took up Oly lifting after that. He’s made a huge leap in the last year, and recently hit a 200kg clean & jerk (which at least puts him on the bubble of being competitive for an Olympic spot). 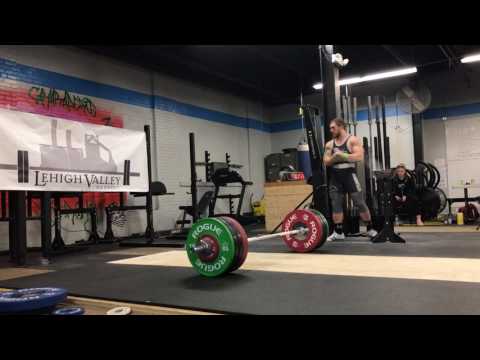 CJ is awesome. An awesome lifter, and an awesome attention getter for the sport. So far… a great ambassador. Have you seen Harrison Maurus… also throwing up some huge lifts.

CJs technique does not make sense to me. Definitely a few modifications from traditional. Hard to argue though with a guy who just keeps breaking his own record, one meet at a time, one steady kilo at a time. I think he was in second after the snatch, but then beat the other guy by… 19 in the clean and jerk.

It is a long quad, probably a bit early to seriously speculate on how many spots the US will have and who the representatives will be. Colin Burns just made his first 200k clean and jerk in competition, while also attempting to break his own American snatch record with a 174. Who knows if Jared Fleming can come back from the ACL and Norik Vardanian from the back surgery.

The way Wes Kitts is coming along (trains with Harrison) it looks as if he and CJ will be the top two ranked lifters. If Caine improves on his numbers… he could be up there as well.

BTW… did your guy get white lights on that 200? It looks like a pretty clear elbow touch from the angle it was shot.

BTW… did your guy get white lights on that 200? It looks like a pretty clear elbow touch from the angle it was shot.

I believe he did get passed, judging from his coaches’ reaction and the fact that they posted it on their Facebook page after the meet…it was a small-town meet so I’m not sure who was judging, but upon re-watching the video you are right about the elbow touch. On the bright side, he has made sufficient strength progress to get 200kg out of the hole and jerk it, so I suppose he’ll have to hit it again on a bigger stage with, um, “cleaner” technique.

This is not US, but this is probably my favorite training hall video. Artem’s speed is incredible. I try to mimic him in a sense. The speed is the only reason I can get under decent weights for my level with a low squat poundage.

In terms of US lifters, I love CJ (heard he only front squats), but I think Colin Burns is pretty legit. For a bigger guy, his stance is pretty narrow.

It’s interesting to me how everyone’s technique is so different. For example a coach would never teach this:

But obviously it’s working for him. I’m at my 2nd pull so quickly because my tibia is really short compared to my femur, so I literally only pull for 3-4 inches before I’m in the 2nd pull lol.

I think that America doesn’t truly have a “system” yet, maybe because they haven’t done it as long as some of these other countries. I had a friend go to Russia a few years back just to learn Olympic lifting (he’s networking guy, so can work remotely) and he told me for the first 7 months, they didn’t let him add weight to the bar at all! But by the time he added weight his technique was so dialed in that weight just started flying because he was strong and mobile enough to do everything.

That is interesting. I’ve been to several world championships and always spent time in the training hall, in addition to when our guys were training. Of course, the Russians were high on the must see list. I recall watching them once and thinking, “it looks as though they have done this before”. Consistency stood out, every lift looked the same, bar speed, movement, precise positions, over and over. It didn’t matter how much weight was used, it was robotic.

Something to think about in our training protocols.

What do you guys think about CJ switching things up and going with a power jerk? Is he trying to defect to China with this new form???

In all seriousness though, a few weeks ago (maybe a month or two at this point) he bombed out in a meet because he couldn’t stick his power jerks. From what I’ve seen in training recently he looks like he’s getting it down pretty well.

CJ Cummings: The hero America needs, not the one it deserves.

His split jerk always looked like a bit of a mess at heavy weights, so I think it was a decent idea. Obviously his first meet was rough, but long term it may still be the right move. I’ve seen a video of him hitting at least a 180kg squat jerk in training, so it’s in there.

Even with the poor jerk showing a couple months ago, it’s encouraging that his snatch (by far the weaker of the two for him) continues to progress.