Cheney, Own Branch of Govt.

Come on, that’s just fucking funny!!! And it’s a good indication how arrogant the White House has gotten.

No comments on Dick “Fourthbranch” Cheney?

So Cheney backed off his claim that he isn’t part of the Executive Branch. Which leads me to ask…

He submits a legal rationale for why he doesn’t need to comply with the law, and then changes his mind the next day? Was that a joke? Are there clowns running the show in the White House? Really, were they serious when they proposed that, or was it part of an elaborate gag?

Isn’t that a little fishy to radically change your legal game plan like that, over the course of a day? Doesn’t that indicate a certain amount of disorganization, if not desperation?

Impeach Cheney
The vice president has run utterly amok and must be stopped. 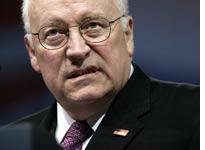 Under Dick Cheney, the office of the vice president has been transformed from a tiny acorn into an unprecedented giant oak. In grasping and exercising...

There is little doubt that both Buish and Cheney are guilty of “crimes” that are impeachable.

However the people who can impeach him do not want to, the Republicans will never impeach a fellow Republican and the Democrats want to save their energy for 08.